Fruit Of Washington’s Meddling In The Ukraine: Brawls In Parliament, Civil Strife Across The Land

Today, another fistfight between pro-Russia separatists and loyalists broke out in parliament.

In response to the renewed violence, US Secretary of State John Kerry accused Russia of “Creating Pretext for Invasion”, while Russia said Ukraine’s response could trigger a civil war.

The protesters stormed regional government buildings in the industrial hub of Donetsk and security service offices in nearby Luhansk, waving Russian flags and demanding a Crimea-style referendum on joining Russia. 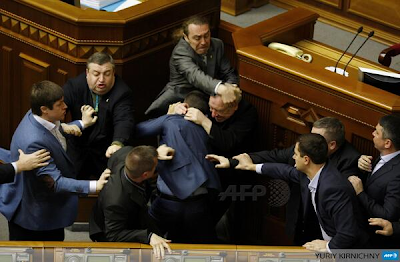 A brawl broke out during a meeting of parliament in Kiev today, after communist leader Petro Symonenko accused his political opponents of contributing to the Crimea crisis by using extreme tactics to oust former president Viktor Yanukovych. The comments riled two nationalist leaders, who ran at the podium to physically stop him from speaking.

Link if video does not play: Violent Brawl at Kiev Parliament

Ukraine’s state security service on Tuesday said that pro-Russian separatists had placed explosives in a building they seized in the eastern city of Luhansk and were holding 60 people hostage.

“The criminals have rigged the building with explosives … and are holding around 60 people, threatening them with weapons and explosives,” the SBU security service said in a statement. “They are using terrorist measures.”

But one of the protest leaders told Reuters that there were no explosives and that no one was being prevented from leaving the building. “We do not need hostages to get what we want,” said Anton, who declined to give his second name.

A Reuters reporter said people appeared to be moving freely in and out of the building.

The Luhansk building was one of several seized by protesters in the east of the country demanding regional referendums on independence from Kiev.

Protesters in Donetsk remain in control of the main regional authority building, but authorities ended the occupation in the city of Kharkiv.

The US has accused Russia of fomenting unrest in eastern Ukraine, calling its efforts “illegal and illegitimate” and warning that Moscow was seeking to create a pretext for possible military action.

“What we see from Russia is an illegal and illegitimate effort to destabilise a sovereign state,” John Kerry, the US secretary of state, told lawmakers in Washington.

“This could potentially be a contrived pretext for military intervention just as we saw in Crimea,” Mr Kerry said, adding: “No one should be fooled.”

Ukrainian police on Tuesday regained control of a government building occupied by pro-Kremlin separatists in one volatile eastern city as pro-Russian protesters in another appeared to be slipping into disarray.

As Ukraine’s new government pushed to show its authority in the region, Russia warned that the use of force to dislodge demonstrators who had taken over government offices could plunge the country into civil war.

Pro-Russian protests had flared up in Ukraine’s eastern cities after the ouster of President Viktor Yanukovych in late February, but had appeared recently to be fading. They reignited Sunday as crowds of several hundred seized government buildings in the three cities.

In Donetsk, protesters declared the founding of the “Donetsk People’s Republic” and demanded a referendum on independence from Ukraine. Ukraine’s wealthiest man, Rinat Akhmetov, a Donetsk native who had been a member of Mr. Yanukovych’s political party, reportedly met with the separatists in Donetsk and urged them to negotiate with the government.

Meanwhile in Moscow, Russian Foreign Minister Sergei Lavrov said that representatives of pro-Russian elements in eastern and southern Ukraine should be allowed to participate in multilateral talks with Russia, the U.S. and the European Union and the new government in Kiev aimed at calming tensions.

He accused Kiev of ignoring the interests of the eastern and southern part of the country and said the crisis couldn’t be resolved without taking the demands of the region into account.

I do not believe this leads to civil war, but if it does, the US will be more to blame than Russia. It was the US that helped orchestrate the overthrow of pro-Russia president Viktor Yanukovych.
Mike “Mish” Shedlock
http://globaleconomicanalysis.blogspot.com