Germans aren’t exactly big stock-market investors. Only 7% of their wealth is tied up in stocks, globally. And only a portion of that is in German stocks. So the movement of German stocks doesn’t impact Germans much.

Despite zero interest rates at the bank, and in some cases negative interest rates, Germans hang on to their beloved idea of cash-in-bank. They might not make any money, but at least they don’t have to deal with a rigged market, pay unknown amounts in fees out the back of their brokerage accounts and mutual funds, and then get whacked by a 20% loss, watching 10 years’ worth of savings dissolve into the ether in five months. And Germans with more money pour it into real estate.

But foreign investors are on the hook, particularly American investors via hedge funds, stock mutual funds, and ETFs. Over the past couple of years, brokers and financial advisors have been pushing Americans to diversify into European stocks. And some of the biggest European stocks are German stocks.

The German economy wasn’t exactly roaring ahead in the second half of 2014 and in the first half of 2015, with GDP growth bouncing between 1.2% and 1.6% annualized. Even the US did better than that.

But German stocks soared, starting in mid-October, 2014. Well-placed rumors started to circulate that the omnipotent ECB would launch a big round of QE in 2015. These rumors were supported by more rumors and a combination of official non-denials and vague indications that a big round of QE would indeed be forthcoming. Details emerged over time. American investors, having gotten richer and richer with each round of the Fed’s QE, piled into the German miracle market, and it simply soared and soared. Bonds soared too, and yields became more and more negative. Those were amazing times.

Then the omnipotent ECB actually announced QE: it would be huge. More details trickled out later. It would be an even huger €60 billion a month. But it wouldn’t start until March. The buying frenzy kicked off in earnest, and eventually even the German 10-year yield approached zero, and the DAX hit 12,391, having skyrocketed 48% in six months.

It was April 9, and QE was pouring into the markets. Folks were practically praying to the omnipotent ECB. But it was the final paroxysm of a QE front-running frenzy by American hedge funds and everyone else. It was the end of the bull market.

And then came the rout.

The German economy plugged along as before, but people took profits after this sort of China-bubble-like run, and even while China was still soaring, German stocks began to swoon.

In the wake of the Fed’s widely ridiculed “none and done” decision, the DAX plunged 3.1% today and is down 20% from its peak. This daily chart shows the rocket-like 48% 5-month ascent and the vertigo-inducing plunge: 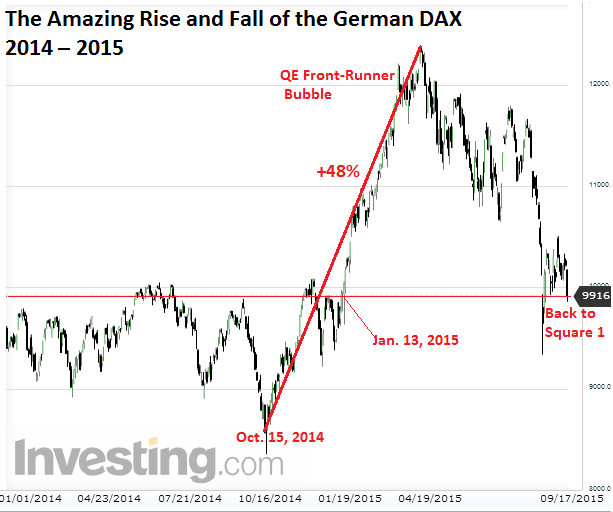 Today, the five biggest sinners of the DAX, which tracks 30 major German companies, were particularly colorful:

RWE plummeted 8.1%. The utility is among the largest electricity and gas producers in Europe with €48 billion in revenues in 2014. It’s also struggling with the EU’s “far-reaching structural changes,” as it calls them. Its shares have plummeted 56.4% since May and are down 88.7% since their peak in early 2008.

Deutsche Bank, like banks in the US, plunged 4.4% today. It keeps lumbering from scandal to scandal that are now layered so thickly that most mortals have given up counting them. Its latest involves allegations over bribery in Russia, and it’s now shutting down most of its operations there. Shares are down 21% since early August and 76% off their all-time high in 2007.

Siemens dropped 4.3% today. The industrial giant with big operations in the US, among other countries, had its own share of scandals, including bribery, a new CEO to clean it up, and another new CEO to turn it around, but this time hopefully without bribery. Might be tough. Shares are down 23% since March, and down 32% from their all-time peak before the Financial Crisis.

Daimler also dropped 4.3% today. But its cars, unlike those of its competitors, are once again hot in China despite the turmoil. Nevertheless, it’s down 31.8% from its peak in March.

These are paragons of corporate Germany. They’re not some over-hyped startups without revenues. And yet, they’ve gotten totally crushed. The wealth effect is unwinding: wealth has been transferred effectively to those who got in early and got out in time, from those who didn’t.

But here’s the thing: Draghi’s QE is still cranking relentlessly. The ECB’s deposit rate is still negative -0.2%. Monetary policy at its best. Nothing has changed. Except that the ECB has lost its omnipotence. Turns out, omnipotence only works if people believe in it. And now that people no longer believe in it, more bouts of QE in Europe, Japan (where QE is also failing to prop up stocks), the US, and elsewhere are likely to flop with even more spectacular results.

Bank shares got crushed in the US too. Because not all is well in banking land. Read… Bankers Threaten Fed with Layoffs if it Doesn’t Raise Rates