Undue tightening by the US Federal Reserve could set off a perfect storm of recessionary effects
Global stock and bond markets have been all over the place of late. Rarely have investors been so lacking in conviction. Confusion as to future direction reigns, and with good reason after the spectacular returns of recent years.

For how much longer can stock markets keep delivering? Is there another recession on the way, or to the contrary, is growth likely to surprise positively, underpinning current valuations? Economic turning points are never easy to spot, but right now it’s proving harder than ever.

The immediate cause of all this uncertainty is, however, fairly obvious. It’s the US Federal Reserve again, and quite how far it is prepared to go with the present tightening cycle. Few expect policy makers to act at this week’s meeting of the Federal Open Market Committee.

Even so, a number of its members have once again been making hawkish noises, and another rise in rates by the end of the year is widely anticipated.

Indeed, it is on the face of it quite hard to see how the Fed can avoid such action. Already at 2.3pc, core inflation in the US is trending higher. The US labour market continues to tighten, and money growth, for some a key lead indicator, is strong.

On the stitch in time principle, the Fed ought to be acting now to head off the possibility of over heating further down the line. Policymakers are also desperate to return to some semblance of “normality” after the long, post financial crisis aberration in rates, if only to give themselves room for monetary stimulus when the next downturn does eventually materialise. If there were a recession now, there’s not a lot in the armoury to throw at it.

None the less, the “R” word is once again on many people’s lips. No policymaker would want to raise rates into an impending downturn, even if, historically, they quite frequently seem to make precisely this mistake. Is the Fed about to conform to type, and tip the economy back into recession?

According to Chris Watling, chief market strategist at Longview Economics, a wide range of indicators confirm the message: recession risks are rising. And if a recession is indeed looming, it almost certainly means a bear market in equities. Looking at all the US recessions of the last 77 years, Mr Watling finds that there is only one (1945) which has not been accompanied by a stock market correction.

Complicating matters further is an ever more worrisome phenomenon – that both bond and equity markets are being artificially propped up by central bank money printing. Further easing this week from the Bank of Japan would only deepen the problem. Yet eventually it must end, and when it does, share prices globally will return to earth with a bump. Only lack of alternatives for today’s ever rising wall of money seems to hold them aloft.

Over the last year, central bank manipulation of markets has reached ludicrous levels, far beyond the “quantitative easing” used to mitigate the early stages of the crisis. Through long use, “unconventional monetary policy” of the original sort has become ineffective, and, well, simply conventional in nature.

To get pushback, central banks have been straying ever further onto the wild-west frontiers of monetary policy. Today it’s not just government bonds which are being bought up by the lorry load, but corporate debt, and in the case of the Bank of Japan and the Swiss National Bank (SNB), even high risk equities.

Never mind the national debt, much of which is already on the Bank of Japan’s (BoJ) balance sheet, the Japanese central bank is steadily nationalising the Japanese stock market too. According to estimates compiled by Bloomberg from the central bank’s exchange traded fund holdings, the BoJ is on course to become the top shareholder in 55 of Japan’s biggest companies by the end of next year.

From the sublime to the ridiculous, the SNB now owns $1.5bn of shares in Facebook and is one of the biggest shareholders in Apple. Meanwhile, both the Bank of England and the European Central Bank have announced massive corporate bond buying programmes, including, in the BoE’s case the sterling bonds of the aforementioned Apple. Quite how that’s meant to benefit the UK economy is anyone’s guess.

For global corporations at least, credit has never been so free and easy, encouraging aggressive share buy-back programmes. This in turn further inflates valuations already in danger of losing all touch with underlying fundamentals. By the by, it also helps trigger lucrative executive bonus awards.

Where’s the real earnings and productivity growth to justify the present state of stock markets? As long as the central bank is there to do the dirty work, it scarcely seems to matter.

In any case, the situation seems ever more precarious and unsustainable. Conventional pricing signals have all but disappeared, swept away by a tsunami of newly created money. Globally, the misallocation of capital must already be on a par with what happened in the run-up to the financial crisis, and possibly worse given the continued build-up of debt since then.

Something similar may already be underway today. Financial conditions have tightened considerably since the summer; the dollar has strengthened, stocks have sold off, at least in the US, and bond yields have risen.

The pattern is a familiar one, in which markets tighten by just enough to deter central bankers from actually going through with the deed and lifting rates. It proved hard enough for the Fed to cease QE. Raising rates by a quarter of a point from zero proved equally long winded and traumatic.

Raising them further may be just as taxing. Every time the Fed hints at doing so, markets counter by threatening to tip the economy back into recession. It’s a brutal tread mill that policy makers have made for themselves; getting off without breaking a leg is proving hard to impossible.

Both main US presidential candidates promise fiscal stimulus should they win. China is also set on a path of fiscal easing, at least for now, while even in Britain there is some possibility of fiscal expansion in response to the Brexit vote. This may ease the path of future interest rate increases somewhat. Unwise to count on it, though. Rates have been too low for too long. It’s an almost guaranteed recipe for mishap. 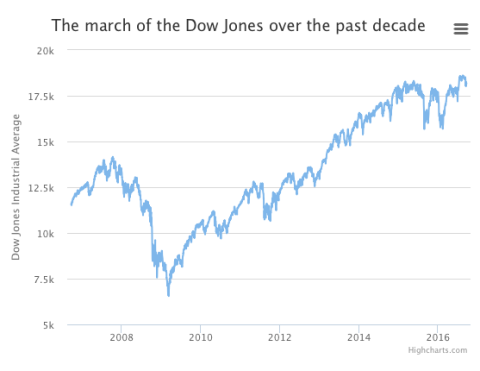 Source: Get ready for the mother of all stock market corrections once central banks cease their money printing