Ghost of Mario Savio Rising at Berkeley: Kudos to You, Rand Paul 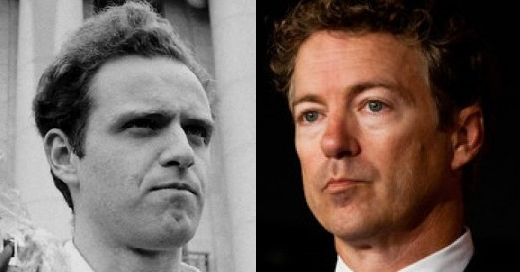 It’s early, but I am pleased to report enthusiasm for Ran Paul is growing, and in the right places. Please consider Rand Paul gets standing ovation at Berkeley: ‘Your right to privacy is under assault’

Delivering a rare speech for a Republican at this bastion of liberalism, Kentucky Sen. Rand Paul on Wednesday was given multiple standing ovations by the left-wing audience after railing against government surveillance and warning the students: “Your right to privacy is under assault.”

“I am here to tell you that if you own a cell phone, you’re under surveillance,” he told the crowd.

Paul’s address at the Berkeley Forum on the campus of the University of California at Berkeley focused on the National Security Agency’s collection of telephone metadata and the debate over privacy.

During his remarks, the potential 2016 Republican candidate discussed California Sen. Dianne Feinstein’s claim that the CIA had spied on her congressional staff, and announced that he plans to call for a special committee on Capitol Hill to investigate the domestic spying by government agencies .

“No one should be allowed to invade your privacy,” Paul said. “That’s why I’m announcing today that when I return to Washington, I will push for a select committee styled after the Church Committee that investigated the abuses of power of the intelligence committee in the 70s. It should be bipartisan. It should be independent, and wide reaching. It should have full power to investigate and reform those who spy on us in the name of protecting us.”

That Paul decided to take his libertarian-leaning message to one of the most liberal campuses in the country is no mistake. He is actively making an effort to appear before crowds that have not been supportive of Republicans to demonstrate his ability to appeal to a broader electorate.

To win in 2016, a Republican better do more than appeal to core Republicans who will never vote for Hillary Clinton or whoever the Democrat candidate is.

Republicans need independent voters for sure. Youth support would be icing on the cake. Thus, I like Paul’s strategy a lot.

Hopefully Republican infighting does not take him down.

Time to rally around Paul!