While understandably all eyes have been fixed on every monthly capital outflow update from China (even the ones that thePolitburo is clearly massaging), few have noticed that one of the biggest total outflows currently in the global developedeconomy is taking place right in America’s own back yard.

According to BofA’s Kamal Sharma, Canada’s basic balance – a combination of the capital and the current account: a measure of national accounts that spans everything from trade to financial-market flows – swung from a surplus of 4.2% of GDP to a deficit of 7.9% in the 12 months ending in June. That’s the fastest one-year deterioration among 10 major developed nations.

Citing Sharma’s data Bloomberg writes that “money is flooding out of Canada at the fastest pace in the developed world as the nation’s decade-long oil boom comes to an end and little else looks ready to take the industry’s place as an economic driver.” In fact, based on the chart below, the outflow is the fastest on record. 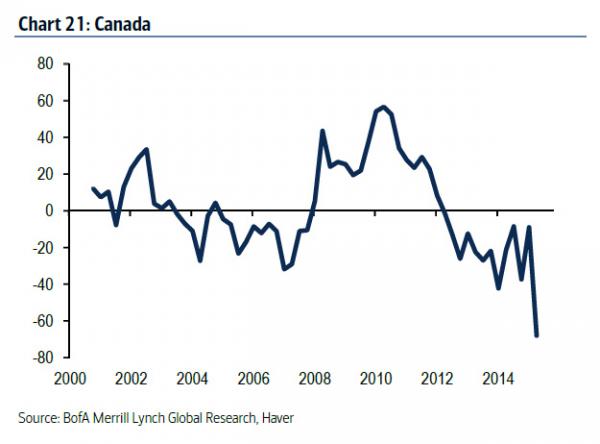 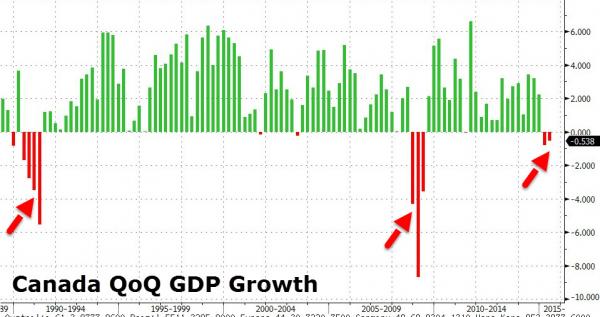 Earlier today, Canada’s manufacturing sector got even more bad news when the latest RBC Canadian Manufacturing PMI survey dropped to a record low in October, with output, new orders and employment all declining since the previous month. Moreover, new export sales dropped for the first time since April, with survey respondents noting that weaker global economic conditions had weighed on new business volumes.

In other words, not even the tumbling loonie is helping boost exports: a bedrock assumption of modern monetary policy.

Meanwhile, input costs rose at a sharp and accelerated pace in October, which placed pressure on operating margins and contributed to a further slight increase in factory gate charges.

Finally, the country is expected to post its 12th straight merchandise trade deficit this week, according to every economist in a Bloomberg survey.

Perhaps it is ironic: a year after we predicted the death of the petrodollar would cripple Emerging Markets around the globe (something which was confirmed in the China devaluation/EM debt crisis of 2015) the nation most impacted by the collapse in oil is neither China, nor – as many had expected – Russia, but what to many is a bedrock of economic stability: the AAA rated Canada.

How long until not Putin but Harper’s successor is seen in the White House, begging Obama to put an end to QE so that the US shale sector, thanks to infinite junk bond refills courtesy of the Federal Reserve and “investors” allocating other people’s money, will mercifully die and prevent Canada’s economy from sliding from recession into an outright depression?