Global Cooling Alert: US IS Awash In Glut Of Scrap Materials

By JAMES R. HAGERTY and BOB TITA at The Wall Street Journal

American companies have complained for the past year that the headwinds of a strong dollar and a slowing Chinese economy are hurting their earnings.

For sellers of scrap metal, used cardboard boxes, and other waste, those headwinds are more like a hurricane.

Waste has long been a major U.S. export, providing material to be melted in foreign steel mills or made into new paper products. But the strength of the dollar has made American waste pricier abroad, cutting demand in China, Turkey and other markets.

Bob Hooper scavenges dumpsters and roadsides around Pittsburgh looking for steel, aluminum and other metals. But he’s finding it harder to make a living. Photo: Jeff Swensen for The Wall Street Journal

U.S. exports of scrap materials have fallen by 36% since peaking at $32.6 billion 2011. Prices of shredded scrap steel have plunged about 18% so far this year and are down 41% since early 2012, according data collected by the Platts unit of McGraw Hill Financial Inc. The dollar is up about 17% since last July against a basket of major currencies compiled by the Federal Reserve.

That has been hard on the network of waste dealers and scrap gatherers who are the backbone of the industry.

Bob Hooper, who goes by Hoop, finds discarded metal on curbs and in dumpsters around Pittsburgh and carries it to scrapyards in a rusting Chevy pickup with a bungee cord to keep the driver’s door shut. He was making as much as $400 a day selling scrap just three years ago, he said. “Now I’m doing $100 to $200.”

Or less. On a recent day, he hauled in more than 1,000 pounds of scrap, including two discarded refrigerators, a water heater and a broken microwave buried in egg shells and other moist trash. After gasoline expenses, he netted about $80.

Get the latest news and analysis on logistics and supply chain via an email newsletter. Sign up. And see complete coverage at WSJ.com/Logistics

Turkey, whose steel mills are big users of scrap, has been buying less from the U.S. and more from Russia, Ukraine and other places with weaker currencies. Meanwhile, U.S. steel production has fallen in response to more imports, so American producers are buying less scrap.

Demand for old paper and boxes also is down in the U.S. The average price for used corrugated cardboard has fallen 27% in the past year to $77 a ton, according to Pulp & Paper Week.

The recent labor dispute at West Coast ports disrupted exports, forcing buyers like China to find other sources and creating a glut in the U.S.

Waste and scrap remains a big business. Last year it accounted for 1.3% of U.S. exports, about the same as meat and poultry, and bigger than either corn or computers. The industry directly employs about 149,000 people, according to the Institute of Scrap Recycling Industries, a trade group. That doesn’t count self-employed people like Mr. Hooper.

On a recent day, Mr. Hooper hauled in more than 1,000 pounds of scrap, including two discarded refrigerators, a water heater and a broken microwave. After expenses, he netted about $80. 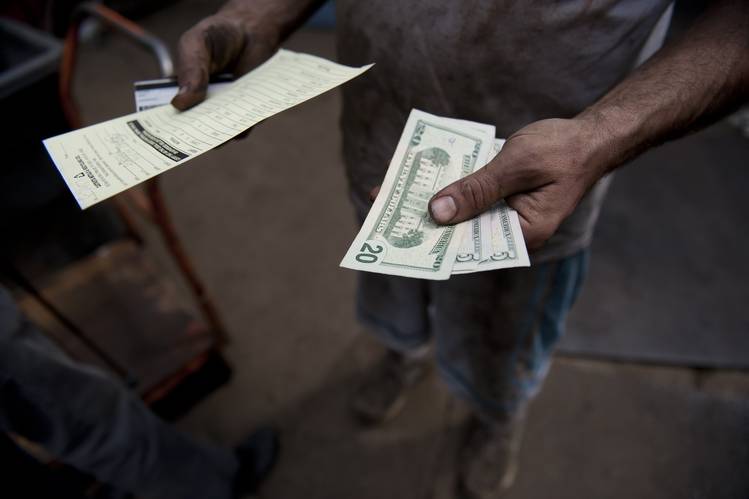 ENLARGE
On a recent day, Mr. Hooper hauled in more than 1,000 pounds of scrap, including two discarded refrigerators, a water heater and a broken microwave. After expenses, he netted about $80. PHOTO: JEFF SWENSEN FOR THE WALL STREET FOR THE WALL STREET JOURNAL

After a steep drop in scrap prices earlier this year, “things seem to have stabilized a little,” said Joe Pickard, economist for the trade group. But the outlook hinges on a pickup in global manufacturing, which is currently sluggish.

When China was booming, scrap dealers focused heavily on that market. Ships that carried furniture and other household goods from China to California returned stuffed with old metal and boxes ready to be converted into new products. That traffic has slowed.

“Clearly, it’s been a great run for a number of years,” said Alan Dick, president of Los Angeles-based Alpert & Alpert Iron & Metal Inc. As demand from China wanes, he hopes Vietnam, Thailand and Malaysia will buy more U.S. scrap. Combined they might provide enough demand to keep his 85-year-old company alive for another generation, he said. 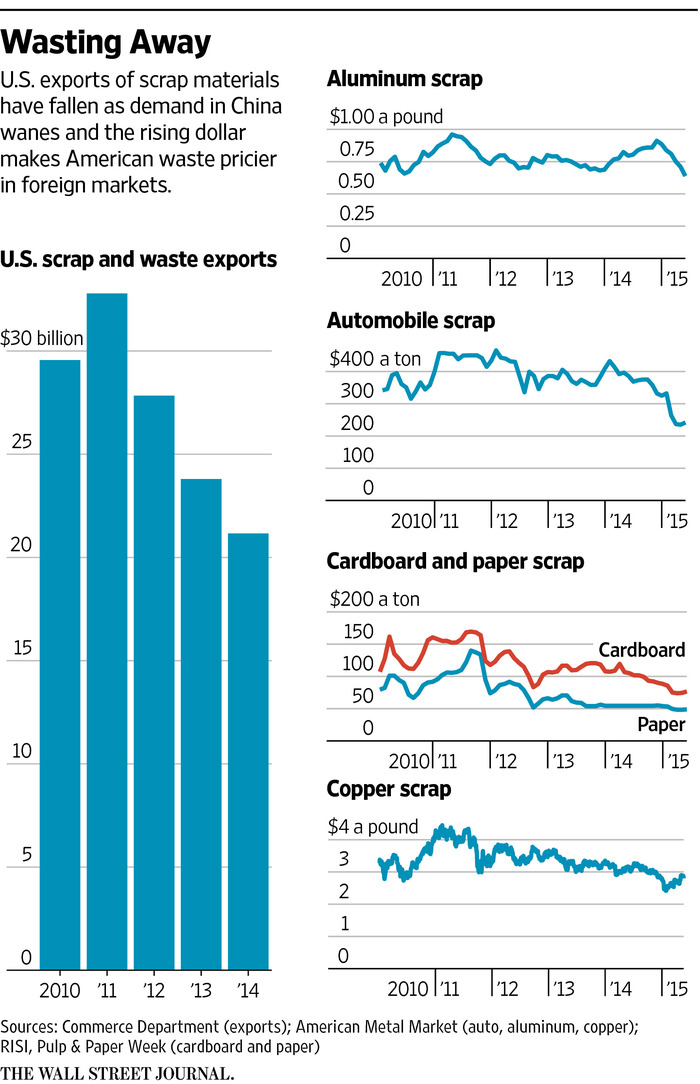 Warren Rosenfeld, president of Calbag Metals Co., a scrap metals dealer in Portland, Ore., said he fears a long-term decline in the U.S. scrap industry. As people in China buy and wear out more cars and refrigerators, they create a larger supply of domestic scrap, he said, reducing the need for imports from the U.S.

Another worry for scrap-metals dealers is that new cars contain less steel these days as manufacturers reduce vehicle weights to improve fuel economy, said Randy Castriota, owner of Castriota Metals & Recycling in Pittsburgh. Cars also stay longer on the road—and out of the scrap pool.

Mr. Castriota, who employs about 30 people, had to lay off four a few months ago. A shortage of truck drivers has forced him to pay more to haul scrap to his customers. Insurance costs are up, too.

One beneficiary of lower scrap prices is Nucor Corp., the largest U.S. steelmaker, which makes most of its steel from melted scrap rather than iron ore. Chief Executive John Ferriola told investors recently that profit margins for scrap processors have been severely compressed, adding, “We expect to see some people not making it through this very difficult time.”

Nucor, he said, may take advantage of the downturn by acquiring distressed scrap-processing businesses. “We won’t be shy,” he said. “We’ll be at the table.”

Joel Litman, co-owner of Texas Recycling/Surplus Inc. in Dallas, worries that “prices can get so low that you can’t even cover your processing costs.” Texas Recycling collects high-grade waste paper from various businesses and sells the material to dealers for use in tissue paper, paper towels and other paper products used by restaurants and the food service industry.

With the current glut, he said, “there’s just a lot of paper out there that cannot get consumed fast enough.”

Source: U.S. Is Awash in Glut of Scrap Materials – WSJ