Last month, we noted that according to JP Morgan, persistently low oil prices are set to create a $75 billion headwind for global equities in 2016.

At issue are sovereign wealth funds, many of which are funded with proceeds from oil sales. For years, producers were next exporters of capital. That is, they funneled their crude revenue into a variety of assets including USTs and other core paper as well as equities and real estate.

All of that changed late in 2014 when Saudi Arabia moved to bankrupt the US shale sector by deliberately suppressing prices. Crude’s collapse meant revenues no longer exceeded expenses and suddenly, producing countries found themselves running deficits. That in turn left two options: tap the debt markets or tap the rainy day, SWF piggy banks.

We’ve seen this dynamic play out in Saudi Arabia where SAMA reserves have been steadily sliding as Riyadh struggles to fund a deficit that amounted to 16% of GDP in 2016 and is set to come in at 13% this year. And then there’s Norway, whose SWF is the largest in the world at $830 billion. Lower for longer crude has hit the country’s economy hard, but competitive devaluations from the likes of the ECB and the Riksbank have prevented the krone from weakening enough to absorb the blow. In order to help shield the economy from excessive damage, the country is resorting to fiscal stimulus which officials are paying for by tapping the oil fund. 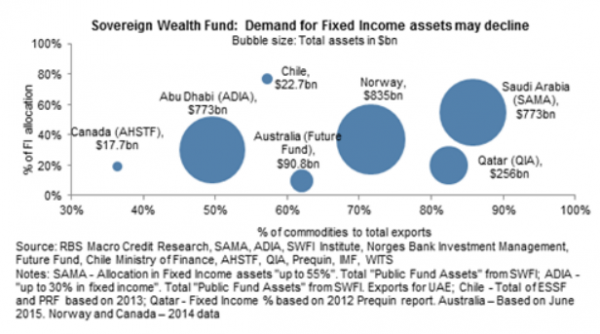 To let JPMorgan tell it, all of the above will lead to a $75 billion outflow from global stocks this year. “Assuming selling in accordance to the average allocation of FX Reserve Managers and SWF across asset classes, we estimate that the sales of bonds by oil producing countries will increase from -$45bn in 2015 to -$110bn in 2016 and that the sales of public equities will increase from -$10bn in 2015 to -$75bn in 2016,” the bank wrote, in a note out last month. “There is little offset to this -$75bn of equity sales from accumulation of SWF assets by oil consuming countries, as we expect these countries to spend most of this year’s oil income windfall.”

That figure, JPM went on to note, “isn’t huge,” but considering the bank thinks retail investor flows may actually flatline in 2016, SWF selling could have a significant impact.

Well according to the Sovereign Wealth Fund Institute, JPM’s numbers are off. By a lot.

That’s fairly substantial. And even those numbers might well be optimistic. On Sunday, the National Bank of Abu Dhabi PJSC said oil prices might well “spike down towards $20.” “For at least the next few years there do appear to be solid fundamental reasons why oil prices are likely to remain in a trading range, a report reads. That “range” tops out at $45 but is $25 on the low end and if prices remain below $30, it’s entirely reasonable to suspect that nearly a half trillion in SWF money could flee global equities by the end of the year.

To what extent that’s offset by buying by the likes of the SNB and the BoJ is an open question, but do note that SWFs have more than $7 trillion in total. If even a quarter of that comes out of global markets (and we’re talking about fixed income here as well)it would amount to a meaningful reduction in global liquidity just as the world careens into recession on the back of China’s rapidly decelerating growth machine.

As a reminder, here’s a handy list of the world’s SWFs: 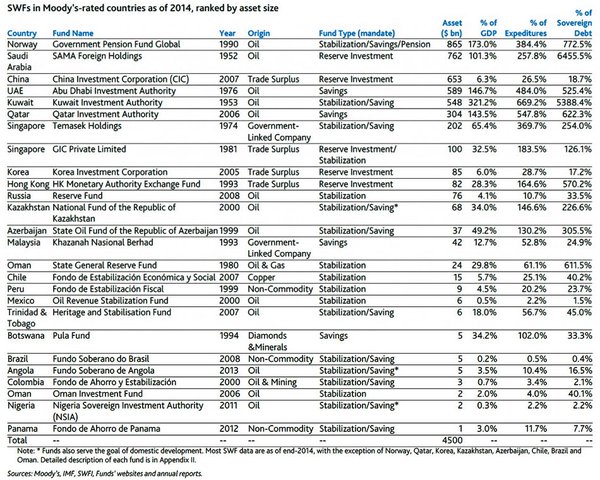 Source: Sovereign Wealth Funds May Sell Half Trillion in Stocks This Year