If you’re a miner, this is “not the time for courage” (to borrow a classic Gartman-ism).

The global slump in commodities shows no sign of abating and a stubborn OPEC isn’t doing anything to help matters. Meanwhile, China’s economy continues to decelerate and while last night’s trade data showed demand “improving”, it’s important to put the import “beat” in context – imports still fell by nearly 9% Y/Y last month and while iron ore imports were up M/M in November, average prices for the first eleven months of 2015 are still down more than 39%. As MNI notes, “customs data showed that after seasonal adjustment, November imports were still 3.6% lower than a month ago.”

All of this has become par for the course and indeed, it now appears we may have entered a new era where sluggish global growth and trade has become the norm.

Against this backdrop, commodities producers (both at the state and company level) are struggling to survive. The world is mired in a global deflationary supply glut, and without a commensurate pickup in aggregate demand, it looks like the oversupply and overcapacity problem may be here to stay.

In the latest example of just how bad things have gotten, Anglo American – the world’s fifth largest miner – just kitchen sink-ed it, announcing a sweeping restructuring, a massive round of layoffs, and a dividend cut. The company will reduce its assets by some 60% while headcount will be cut by a whopping 85,000 or, nearly two thirds. 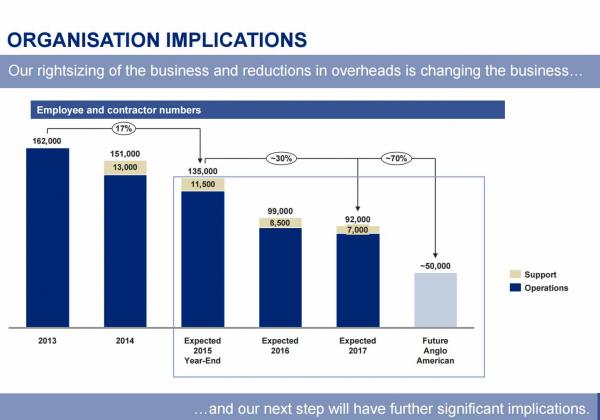 “We think the best answer for our shareholders is to go down to smaller, high quality, more resilient portfolio where we think we can deploy capital more effectively,” Anglo American Chief Executive Mark Cutifani said Tuesday. 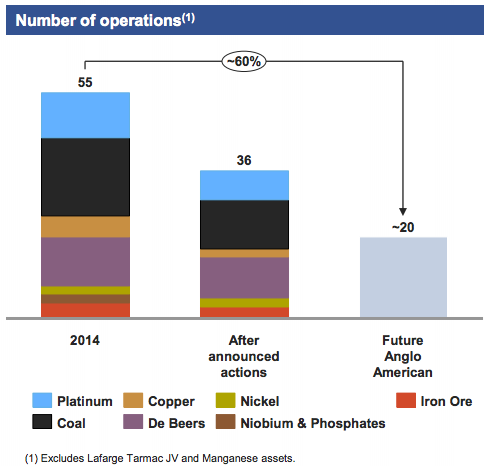 Maybe, but shareholders weren’t happy to see their payout cut for H2 and for the entirety of next year. The stock fell sharply, dropping nearly than 10% at one point to a record low. “Anglo fell 7.9 percent to 339.95 pence by 11:12 a.m. in London, giving the company a market value of $6.5 billion. The shares earlier touched the lowest since being listed in 1999. The last time Anglo cut its dividend, during the depths of the global financial crisis in 2009, the shares plunged 17 percent in one day,” Bloomberg reminds us.

“No one likes to suspend a dividend,” Cutifani said on a call with reporters. “We think it’s the right thing to do to make sure the company remains in good shape.”

As of now, the company will dump its niobium and phosphates business and will increased its divestment target from $3bn to $4bn but CEO Mark Cutifani says there could be more to come. “We are open to possibilities but in this market there will also be some closures. Any asset that is cash-negative will not remain in the portfolio it is a strategic call and we are not going to look back.”

Writedowns due to market conditions and business closures are set to total between $3.7 billion and $4.7 billion while capex for 2016 will now be $700 million lower than the $3.9 billion forecast. 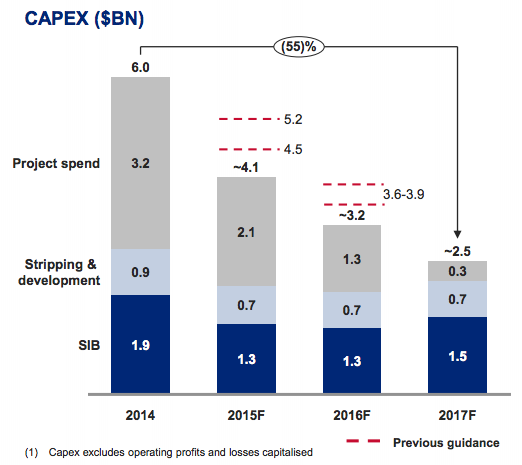 As FT notes, “the decision confirms an industry pullback from investment. Rio Tinto also said on Tuesday that it would cut capex in 2016 from $6bn to about $5bn.” 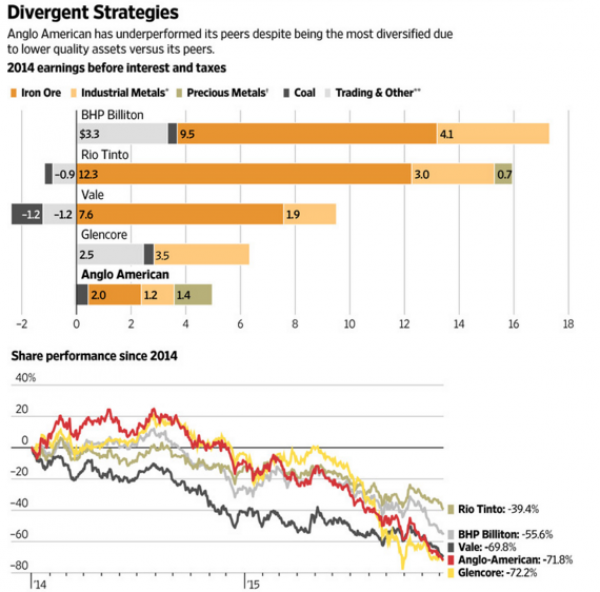 “After the restructuring, Anglo will be a much smaller company,” Bloomberg goes on to note, adding that “it will control 20 to 25 assets split across three divisions of its De Beers diamond unit, industrial metals and bulk commodities. Anglo currently has about 55 assets.”

Here’s a bullet point summary of the portfolio restructuring from Citi who has Anglo at Neutral/High Risk:

Meanwhile, WSJ notes that “the company’s majority owned unit, South African miner Anglo American Platinum Ltd., said that its 2015 profit would be at least 20% lower than it was last year.”

“[The company] just released a business update, announcing (i) headcount cuts of 2,300 people, (ii) R14bn of impairments, (iii) further capex cuts, and (iv) an update on asset sales,” Citi recounts, before saying that “although all these are necessary, they do not solve the core problem of oversupply in the industry, nor ensure AMS’s long-term profitability.”

Right. And we can probably say the same thing for the parent, because as we’ve said on too many occasions to count of late, the world’s engine of global growth and trade (China) is at damn near stall speed and the outlook for commodities is decidedly grim.