Shipping is a strong indication on the health or weakness of the global economy. So let’s take a look at what’s happening.

The world’s biggest container-ship operator is altering course, slashing jobs and canceling or delaying orders for new vessels after years weathering a sharp downturn in the container-shipping market.

Danish conglomerate A.P. Møller-Maersk A/S said Wednesday its Maersk Line container-shipping unit would cut 4,000 jobs from its land-based staff of 23,000. It is also canceling options to buy six Triple-E vessels, the world’s largest container ships, to cope with the deepest market slump in the industry since the 2009 global financial crisis. Maersk said it would also push back plans to purchase eight slightly smaller vessels.

After issuing a surprise profit warning last month, Maersk signaled it, too, was no longer immune to a combination of slowing global growth and massive container ship overcapacity on many routes.

The conglomerate said it would cut its annual administration costs by $250 million over the next two years and would cancel 35 scheduled voyages in the fourth quarter. That is on top of four regularly scheduled sailings it canceled earlier in the year. 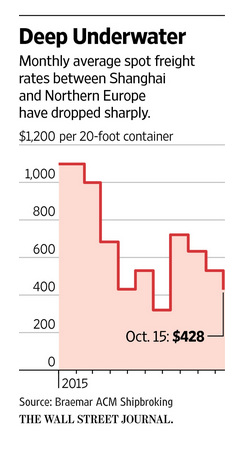 Over-Capacity Crisis, Next Year Will be Worse

Ship & Bunker reports Box Markets are in an Over-Capacity Crisis, Next Year Will be Worse

Credit managers may well be keeping an even closer eye on box carriers next year, following a warning from Drewry that the sector is set to face even tougher times in 2016 as the in-balance of supply and demand slides to its worst since financial crisis hit 2009.

And the research agency says the slump could last for several years.

“The container shipping industry is in the midst of an over-capacity crisis which will worsen next year,” Neil Dekker, director of container shipping research at Drewry said in an emailed note accompanying the release of its 2015 edition of the Container Market Annual Review and Forecast 2015/16.

Drewry says it has now slashed its container shipping growth forecast for 2015 to just 2.2 percent, while the 1.6 million TEU of extra capacity that has been added this year is the equivalent of a growth rate of 7.7 percent.

As a result, the firm says its Global Supply/Demand Index indicating the relative balance of vessel capacity and cargo demand in the market (where 100 equals equilibrium) has fallen to a reading of 91 in 2015, its lowest level since 2009.

Last week Ship & Bunker reported that Maersk Line was forced to idle one of its 18,000-TEU Triple-E containerships, and has cooled on an option to order another eight 14,000-TEU containerships. 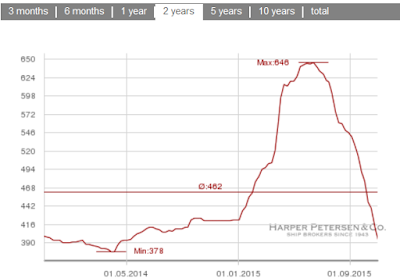 Do the above articles represent overbuilding of shipping capacity or a slowing global economy?

The answer is likely both. Cancellation of new ship orders is likely overcapacity. However, cutbacks of scheduled routes in the peak season of shipping likely represents falling demand.

Don’t Sleep in the Subway

On the personal side, my wife Liz and I are in Zion National Park right now.

We have some beautiful images this trip. On Thursday we have a back country permit to hike the “subway”. This is an all day hike to a spectacular slot canyon.

Interested parties may wish to consider this description of The Subway From the Bottom.

Top down requires rappelling straight into a huge pool of water, then swimming to a hiking spot. Not exactly what we want to do in November, not to mention well beyond our technical capabilities.

I may not post again today until this evening. On Saturday, we plan to hike the “Zion Narrows“.