Good Job, Mario———More Signs The Eurozone Is Grinding To A Halt

Europe’s economic recovery is showing dangerous signs of falling flat after another disappointing set of data from the single currency.

September’s combined Purchasing Manager’s Index (PMI) of the services and manufacturing sector fell to 53.6, from 54.3 in August. This suggests momentum has petered out after a spike in activity over the summer.

The weak numbers all but guarantee the European Central Bank will be pushed into further stimulus measures, ramping up its €1 trillion quantitative easing programme.

Economists suggest an announcement on more QE could be due at the end of the year.

“The failure of the economy to pick up speed over the summer will be a disappointment to the ECB, especially with job creation sliding to an eight-month low”, said Chris Williamson, chief economist at Markit.

“The weakening of the pace of expansion in September raises the risk of growth fading further in the fourth quarter, which would in turn boost the likelihood of the ECB opening the QE taps further.”

September’s numbers suggest growth remained stuck at 0.4pc in the third quarter of the year, unchanged from the same period last year when the ECB had not yet launched QE.

“The decline in the composite PMI could be a sign that the positive effects of lower oil prices and the weaker euro are starting to fade,” said Jack Allen at Capital Economics.

Deflation also returned to the eurozone last month, with consumer prices turning negative at -0.1pc for the first time in six months. 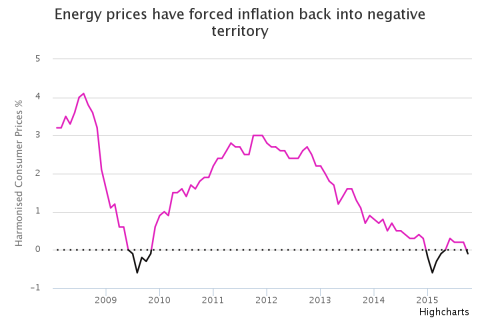 “The upside for growth in a number of eurozone countries continues to be limited by relatively poor competitiveness amid ongoing significant structural problems.”

France managed a better-than-expected performance, with its PMI reading coming in at 51.9 – a two-month high. Any figure over 50 indicates expansion.

But in a sign that global growth worries are set to hinder the continent’s producers, French business optimism fell to its lowest point since December 2014.

Voters in France, which has been one of the eurozone’s biggest economic laggards, head to the polls in 2016 amid rising euroscepticism.

Source: More signs the stuttering eurozone is grinding to a halt – Telegraph