Good Luck With That! Having The World’s 2nd Highest Debt Ratio, Portugal To Get Anti-Austerity Socialist/Communist Government

Portugal’s Communists and radical Left Bloc are poised to take power in a historic departure as part of an anti-austerity coalition led by the Socialists, despite being branded too dangerous for office by the country’s president just 11 days ago.

While it is not a replay of the “Syriza moment” in Greece last January, the ascendancy of the Left marks a clear break with the previous austerity regime and with the policies of the now-departed EU-IMF Troika.

“Political risks are rising,” said Alberto Gallo from RBS. While Portugal has been a model of good behaviour in the eurozone until now, largely immune to radical politics, it has extremely high debt levels. He warned that the country may be skating on thin ice.

The bond markets reacted badly to news that the three rival parties had overcome bitter differences and struck a definitive deal on a detailed governing programme. Yields on 10-year Portuguese bonds jumped 21 basis points to 2.86pc. The risk-spread over German Bunds has risen 68 points since March.

A Socialist-led government under Antonio Costa will deprive Germany of a stalwart ally in its efforts to uphold fiscal discipline and drive reform in the eurozone. It has always been crucial to the German political narrative of the EMU debt crisis that the pro-austerity arguments should be made for them by political leaders in the peripheral states.

The change of regime in Lisbon could usher in a clean sweep by Left-leaning forces across southern Europe if the Spanish Socialists unite with the country’s new insurgent parties to dislodge the Right in the country’s elections next month. The race is currently too close to call. 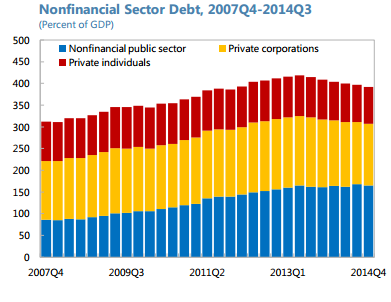 Total non-financial debt is 370pc of GDP, the highest in the world after Japan

There would then be an emerging “Latin bloc” with the heft to confront Germany and push for a fundamental overhaul of EMU economic strategy. At the very least, the political chemistry of the eurozone would change beyond recognition.

Portugal’s Left-wing alliance won a majority in the country’s parliament last month but was initially rebuffed by President Anibal Cavaco Silva, who insisted on re-appointing a conservative government even though it had lost its working majority, and even though the political centre of gravity in the country has shifted markedly to the Left, and austerity fatigue is palpable.

In an incendiary speech he incited Socialist deputies to break ranks with their own party and the support the Right, arguing that it was in effect a national emergency. This high-risk gambit failed totally. The triple-Left has held together, overcoming bitter differences in the past.

Most contentiously, President Cavaco argued that anti-euro and anti-Nato elements of the Left should legitimately be shut out of power to avoid rattling financial markets or endangering euro membership, without seeming to realize the full gravity of what he was suggesting.

“In 40 years of democracy, no government in Portugal has ever depended on the support of anti-European forces, that is to say forces that campaigned to abrogate the Lisbon Treaty, the Fiscal Compact, as well as to take Portugal out of the euro, in addition to wanting the dissolution of NATO,” he said.

“This is the worst moment for a radical change to the foundations of our democracy. It is my duty, within my constitutional powers, to do everything possible to prevent false signals being sent to financial institutions and markets,” he said.

The Socialist leader accused the president of “usurping the powers of parliament” at the time. He has since offered an olive branch as events move his way, and power comes within grasp.

Catarina Martins, the Left Bloc’s leader, said the will of the people had prevailed. “We don’t have a coup here: we have democracy. Whoever lacks the votes in the national assembly cannot form a government,” she said.

As expected, the Communists have agreed to drop their demands for euro exit and a return to the escudo, while the Left Bloc has toned down its eurosceptic language and will no longer push for debt relief.

Mr Costa has pledged to abide by EU rules, but the coalition’s spending ambitions are ultimately incompatible with the Fiscal Compact, and go against the grain of market reforms.

Public sector wages cuts and the pension freeze for state workers are to be reversed. Structural reform is frozen. Plans to privatize the national water group (EGF) and the rest of the airline TAP are to be halted, and a scheme to open transport in Lisbon and Oporto to private competition is on hold.

Pedro Passos Coelho, the outgoing premier, described the plans as the “politics of ruin” and warned the Portuguese people that austerity is not a choice but an absolute imperative if they wish to remain part of the European order. 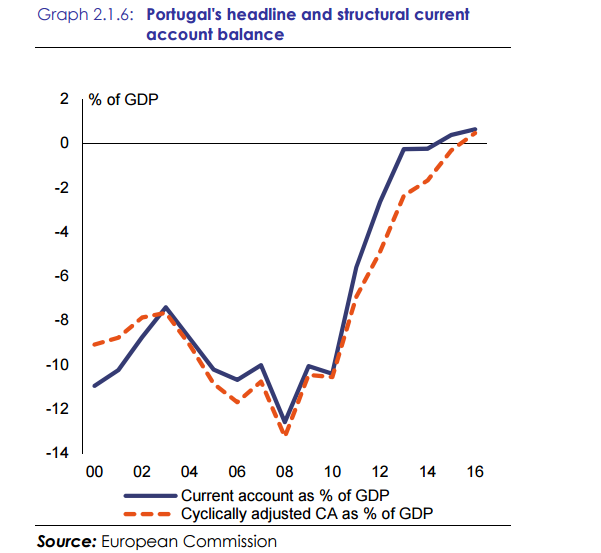 Federico Santi from Eurasia Group said the Left alliance, also allied to the Greens, is likely to be highly unstable, with a “recurring flashpoint” each year as the new budget is passed. “Risks to the fiscal outlook are increasing,” he said.

EU officials are dismayed by plans to raise the minimum wage to €600 a month – plus two months’ bonus – a level that would cover 25pc of all employees. Labour economists say this is extremely high and will entrench unemployment, as well as stifling small business.

“It is very negative and will reduce the dynamism of the economy,” said an EU expert who has had close dealings with the country.

“I am very worried about the way this is going. They are still a poor country. They have not restored competitiveness, and they don’t have the entrepreneurial culture of Greece, but they now think they are safe. I fear there could be a fresh crisis within two or three years,” he said. 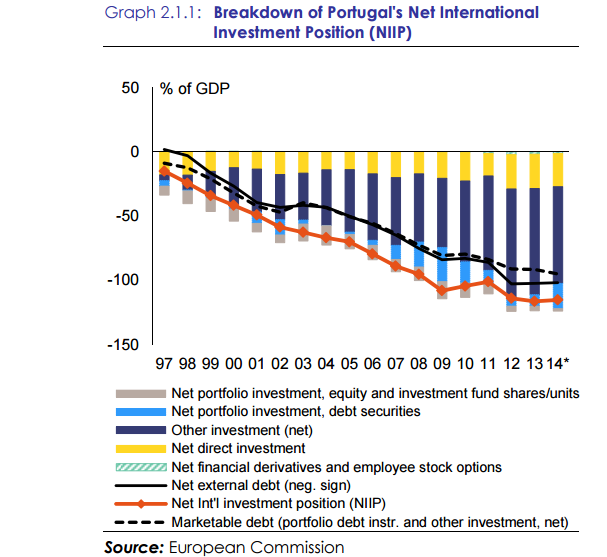 Portugal is shielded from the bond vigilantes as long as the European Central Bank is buying its debt under quantitative easing but it is far from clear whether it really has restored full viability within EMU.

Public and private debt is 370pc of GDP, the second highest in the world after Japan. The budget deficit is still 4.7pc of GDP deep into the country’s Lost Decade, and the net international investment position is minus 116pc and has been getting worse. It is far beyond the -30pc safety line used by the International Monetary Fund.

The IMF says the export miracle is not quite what it seems since there has been a large rise in re-exports with little value added. The country remains acutely vulnerable to any external shock. “A durable rebalancing of the economy has not taken place,” it said.