As we noted before, it is even clear to the locals businesses owners like the Marmalade Café which has seven locations. “First, you have to raise prices, otherwise you’ll be out of business,” owner Selwyn Yosslowitz told the Times. So higher prices for diners. That’s “first.” We imagine you can guess what’s “second.” “We will try to re-engineer the labor force,” Yosslowitz said. “Maybe try to reduce the number of bus boys and ask servers to bus tables.” In other words: “Maybe” we’ll fire some folks and the people who keep their jobs will have to be more efficient.

Yosslowitz also worries about the dynamic we’ve discussed over the course of documenting Wal-Mart’s experience with wage hikes: namely that you have to preserve the wage hierarchy. You can’t hike wages for the lowest paid workers and then expect those further up the pay ladder to be satisfied with what they made before. “The other big worry [is] that employees already making $15 an hour will demand a raise as well”, Yosslowitz said. “It’s a chain reaction.”

Indeed, the problems with haphazard wage hikes are now readily apparent even to those who stand to benefit the most from the new legislation. Take Miguel Sanchez of Highland Park who works two jobs making tortillas. “It’s good for workers, but I imagine this is not going to be good news for employers and small businesses,” he says. “Will the cost of things go up?” he asks. “Are employers going to cut back hours because they can’t afford it? I worry.”

So even tortilla makers get it, but like Wal-Mart, “some folks” will need to actually see the layoffs before they’ll concede that you can’t cheat economic truisms and that’s really a shame for the people who will lose their jobs in the meantime.

But back to CA Governor Brown who after that brief epipharny he quickly forgot about reality, and told the truth about why he was signing the legislation.

“Morally and socially and politically, they (minimum wages) make every sense because it binds the community together and makes sure that parents can take care of their kids in a much more satisfactory way.”

Ah yes, as long as you and your political party get votes in the upcoming elections, the actual impact on the people you claim to represent and care about is irrelevant – noted.

After all, this is what seems to get votes, and as we said previously: “Of course how much you earn and even whether or not you have a job at all only matters to the extent that “shit” costs money, which is why it might be a good idea to just go ahead and vote for “A Future To Believe In”

However, in perhaps the most poetic cause and effect scenario, once the people realize that items such as minimum wage actually do nothing but hurt their chances for gaining employment or starting a small business, they leave the state in droves.

It’s no better in the other “minimum wage hiking state”, New York, where United Van Lines data shows that out of all of their relocation contracts, New York comes in second for “high outbound.”

Now that higher minimum wages are a reality, we’re certain these numbers won’t get any better in future years. 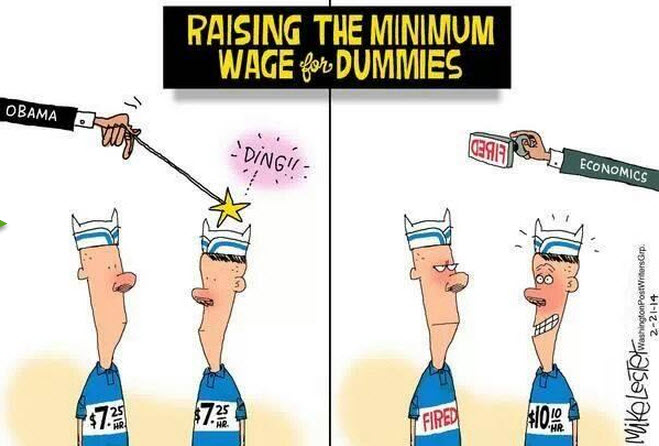