Greece On The Dnieper: With The Ukrainian Currency & Economy Collapsing, IMF Set To Loot What’s Left 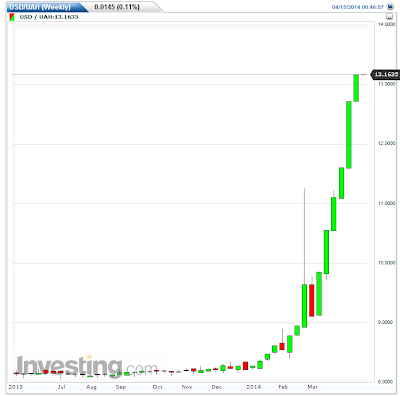 On Monday, the Ukraine central bank pulled out the bazooka with a massive set of rate hikes.

“The central bank considers it necessary to take the step to increase the value of the national currency, to restrain inflation and to stabilise the situation on the money market,” the central bank said in a statement.

Foreign exchange reserves have fallen to barely two months’ import cover, and the finance ministry warned in March that it expected the economy to contract by at least 3 per cent this year.

The International Monetary Fund offered an $18bn package in late March to help Kiev face its economic crisis while it faces mounting external pressure from Russia, which has warned that it will halt gas exports to Ukraine unless it covers its unpaid bills.

But Britain remains cautious about imposing sanctions that could have an impact on the City of London’s reputation as an open global financial centre and on companies, notably BP, which have big investments in Russia.

British officials confirmed BP has warned ministers of possible repercussions if relations with Moscow deteriorate: the company has a 20 per cent stake in Rosneft, the Kremlin-controlled oil company.

Ukraine has 2 months of reserves left. Escalating sanctions will make the situation worse. IMF looting is sure to follow.