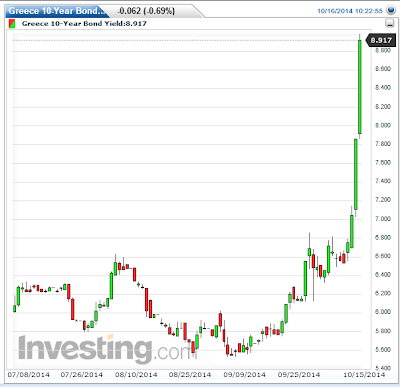 Greek bonds yields had already been climbing with the rise of the radical left Syriza party in recent polls. Icing on the yield-cake was a seriously misguided election ploy by prime minister, Antonis Samaras that blew up in his face.

Greece’s beleaguered prime minister, Antonis Samaras, used a bold gambit last week to win a confidence vote and preserve a coalition government with sagging support: he promised lawmakers that the country would evict its bailout lenders by the end of the year.

Yet Mr Samaras’s plan to make a clean exit from an EU rescue programme and cut short a companion lifeline from the International Monetary Fund appears to be backfiring in dramatic fashion.

Yields on Greece’s long term bonds pushed above 9 per cent on Thursday to their highest level this year as investors doubted that the government had the ability to finance itself without help – let alone press ahead with economic reforms.

Adding to the premier’s woes, Syriza, the radical left opposition party, has increased its lead in opinion polls and threatens to come to power within a few months – an outcome even some members of Mr Samaras’s centre-right New Democracy party now consider probable.

The trigger would be February’s presidential election, where the coalition will have to corral 25 extra votes to secure victory for its candidate. If it cannot, snap elections will be called in March.

The survey, whose results were shown on the Anatropi program late on Monday, also places centrist To Potami in third place.

Other parties gained a combined 4.7 percent, while 18.2 percent of respondents said they have not decided yet.

The poll also suggests that the majority of Greeks do not want the presidential election in February to lead to early national polls. The results showed that 55.7 percent are against early elections, while 40.3 percent are in favor.

Even though Greek voters do not want early elections, polls show that outcome is highly likely unless Antonis Samaras somehow hijacks the election or picks up a huge percentage of the undecided electorate.