The mainstream media mouthpieces for the establishment peddle false narratives, disingenuous storylines, and outright propaganda to keep the ignorant masses confused, oblivious to reality, misinformed, and passively submissive to the opinions of highly paid “experts” and captured fiscal authorities. The existing social order likes things just as they are.

They reap ill-gotten riches, wield unchecked power, and control the minds of the masses. They are the invisible government consciously manipulating the minds, habits and opinions of the multitudes in order to dominate society, control the levers of government, and accumulate obscene levels of wealth through manipulation of the currency and domination of the banking and corporate interests.

One of the false narratives being flogged by the establishment propaganda peddlers is the mass retirement of Baby Boomers causing the plunge in the employment to population rate from 64.4% in 2000 to 59.7% today. They need to peddle this drivel, because the difference between these two rates amounts to 12 million missing jobs. The employment to population ratio is currently at 1984 levels. Any critical thinking person with basic math skills realizes the government reported unemployment rate of 5% is an Orwellian farce.

Over 40% of working age Americans aren’t working, amounting to 102 million people, and the establishment touts the ludicrous lie of a 5% unemployment rate. With only 123 million Americans employed full-time and virtually all the job “growth” since 2009 in non-producing low paying service jobs in the retail, restaurant, hospitality and healthcare industries, wages and household income remain stagnant. The 12 million shortfall in jobs isn’t due to Boomers retiring, as this chart proves beyond a shadow of a doubt. Only an Ivy League educated economist or CNBC talking head could pretend to be confused. 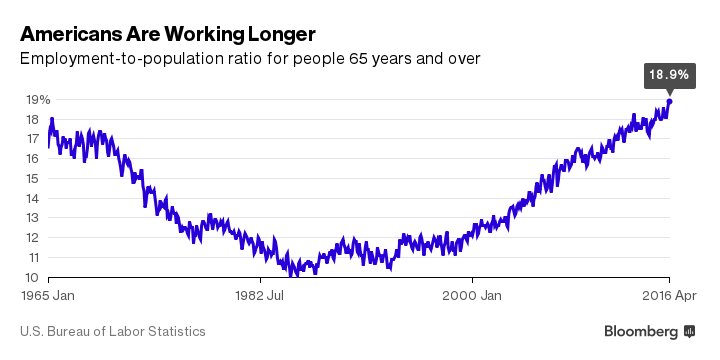 We know for a fact 10,000 Americans have been turning 65 years old every day for the last few years and will for the next fifteen years. When the employment to population ratio peaked in 2000 at 64.4%, the ratio for senior citizens was only 12%. It had remained between 10% and 12% for over two decades. There were 35 million Americans over 65 years old in 2000, and 31 million of the them were not employed. They made up a large portion (44%) of the 70 million people not in the labor force.

Today there are 48 million Americans over 65 years old, and 39 million of them are not employed. The establishment narrative is blown to smithereens by the FACT they now only account for 41% of the 94 million people not in the labor force. There are only 14 million more employed Americans today than in the year 2000, while there are 5 million more employed Americans over the age of 65. They have accounted for 36% of all the jobs created in the last 16 years. The percentage of senior citizens working is at an all-time high of 18.9% and rising.

The narrative of retiring Baby Boomers being the cause for the plunging participation rate is entirely false. The data is not hidden. It’s easily accessible. Any CNBC pundit, Wall Street Journal reporter, or Ivy League MBA Wall Street analyst with even a smattering of math skills could discern the truth. Based on the fact they continue to flog false narratives, makes you believe their job and intent is to obscure the truth, obfuscate the facts, and paint a rosy picture for their establishment bosses. There are almost 4 million less Americans aged 16 to 55 employed today than there were in 2007. Does that happen in an economic recovery?

Since 2007 the working age population has grown by 21 million, while the number of employed Americans is only 4.6 million higher. Those over 55 years old account for 174% of the employment gain since 2007. Does that sound like a mass boomer retirement story? The best part is the government perpetuating the Big Lie by saying the unemployment rate today is essentially the same as in 2007 at around 5%. You just pretend 15.3 able bodied working age Americans left the labor force of their own free will and do not want a job. You then create a narrative of Boomer retirement which is beaten like a dead horse by the captured corporate MSM until the ignorant masses believe it.

There is a reason senior citizens are working until they keel over while greeting the creatures of Wal-Mart. The economy has not recovered for the average working jamoke. The Federal Reserve has crushed the finances of senior citizens since 2000. Their reckless monetary policies created two massive bubbles, destroying the net worth of millions of older Americans. Their “Save a Wall Street Banker” solutions to the worldwide financial crisis they created have gutted the savings of seniors. Seniors now have to decide whether to pay the rent or pay for their heart medicine, thanks to those heroes of the status quo – Ben and Janet.

The relentless inflation in food, rent and healthcare created by the Fed and getting 0% on their savings has left millions of seniors destitute and desperate. They aren’t working because they’re bored. They aren’t lugging bags of cow manure in the garden center at Lowes because they love being close to nature. They are working during their retirement years because they don’t like the taste of Fancy Feast. Despite the happy talk by politicians like Obama about the economic recovery, real people living in the real world are living through a Depression.

The stock market soared during the 1930s. GDP rose during the 1930s. But, they still call it the Great Depression. We have been in the midst of a Greater Depression since 2000. The ruling class uses all their powers of media propaganda persuasion, utilization of highly paid “expert” whores, and a myriad of technological bread and circuses to keep the masses dumbed down, sedated, amused and confused. The percentage of 25 to 54 year olds working today is at an all-time low. The percentage of men working today is at an all-time low. These facts are not reported by the dying legacy MSM.

The numbers and narrative presented by the establishment simply don’t pass the smell test. If the economy had been recovering for the last seven years, millions of good paying jobs had been created and unemployment is really only 5%, then why have retailers been reporting atrocious sales and plunging profits? Why have corporate profits fallen for four straight quarters? Why is every economic indicator flashing red while the BLS says the employment situation has never been better? Challenger, Grey and Christmas surveys the real world and reports:

Employers have announced a total of 250,061 planned job cuts through the first four months of 2016. That is up 24 percent from the 201,796 job cuts tracked during the same period a year ago. It is the highest January-April total since 2009, when the opening four months of the year saw 695,100 job cuts.

Do you believe corrupt government drones or a private enterprise totaling up real layoff notices from real companies? Consumer debt is at all-time highs as people are depending on their credit cards to survive. Obamacare created premium increases are destroying the finances of families and small businesses across America. Home prices are at all-time highs, shutting most people out of the market and creating such high rental demand that rents are also at all-time highs and rising rapidly. Gas prices are up over 30% since February. Food prices are up 10% since the start of the year. At least senior citizens got a 0% increase in their Social Security benefits this year because there is NO INFLATION.

The chart of despair below reflects the relentless decline in the standard of living for the average American household. The wages of the American worker have fallen or remained stagnant for decades, while the government reports an ever expanding GDP. If GDP is dependent upon consumer expenditures to generate 69% of its total, how could it grow as real household incomes decline?

If you guessed enormous amounts of debt, you win the booby prize. The establishment (Wall Street, mega-corps, politicians, corporate media) convinced the masses to impoverish themselves while trying to live an unattainable lifestyle using credit cards, mortgages, auto loans, and student loan debt. Who benefited from the enslavement of the masses in debt? The debt peddlers, mega-corps, paid off politicians, and media maggots. They need a believable narrative to keep their profits flowing. 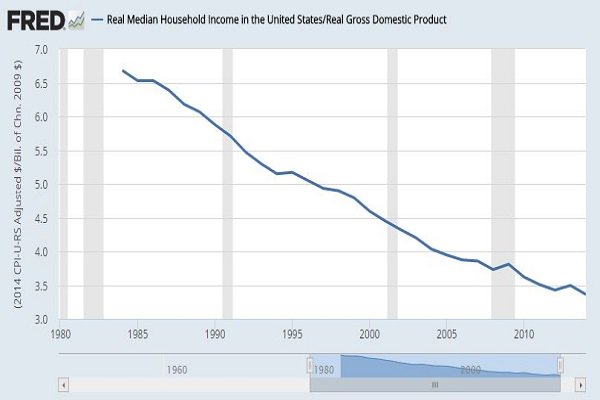 We are living in hard times. The reason tens of millions of Americans are rejecting the establishment and voting for Trump and Sanders is because of economic hardship. Most Americans have been screwed over by the system and are finally getting fed up. They aren’t exactly sure who screwed them, how they were screwed, or how to stop getting screwed, but they are angry. And someone is going to pay.

The status quo is beginning to get nervous. Their usual propaganda, scare tactics and misinformation campaigns don’t seem to be working. Rigging the stock market upward may benefit the .01% temporarily, but the games of financial manipulation have a limit – and we are approaching it. As a society we have relied upon debt, delusion and denial for far too long. We have chosen to be willfully ignorant regarding the truth of our predicament. Entire segments of society live under a blanket of lies and hate anyone revealing the truth. Some have begun to speak the truth and will be hated for doing so. A long hot summer of hate is upon us. And that’s the truth.