Barrack Obama has rekindled 1968. Back then the folly of Vietnam had become so self-evident and omnipresent that the most power-obsessed President in US history was driven from office and his bloody escalation of the war on Vietnam was stopped in its tracks by the overwhelming sentiment of the American people.

Obama has now created another such defining moment in his request for $500 million to arm the Syrian “opposition”. Does this clueless man not know we have already done that? Has this social media savvy gasbag not viewed the ISIS YouTube channels where he could see tens of millions worth of American war equipment on parade under the black flag of these terrorists?

Has the President not noticed that these “enemies” were trained as “friends” in order to fight across the now non-existent border in Syria? Some of them apparently even got their diplomas at the CIA training camp in Jordan. Did they not became battle-hardened trying to overthrow the Alawite government of Bashir Assad—that is, a second cousin to the Shiite sect that is allegedly on our side in Iraq’s sectarian carnage?

And is it not true that the Shiite of Iraq have opposed the US/Saudi sponsored uprising against Assad? Is it also not the case that they constitute Iraq’s majority population, control most of its wealth and oilfields, were put into office under elections sponsored and rigged by the US and now control—-barely—some $25 billion of military training and equipment bequeathed by the American taxpayers?

So the friend of our friend is our enemy? Only in the capital of a collapsing empire could such feckless stupidity be taken seriously.

And it gets worse. Has not the Shiite’s supreme leader, the Ayatollah al-Sistani, told Obama to keep his battle forces off the territory of Iraq? Has not the firebrand Shiite cleric, Muqtada al-Sadr, threatened to once again mobilize his Mahdi army if the American “occupiers” return to the land where we spent $1 trillion destroying the Sunni regime of  Saddam Hussein? So the enemy of our enemy is also our enemy!

There is no hope of stopping the collapse of Iraq and Syria, and thereby the demise of the artificial nations created by the British and French colonial offices in 1916. Since 1990 more than one million citizens of these hapless nations have been killed by military conflict and economic sanctions—-almost all of which is attributable to Washington’s mindless interventionism. Does not the War Party have enough blood on its hands already?

Let the region fight it out and self-partition. The Kurds have already seized the northern oilfields and pipelines and have made their deals with Turkey. So be it.

It is self-evident that southern Iraq is a Shiite satellite of Iran; that its leaders have already made their deals with Tehran; and that the incumbent Bagdad government, which has most of the oil revenues and arms, has engaged the Iranian Quds forces in its defense, not  Obama’s occupiers.  So be it.

And if Syria falls victim to the demise of the Sykes-Picot boundaries—so what? The former so-called “nation” has been a virtual family dictatorship since the CIA was thrown out in 1958. It has more than worn out its historical welcome mat. If the Shiite/Alawites regroup in the Syrian southwest along the Lebanon borders, while the Sunnis reclaim the Euphrates Valley, how does that endanger the citizens of Lincoln NE? It does not.

And don’t give me the horrid shibboleth that the new Sunni “caliphate” that ISIS claims to be creating in the historic Sunni corridor that traverses the two former Sykes-Picot nations will become some “terrorist haven” that must be bombed and droned off the face of the earth. The truth is, there is no end to barren redoubts and geographic hell-holes on this planet where terrorists can take refuge. And, in fact, there are virtually endless hidden places in urban centers all over the world were flat-earth technology and social media can permit the worlds’ few thousand actual jihadists to pitch camp.

Why make more terrorists by unleashing the American war machine in a region that is already scarred and bloodied by decades of futile American intervention and meddling?  Indeed, regardless of the manner in which the Ottoman territories of Mesopotamia gets partitioned, it cannot be worse than inserting America into a cauldron where all of our friends’ friends are enemies; all of our enemies’ enemies are enemies; and any one left is soon likely to be.

The giant mistake in Obama’s futile attempt to defeat ISIS is the same one that caused us to vastly over-prosecute the cold war against the Soviet Union and to launch new wars against repressive regimes like Hussein’s and the Taliban’s during the war on terror.  Namely, a failure to take our own creed of liberty and free markets seriously. The fact, is repressive, totalitarian, fanatical regimes fail under their own weight, and frequently sooner rather than later.

We did not need the Reagan defense build-up to defeat the Soviet Union; state socialism did it for us. The Taliban has survived the force of American arms because villagers don’t like to being bombed and brutalized. Once we are gone, however, the Taliban’s medievalist regime will no more win the hearts and minds of its 43 million diverse tribes and geographies than did the American GIs.

So stop waving the bloody shirt of the ISIS caliphate. The latter will either start making deals with the locals or become consumed in its own civil war. In any event, it will not increase by one wit the exposure of American cities to the risk of random and flukish acts of terrorism that already exist. Unless, of course, Washington persists, like the Roman commander in the opening scene of Gladiator, in trying to remind “these people that they have already been conquered”. 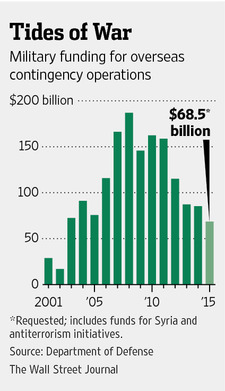 So Obama has put before the Congress the cleanest yes or no choice since the spring of 1968. And perhaps this time the War Party will finally be put out of business.