The Fed has created permanent housing crisis from which there is no escape.

Total US housing starts peaked in 1972. This chart shows actual (not seasonally manipulated) total starts, multifamily starts, and single family starts for each September since then. 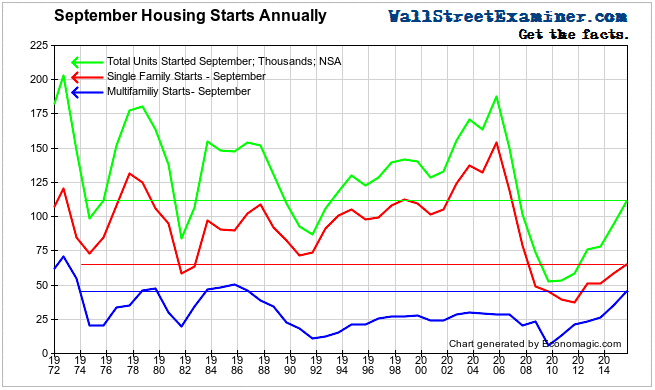 This can only leave us to wonder what would happen if mortgage rates were to actually materially rise. You can bet that the Fed is wondering the same thing.

If rates did start rising, the housing industry might be stimulated a little at first as buyers and multifamily developers who were on the fence jump into the market to beat rising rates. But once that reluctant pool of fence sitters is exhausted, there would be no more buyers. The next step would be collapse.

The Fed’s only option would then seem to be more QE. We know that economies develop a greater and greater tolerance that drug over time. Japan and Europe are perfect cases in point. They are the walking dead. By keeping rates at zero the Fed has left itself, and us, no way out.