By Shawn Langlois at MarketWatch

Poof! Nearly $8 trillion has been sucked from the carcass of the 2016 global equity market so far, and despite the solid pulse in recent days, nobody’s in a celebratory mood just yet. In fact, the gloomers are still holding court in the media. Why wouldn’t they be? Pain sells and double-digit declines are everywhere, with Russia, Italy and China carving deeper into bear territory. 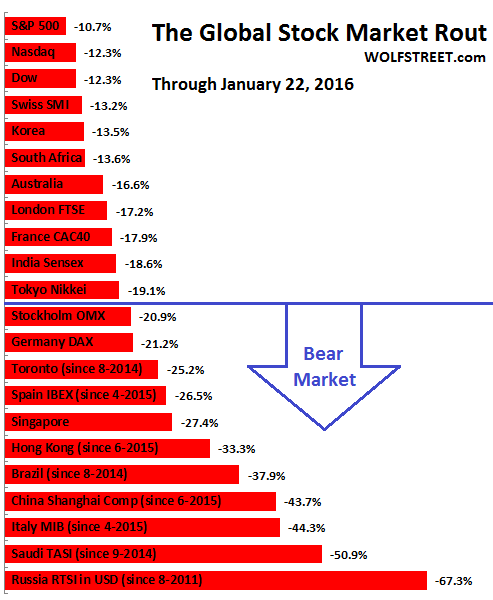 But if Friday was merely a blip in a continued freefall, it was quite a blip. Global stocks exploded for their biggest gain since 2012, according to Bloomberg. The MSCI’s benchmark of world equities rose 2.6% as buyers stepped up and shorts scrambled in the face of potentially more stimulus.

If that 500-point storm midweek didn’t open the selling floodgates, maybe retail investors are a bit more patient than they get credit for. After all, while the headlines screamed blood in the streets, investors bought the dip in what Fidelity said was one of the 10 busiest retail trading days ever.

David Stockman, the tireless bear making noise on the Contra Corner blog, said the “no-man’s land” trend that has gripped markets won’t allow that to be a winning strategy. “Apparently, the day traders and robo-machines think BTFD [buy the f***ing dip] still works,” he wrote. “But they are going to be sorely disappointed — just as they have been for nearly 700 days running.”

And what then? “At some juncture in the not too distant future,” Stockman wrote, “the stock averages are going to break this trading range, and plunge back down to earth.”

The WSJ’s Jason Zweig also wrote about misconceptions in his latest piece, and why there’s no reason to suggest all this volatility necessarily means a bottom is near. “As the behavior of many individual investors has been showing,” he says, “we are a long way from the quiet despair that has so often been a sign that stocks have finally reached bargain prices”……