At the peak of the last financial crisis, as the credit liquidation wave was jumping from one highly levered product to the next, one of the hardest hit sectors was the Collateralized Loan Obligations (CLO) space, where the rout and massive P&L losses across most tranches led to a revulsion for new issuance, which effectively shut down the sector for the next 3 years.

However, as central banks pumped trillions into the market, it ultimately found its way back into the new and improved, or 2.0, CLO market, where the resurgent euphoria led  to a record $124.1 billion in new CLO issuance in 2014, with 2015 tailing modestly with $97.3 billion as the second busiest year for CLO issuance in US history and surpassing the last bubble peak.

The problem is that with much of loan issuance in recent years going to the lately very troubled energy companies, it now appears that the second CLO explosion in 10 years may be on deck.

As Reuters reports, downgrades to energy companies’ credit ratings are weighing on Collateralized Loan Obligations (CLO) funds’ portfolios, in another hit to a market already facing a drop of more than 50% in issuance this year. According to a report issued by S&P, the credit quality of CLO assets is deteriorating, the result of 45 energy borrower downgrades this month as oil prices remain around all-time lows. S&P notes that the credit ratings of around 1.4% of assets held by US CLOs have been downgraded or placed on credit watch with negative implications this year.

To be sure, the S&P report comes well after the market itself has figured out the latent risk in CLOs, as the following performance chart clearly shows:

According to Morgan Stanley, while the pain is spread out across all tranches, it is most acute in the single-B layer. From MS:

Distress in US CLO Market Continued in January 2016. Based on our sample, we estimate that the median total return for US CLO 2.0 (2014-15 vintage) BBs is -9.2%, and for single-Bs is -20.9%. Investment-grade US CLO tranches performed better but still within negative total return territory, except for AAAs. Collectively, US CLOs significantly underperformed relative to comparably rated corporate bonds, leveraged loans and senior tranches of CMBS.

Worse, the sudden repricing means that the negative total returns of US CLO BBs and single-Bs in January have already been more severe than those realized in the entire year of 2015.

It also means that the CLO revulsion is only just starting, and sure enough S&P has finally caught on, with its usual “fashionable delay.”

The implications is that with the CLO product suddenly abandoned, lower issuance of CLOs, the main buyers of leveraged loans, will make it harder for companies to issue new debt in the already-challenged US$870bn US leveraged loan market which provides junk loans to companies including retailer Dollar Tree and countless near-distress shale companies.

A quick prime on the current iteration of the collateralized loan oblitation market: CLOs are typically allowed to hold around 7.5% of loans with ratings of Caa1/CCC+ or lower, according to Deutsche Bank, which makes mass credit downgrades difficult for some managers. About 15% of funds have lower limits of 5%.

When low-rated loans exceed those limits, CLOs get a haircut in overcollateralization (OC) tests, which mean that the loans may have to be marked down to market value rather than par or face value. The test measures the value of funds’ assets compared to its debt and if CLOs fail, interest proceeds are used to repay debt investors. CLOs pool loans of different credit quality and sell slices of the fund of varying seniority, from Triple A to B, to investors such as insurance companies. The equity slice, the most junior and riskiest part of the fund, is paid last after bondholders.

Among the S&P report findings is that 209 US CLOs issued since the credit crisis have an average exposure of 0.69% to one or more of the 45 companies downgraded by S&P. Among these are Fieldwood Energy, held by 140 CLOs, which was downgraded to CCC from B. Templar Energy is held by 72 funds and had its rating cut to CCC- from B-.

“A number of names have been lowered to the CCC bucket, which could affect OC tests if the CCC thresholds are breached,” said Jimmy Kobylinski, an S&P analyst.

It’s just the beginning: as the number of downgrades rises, CLO impairments will propagate in an exponential fashion. Already the number of companies with a low B3 rating and a negative outlook or lower rose to 264 as of February 1, just 27 issuers below an all-time high in April 2009, according to a February 3 note from Moody’s. Oil and gas borrowers make up 28% of the list.

The growing list, formerly known as the “Bottom Rung,” shows deteriorating credit quality and points to a rising default rate in 2016, Moody’s analysts said. The ratings firm is expecting the US speculative-grade default rate to rise to 4.5% in 2016.

Heavy energy exposure is also starting to weigh on CLO ratings, Reuters adds. A tranche of a post-crisis CLO was downgraded last month when S&P cut the Class E notes of Silvermine Capital Management’s ECP 2013-5 to B- from B. Analysts said that the fund had credit deterioration in the collateral portfolio and a large exposure to the energy sector.

It has gotten so bad that Wall Street, which traditionally has no idea what is going on until it is too late (and then rushes to blame the rating agencies) has started asking questions: “People are definitely trying to get their heads around what [increased CCC holdings] says about the credit cycle,” said Chris Flanagan, head of US mortgage and structured finance research at Bank of America Merrill Lynch in New York. “The market has changed dramatically in just six weeks.”

To help the market appreciate the severity of the above, according to a recent update from Morgan Stanley, 2015 was the first post-crisis year in which distress in the CLO market surged. During this year, CLO equity turned from a well-sought, 10%+ return asset class into a space red-flagged with cautions and concerns. While cash distributions managed to remain at ~20% annualized, NAV collapsed across all vintages with the pain most pronounced in 2013-14 deals, the median NAVs of which currently stand at near-zero levels.

The punchline is that this trend not only continued but accelerated dramatically in January 2016 – median CLO 2.0 equity NAVs tumbled by 9 percentage points, or by 85%, and according to Morgan Stanley calculations as of January 2016, a whopping 348 US CLO 2.0 deals’ equity tranches currently having NAV below zero. 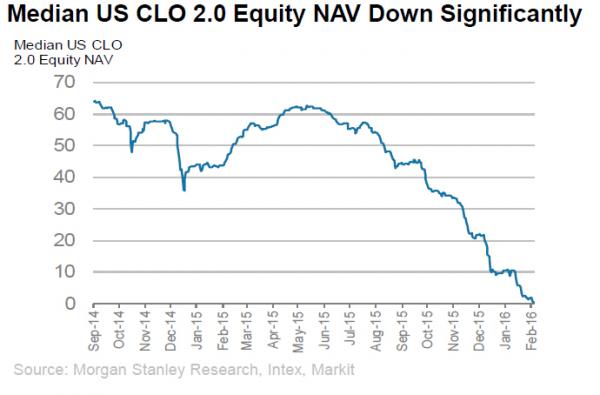 And, as Morgan Stanley concludes, it is about to get much worse:

The research approach we are taking towards CLO equity has shifted from one that evaluates growth and upside to one that looks into distress and potential losses. While we do not expect this theme to change in 2016, we reiterate our view that the levels of distress in the US market may create “option-like” payoffs in CLO equity in the secondary market, especially in deals by managers who are better “credit pickers”.

In short, the next shoe in the credit market has just dropped.