The middle class started disappearing in earnest in the late 1970s.  Massive inflation started eating away at the standard of living for most Americans.  Yet much of this was covered up by access to debt.  Credit cards, creative mortgages, student loans, and auto debt all allowed Americans to continue acting as if prosperity was only an American Express card away.  Credit card debt outstanding is now back up to $900 billion, a number last seen during the Great Recession before the great deleveraging.  Americans have used debt as a means to cover up the reality that the middle class is disappearing.  Credit cards are probably the clearest example of spending money you don’t have.  Credit cards allow you to literally spend future earned money today.  We always hear that many pay their balance off each month.  Well the data shows something else.  There is $900 billion in credit card debt floating out in the system.

The growth of credit card debt

Our entire system is built on easy money.  Debt is the spending elixir for many households.  Unfortunately as wages have gone stagnant people have found it necessary to be reliant on debt to purchase the artifacts of middle class living.

Here is a sobering thought; household income is up 300% since 1980 while credit card debt is up 1,760%.  As the middle class standard of living has fallen, people simply cannot give up on this path and have borrowed their way up: 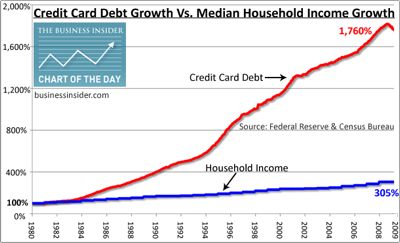 And Americans have gotten more comfortable going into debt for a variety of things.  Credit card debt used to be the number one non-housing related debt class in the country.  That award now goes to student debt reaching $1.36 trillion.  But as the recession looks further in our past, Americans are quickly going back into credit card debt:

Here is a sobering chart: 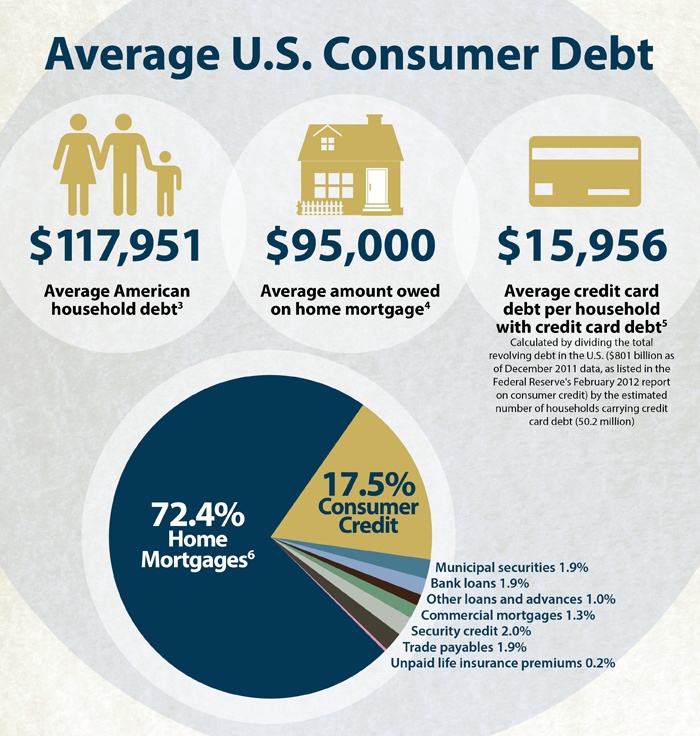 Debt, debt, and more debt.  But with credit cards, you are borrowing money you don’t have for consumption today.  With a mortgage, you have it secured to a home.  With auto loans, you at least have the car.  Student loans prove to be more problematic because there is no bankruptcy clause and the amount people are taking out in student debt is staggering.  Credit card debt with high rates in this low interest rate environment are just poor financial decisions by Americans.  You are locking in high rates in an environment where high rates are hard to find.  And for what?  To buy things people clearly can’t afford.  Trying to hold on to the memories of middle class living.

It looks like people in the US are once again going into deep debt to purchase things they can’t afford.  I mean last time things ended well so why shouldn’t it this time?