Automakers reported auto and light truck sales for May this week. Here’s the perspective that Bloomberg gave on it as sales came in at the seasonally adjusted annual rate of 17.71 million, which was a big jump from the April number.

Here’s a perspective that nobody shows you. It’s the May, year to year annual sales rate per thousand of US population, not seasonally adjusted. Yes, the trend has been up since the bottom in 2009. In fact, it’s almost back to the level of the bottom of the 2002 recession! 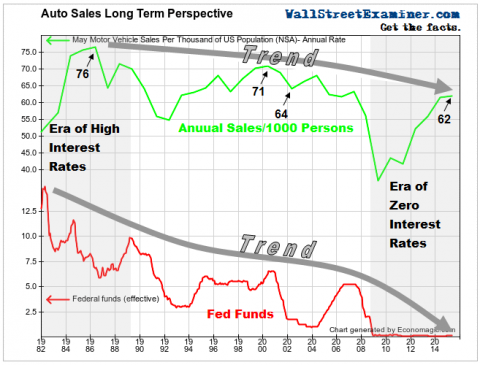 Obviously ZIRP and subprime auto lending have correlated with sharply rising sales. But sales were so depressed between 2008 and 2012 that a bungee rebound was inevitable. Cars wear out. People decide at some point that they’ve waited long enough. That’s what this rebound has been about.

So has ZIRP been responsible for the surge in sales over the past 6 years, or has it simply been the natural rebound that occurs after 4 years of sales at depression rates between 2008 and 2012. I’ll guess the latter, but the Fed and its cheerleaders on Wall Street are sure to give credit to ZIRP.

If that were true, why the radical slowing in the rate of sales over the past year? The answer again lies in the natural economic cycle of boom, retrenchment, rebound, and retrenchment. Most people who needed, wanted, and could afford a new car have bought one in the past couple of years. ZIRP or not, sales are slowing down and are likely to turn negative over the next few years as people naturally retrench.

ZIRP may contribute to distorting the cycle, but it can’t abolish it, regardless of what the Fed thinks.