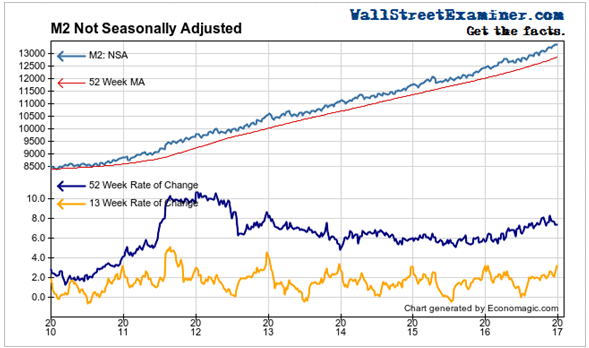 US M2 money supply continues to grow at a rate than 4 times faster than the recent growth of US GDP. The first multiplier supports the US economy. The 3x excess drives asset inflation. That’s where monetary inflation shows up under the Fed’s cockamamie schemes.

Money supply moderated only slightly in December. The annual growth rate held near 7.5%. That was a dip from 8%+ in the third quarter. The growth rate is still in an uptrend.

Money supply tends to expand rapidly in the early stage of recovery when the Fed eases aggressively. In the later years of an expansion the Fed usually gradually tightens and the growth rate of money slows.

That’s what happened in this “recovery.” Money supply grew extremely rapidly in 2011-2013, then moderated.

But since the second half of 2015 money supply growth has been slowly accelerating again. This suggests bubble dynamics are at work. Speculative behavior has been raging. Speculative lending grew rapidly. Much of this was driven by corporate CEOs. They had their companies borrow the cash to purchase their own executive pay option grants. This is unhealthy and will lead to a massive adjustment, most likely beginning within 6-12 months if the past pattern is any guide. But what happens in the meantime could be real “interesting.”

In the current monetary environment of massive excess reserves the Fed is supposedly raising interest rates by increasing interest on excess reserves (IOER) which the banks hold at the Fed. Keep in mind that the banks got that cash in the first place because the Fed handed it over to them. It did so when it bought Treasury bonds and MBS from them.

The Fed is now telling them, “Here’s this risk free cash we handed over to you. Now we are going to pay you a bigger subsidy on it. This will lower your overall cost of funds, and increase your profits.”

“And oh by the way, please raise interest rates.”

Who are they kidding? They expect this to tighten monetary growth?

It gets worse. The big European and Japanese banks are also Fed Primary Dealers with NY bank branches. In fact, many of the world’s big banks have branches in the US and are members of the Federal Reserve System.

Here’s why that matters.

The Fed has this Reverse Repo (RRP) program where it pays interest on funds the banks “lend” to the Fed overnight (yes, it’s stupid). As the Fed raises the subsidy it pays on IOER it also increases the rate it pays on RRP. That program is going to start looking mighty attractive to those foreign banks too. Watch the cascade of cash from Europe and Japan into the US banking system only increase.

If I’m right about this, we’ll see the evidence in M2. Instead of slowing monetary growth, I think that the Fed’s increase in IOER and RRP rates will stimulate money growth. M2 growth will remain strong and may even accelerate.

Under the circumstances money supply growth might even accelerate. If that happens, watch the Fed start running around trying to catch its tail. It would be funny if it were not so sad.

To me, the Fed’s action in raising its payout to the banks is effectively the opposite of a tightening. It feeds them more cash, not less. And it will draw even more overseas cash into the US. I don’t particularly like the QE/drug analogy for the US economy, but yeah, this is like giving morphine to a junkie. He may sit up and look good and act normal for awhile. But then what? The Fed is not only giving morphine to a junkie here, it is giving it to them for free.

At the very least, I wholeheartedly endorse the old time monetary policy religion. That is that the only way to tighten is to shrink the level of reserves in the banking system. And the only way for the Fed to do that today with all these excess reserves floating around, is to sell assets to extinguish excess reserves.

That would raise interest rates for real. It would work at the long end first. As the Fed sells bonds, the supply it adds to the market would depress prices (raise yields). Then as the excess reserves were removed and bank reserves finally started to tighten, short term interest rates would start a real increase. Not an imaginary increase like the increased IOER/RRP but in a real and normal way. Bank costs of finds would rise, and the banks would charge more to lend, and would pay more for deposits.

Ironically, we are seeing money market rates rising. But it’s not because of the increase in IOER, it’s because of the Fed’s jawflapping. This has reignited the crisis in Europe because every one thinks the Fed is tightening.

Rates started rising here in Europe well before the Fed took any action. European banks are under massive stress. Those that have access to the US market are borrowing more there. Those who can’t borrow are liquidating their short term US Treasury bill holdings. That drives rates for that paper higher. There’s less demand for it as holders elect to cash out rather than roll the paper over, and former holders of the paper are adding to the supply.

Put this all together and it looks to me like a perfect storm of things going wrong.

The Fed began publishing its numbers on its own balance sheet, its open market operations, and on the US banking system on the web about 15-20 years ago. I have been observing those numbers weekly since 2002. From that perspective, in my opinion the Fed has absolutely lost control of this monster.

They have never fully understood the impact of their decisions. The monster they created has now awakened. It is ready to inflict upon us all the negative unintended consequences the Fed has loaded him with. Call him FEDKENSTEIN. He has the power to destroy.

All this craziness has to make you bearish over the longer term. We are headed for a truly massive adjustment. But here’s what really worries me. If even more foreign capital starts to flow into the US we could first be staring at one of the most insane financial market blowoffs in history. The danger that poses would be unimaginable.

If it happens, we will roll with it. We’ll extract what profits we can where we see opportunities (gold may be one). Then hopefully we’ll be able to see the evidence of change plenty early enough to step aside and go the other way when it’s time.

Obviously, I could be wrong about all this. I am not an economist.