The NAR reported that “Existing Home Sales” (EHS) fell 3.7% in January. Well, it wasn’t really 3.7%. That was just a made up number using the statistical hocus pocus of seasonal adjustment (SA) to purportedly represent the trend. On an annual SA basis, sales were reportedly up 5.4%.

The NAR also reports the actual not seasonally adjusted data (NSA). The media doesn’t bother to report that. We do. We make a graph of the actual data. That enables us to see the actual trend. That’s particularly important when a major trend is reversing. The NSA data will tell us as it’s happening. The smoothed, SA data will normally be a month or two behind the curve. We’ll get to the actual data in a minute.

Not only is the reporting of the EHS report not actual data, it’s not “Existing Home Sales.” It’s the number of previous home sales that went to closing in that month. Closings are a formality. In the real estate business everybody considers a property sold when it goes under contract. The buyer thinks that way. So does the seller, and so does the agent. A SOLD sign goes up when the contract is signed by the seller. The property comes “off the market.”

The NAR’s “Pending Home Sales” (PHS) is the actual measure of sales in a month. Two months later, normally around 95% of those sales show up as closings in the “Existing Home Sales” report.  The best way to see the sales trend as close to real time as possible is to track “Pending Home Sales,” which we also do. That report for February contracts will be out next week. Those will give us a pretty good idea of what April closed sales will be.

“Existing Home Sales” isn’t completely useless however. The ratio of the sales that close in a given month to the sales contracts from 2 months prior is a good measure of market conditions. When that ratio goes well above the usual level, it suggests a frothy, speculative market. It means that lenders are stretching underwriting standards to approve buyers that would not have been approved under normal circumstances. We’ll take a look at that below.

Yes, supply is at record lows. So prices are high and rising. That’s why volume is weak. Demand is shriveling as prices inflate far faster than household incomes.

But the Journal’s pro Realtor.com narrative says nothing whatsoever about the possibility that the real explanation for the drop in sales is weaker demand. That’s fair and balanced reporting from the sister company of Realtor.com. It was probably written by the PR guys at another News Corp. subsidiary, News America Marketing, whose slogan is “Your marketing objectives are our business.”

Here’s what we know about the actual data. Sales that went to closing (EHS) totaled 315,000 units in February. That was a drop of 4,000 units, or -1.25%.  That may  sound better than the SA fictional change, but it’s really atrocious. It is far worse than the usual change between January and February. February 2016 saw an increase of 12,000 units. The average February change for the 2006-2016 period was an increase of 12,000 units. In fact, over the last 10 years, including the during the housing crash, February sales never declined. Last month was bad–really bad.

On a year to year basis, February closings rose by 1,000 units. That will get revised away next month so that the year to year change could be slightly more than that or it could be negative. The current reading is a gain of 0.3%. That’s a far cry from the 5.4% reported by the NAR.  I also compared the total of the last 3 months with the same period of 2015-2016. Those 3 months this year were up 2.1% versus last year. Again, that’s not 5.4%.  The biggest part of the gain was loaded in January. The December year to year gain was just 0.3%.  Clearly, growth is all but dead in the water.

And it will get worse.

The 315,000 sales that went to closing (EHS) in February compared with 307,000 contracts in December.  That means that an unusually high number of sales from other months were moved to closing in February.  Do I note a whiff of panic in the air? Bankers and buyers are pushing and stretching to get sales closed before rates and prices rise again. The ratio of closings to contracts keeps rising as banks loosen their underwriting standards to get as many deals as possible done before the jig is up. 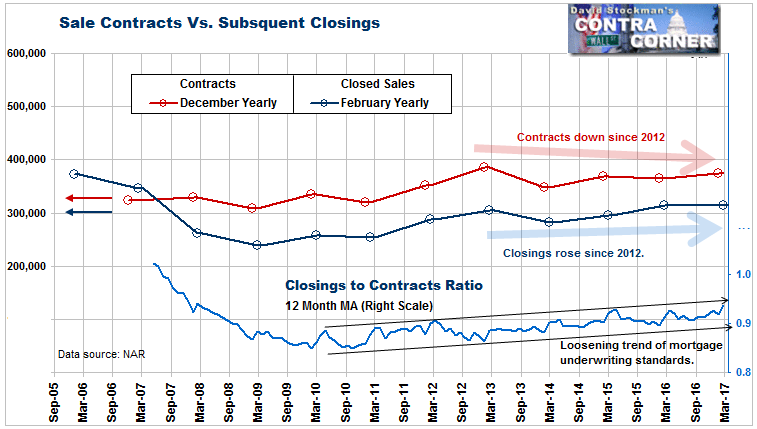 I warned in my report on December sales contracts (PHS) that extremely weak December contracts would lead to a “bloodbath” in February closings. The drop in EHS of 1.5% from January bears that out considering that February sales have never fallen in any of the past 10 years, including during the housing crash. This month’s EHS was clearly a very bad sign. Year to year growth has virtually stalled. These are bad omens for when the time comes that mortgage rates resume their rise.

Even if mortgage rates hold at this level, price inflation continues to be a big problem. The year to year inflation rate rose to 7.7% from 7.2% in February. The NAR uses closed contract prices collected from regional MLSs for the most recent month in these calculations. This is near realtime data. Case Shiller data lags the current market by about 5 1/2 months when released, and it uses price suppression methodology in several of its measures. Case Shiller lags the NAR data badly. The NAR price data is a better indicator of the overheated bubble conditions of the current market. 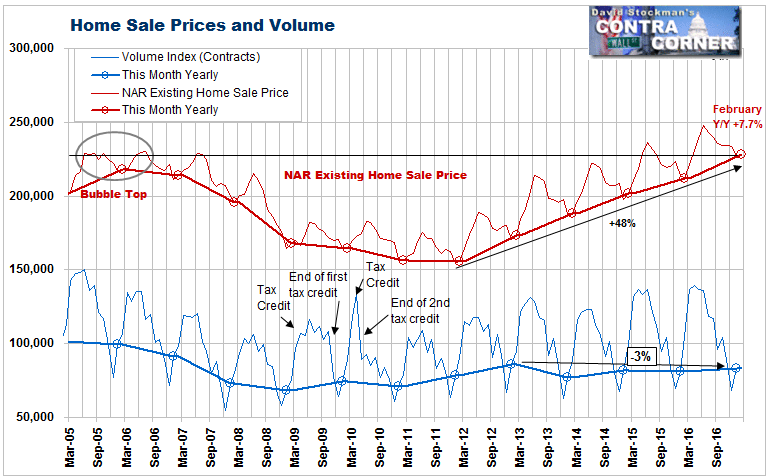