The headline, fictional, seasonally adjusted (SA) number of initial unemployment claims for last week came in at 267,000. The Wall Street economist crowd consensus guess close to the mark this week, at 272,000.

We focus on the trend of the actual data Instead of the seasonally manipulated headline number expectations game. Facts tend to be more useful than the economic establishment’s favored fictitious numbers. Actual claims based on state by state filings were 230,430, which is another record low for this calendar week. It continues a nearly uninterrupted string of record lows that began in September 2013.

You can see for yourself from the chart just how extraordinarily low these numbers are.

When using actual data we want to see if there’s any evidence of trend change. Thus we look at how the current week compares with this week in prior years, and whether there’s any sign of change. The actual change for the current week was a decrease of -32,500 (rounded). This week of July always has a large drop. Based on the data for this week from the last 10 years, the current decline was not very good, stronger than only last year (-29,500), and the same week in 2008 (also -29,500). In 2008 the economy was collapsing. The 10 year average decline for this week was -70,000.

Is this weakness material? Week to week changes are noisy. The trend is what is important and it remains on track. Actual claims were 10.6% lower than the same week a year ago. Since 2010 the annual change rate has mostly fluctuated between -5% and -15%. This week’s data was right in the middle of that range. There’s no sign yet of a significant uptick in the trend of firings and layoffs.

Population has been growing and the size of the workforce has as well, although not as fast as population. To get a better idea of how the claims data is performing over time, I normalize it based on the size of monthly nonfarm payrolls. Here’s where we can see just how extraordinary the current levels are. There were 1,613 claims per million of nonfarm payroll employees in the current week. This was a record low for that week of July, well below the 2007 previous record of 1,889. The 2007 extreme occurred just before the carnage of mass layoffs that was to begin a couple of months later. Employers were still clueless that the end of the housing bubble would have devastating effects. If they were clueless then, they are in an advanced state of delirium and delusion now.

However, it is absolutely normal for employers to completely miss the signs of impending doom.

Last week the media noted the fact that claims were lower than the record low of 1973. What they failed to mention was that that low came well after the Dow reached an all time high in January of that year. The devastating 1973-74 bear market, which cut the value of stocks by 50%, was in its early stages. This was an early example of employers being late to the funeral. 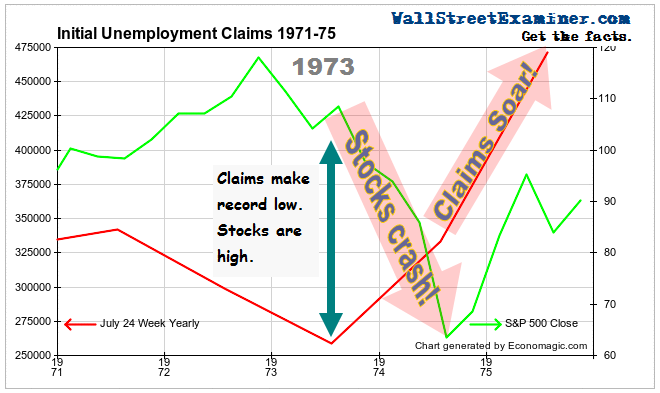 Similar employer hoarding of workers has been associated with bubbles in the more recent past and has led to massive retrenchment, usually within 18 months or so. In the housing bubble, employer hoarding behavior continued well beyond the peak of that bubble in 2005-06.

It’s worth noting that there was an institutional stock market bubble in 1972-73. It was the Nifty Fifty bubble, where the biggest best known stocks kept soaring while everything else in the market went nowhere. A bubble does not require mass public participation. Institutional bubbles are just as insidious, even more so.

The current string of record lows in claims is now 5 months beyond the point at which other major bubbles have begun to deflate. Based on the fact that previous records were attained at and for some time after the peaks of massive bubbles, by that standard, the current financial engineering, central bank bubble finance bubble, which is very much a big money, institutional bubble, may be the bubble to end all bubbles!

As a result of the fact that employers apparently tend to take their cues from stock prices, we cannot depend on the next downturn in the claims data to give us advance warning of a decline in stock prices, although there should at least be concurrent confirmation. However, history shows that the fact that claims are at record lows is warning enough!

I look at an analysis of individual state claims as a kind of advance decline line for confirmation of the trend in the total numbers. The impact of the oil price collapse started to show up in state claims data in the November-January period. While most states show the level of initial claims well below the levels of a year ago, in the oil producing states of Texas, North Dakota, Louisiana, and Oklahoma, since the beginning of 2015 claims have been consistently above year ago levels. North Dakota and Louisiana claims first increased above the year ago level in November of last year. Texas reversed in late January. Oklahoma joined the wake shortly after that.

Click here to view table if viewing in email

Claims increased year to year in North Dakota, Oklahoma, and Texas. The drop in Louisiana this week is suspicious. It may be a reporting issue. That state has consistently shown higher year to year claims. The numbers have varied widely week to week but the trend of claims being significantly higher than the same week last year has been persistent. Texas, with a huge and more diversified economy improved in the second quarter as the price of oil rebounded and stabilized, but that improvement was temporary and new claims in Texas have been climbing in July.

In the July 25 week, in total only 7 states had more claims than in the same week in 2014. That was down from 11, last week. This number fluctuates widely week to week with many states near even. At the end of the third quarter of 2014 just 5 states showed an increase in claims year to year. At the end of 2014 that had increased to 8. In early April this year the number had risen to 22. The number this week is the lowest it has been all year. This is yet another example of the extreme which employer hoarding of workers has reached.

The 22 states that were higher in early April gives us a benchmark to watch, similar to an advance decline line in the stock market. If the number of states showing a year to year increase in claims should exceed 22, it should be an indication that the national trend of decreasing claims has reversed.

I track the daily real time Federal Withholding Tax data in the Wall Street Examiner Pro- Federal Cash Flows report. The year to year growth rate in withholding taxes in real time is now running +3.5% in nominal terms. That’s equivalent to around +1.5% to 2% adjusted for wage inflation. The growth rate has dropped sharply in July after being remarkably consistent around +5-6% in the second quarter.

Withholding tax collections tend to rise and fall in a cycle lasting three to four months. It’s too soon to tell if the July drop is the beginning of weakening in the slow growing top line of the “Tale of Two Economies,” US economy, or just part of the normal cyclical swing pattern in this data. The behavior of the data over the next several weeks will tell.

The following is reposted from prior reports for the benefit of new visitors.

The July 12 week was the reference week for the July payrolls survey. The numbers for that week were weaker than the June numbers, suggesting that Wall Street economists are likely to find their estimates for July are too high. Whether the cockamamie seasonally adjusted headline number reflects that reality or not is a crapshoot. It takes the BLS 7 revisions of the SA data over 5 years to fit it to the actual trend. The first release is hit or miss. But even if the number comes in below expectations, it probably will not influence the Fed, which remains hellbent on trying to get rates up sooner rather than later.

The Fed’s favored measure of inflation, PCE, suppresses the measurement of inflation even more than the just released CPI. If the Fed believed this data, it would be even further behind the curve in recognizing that inflation is running much hotter than the official measures show than it is. The Fed knows that, and has inserted weasel words into its various propaganda releases that it will raise rates as long as the Fed thinks that inflation is moving toward the 2% target. It does not actually need to be at the target. The Fed is prepared to ignore the official measures because the members realize that they’re bogus.

The Fed will use or ignore whatever stats it wants depending on whether they fit its preconceived narrative, which is “We’re gonna try to raise rates at least once this year, and if that doesn’t work, we’ll think of an excuse not to do it again, because raising rates is really data dependant depending on which data dependably supports our narrative, and which data we will ignore, because it all depends on dependably dependant official data, none of which is dependable.”

The actual claims data, and actual withholding data, show the financial engineering bubble economy is still at full boil. This will continue to encourage the Fed to engage in the charade of pretending to raise interest rates sooner rather than later, but only because they have conditioned the market to expect it, a conditioning that they now regret they had undertaken. They’re walking back expectations now because they know they will have problems getting rates to go up. I cover that subject in depth in the weekly Money-Liquidity Pro reports.