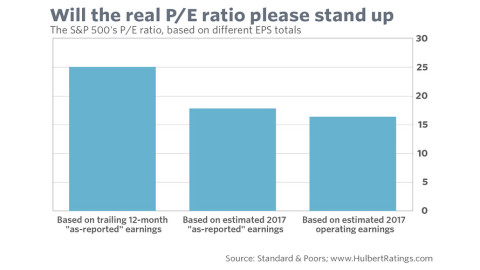 The U.S. stock market’s P/E ratio is telling us in no uncertain terms that stocks are hugely overvalued. Given that, I would have thought the bulls would simply ignore it.

In fact, many of the bulls have figured out how to torture the data in order to make it appear as though the stock market’s current valuation is in line with historical averages. It’s crucial that you understand what they’re doing so you don’t get seduced by their sweet-talking rationales.

The reason the P/E can seem to tell more than one story is that there is more than one way of calculating it. Though the “P” in the ratio — the price — is fixed, the “E” can vary by a lot. Some analysts focus on trailing 12-month earnings, for example, while others focus on estimated earnings over the coming year. Some calculate the P/E based on earnings as they are actually reported by the companies, while others rely on so-called “operating earnings” (which reflect a firm’s profits after excluding non-operating expenses such as taxes and interest).

The chart above shows the impact of these different earnings numbers. Based on trailing 12-month as-reported earnings, for example, the S&P 500’s SPX, +0.42%   P/E ratio currently stands at 25.1. In contrast, the P/E is just 16.4 if you focus on S&P’s estimate of 2017 operating earnings.

To put these numbers in historical context, consider that the S&P 500’s average P/E ratio over the past 140 years stands at 15.6 (according to data from Yale University professor Robert Shiller).

No wonder the P/E can be presented in so many ways. The bears, focusing on the 25.1 ratio, argue that the stock market’s current valuation is more than 60% above the 140-year average. The bulls, focusing instead on the 16.4 P/E, assert that the market’s valuation is just 5% above average.

Only one of these comparisons — the bears’ — is legitimate, however. The bulls’ calculation involves a subtle, but pernicious, sleight of hand. That’s because the P/E ratios derived from Shiller’s data are based on trailing 12-month as-reported earnings. Given that forward-looking P/Es are almost always significantly lower than trailing P/E’s, the bulls are not comparing apples to apples against a P/E based on forward-looking estimates.

Barron’s editor Jack Hough discusses the current issue of the magazine, including why top Wall Street strategists are feeling cautious about the year ahead, and the impact of technology on the job market. Plus, why men are shopping more at outlets.

We owe this insight to a study conducted several years ago by Cliff Asness, co-founder of AQR Capital Management, and Anne Casscells, a managing director of Aetos Capital. The two researchers estimated what P/E ratios would have been since 1871 if, at each point along the way, they were calculated based on forward estimates. The median of those forward-looking P/Es was close to 11.

That puts the bulls’ favored P/E ratio of 16.4 in an entirely new light. When compared in an apples-to-apples way to historical norms, the stock market is 50% overvalued. That’s relatively similar to the message of the 25.1 P/E ratio when calculated on trailing earnings.

Note carefully that it’s an entirely separate question whether or not today’s low interest rates justify higher-than-normal P/E ratios. That’s another argument that many bulls use for not worrying about today’s high P/E ratios. I have my doubts about this argument, as I’ve written elsewhere. But even if you do believe that low rates translate to higher P/E ratios, you still would need to conduct your analysis by comparing today’s P/E to past ratios calculated with the same definition to earnings.

To be sure, it’s worth remembering that valuations exert only a weak gravitational pull over the stock market’s near-term direction. So there is no reason that the high P/E immediately dooms the market. But you may want to pick a new adviser if he tries to argue that the stock market’s current P/E ratio is at or close to the historical average.

Source: Here’s the No. 1 lie the bulls tell about the U.S. market