I don’t have much use for consumer sentiment measures in the conventional sense that most market observers view them. They don’t seem to have any predictive value. They aren’t good predictors of retail sales or the stock market. They seem to merely follow stock market trends, or in the case of 2000-2005, the housing bubble trend. But usually they tend to move up and down on the heals of the most recent month’s change in the Dow. So if we’re following the Dow or the S&P, what’s the point of giving any weight to sentiment indexes? If sentiment doesn’t lead the economy and the economy doesn’t lead the stock market, then really, what’s the point.

Worse, indexes like the University of Michigan’s Consumer Sentiment measure compound their uselessness.  They usually combine two measures, one more useless than the other, as if putting two bad measures together equals one good measure. One of them does tend to correlate better to actual conditions. That one is called the Current Conditions index. Consumers do tend to have a decent handle on how they’re faring economically right now, even if they have one eye on the stock market for cues.

The other component of the Michigan Sentiment Index is the Expectations Index. The problem with measuring expectations is that consumers have no idea what the future holds. They’re not as bad as economists in that respect, but they really have no clue. The University of Michigan is not alone in measuring an expectations component. The Conference Board does it too. So does Bloomberg with its less widely followed Consumer “Comfort” measure. Since all of them question consumers, aka “people” about current conditions, why they cloud the issue by asking survey respondents what they think of the future?

Even more humorous is that the U of M would release its index twice each month, with a preliminary estimate early in the month and a final estimate late. It’s as if one would be more accurate than the other in predicting… something. It’s typical economist nonsense, which they interpret as if the data mean something, just so that they can arrive at the wrong conclusion.

Fortunately, data is available for each component. I have found the current conditions indicators useful to some degree. That usefulness is as a very long term contrarian indicator for whatever bubble is dominant at the time, whether a stock market bubble or a housing bubble. People do tend to follow those trends, and they think that if their stocks are going up, or other people’s stocks are going up, and their house is going up in value, then by gosh, by golly, I’m rich! Times are good!

The thing is that when they reach a certain level of giddiness historically, that has tended to be the precursor a bubble top. That’s followed in a year or two by a violent downturn. A year or two is a long time, but it’s nice to have an alert that maybe it’s time to strategize an escape route before it’s too late. 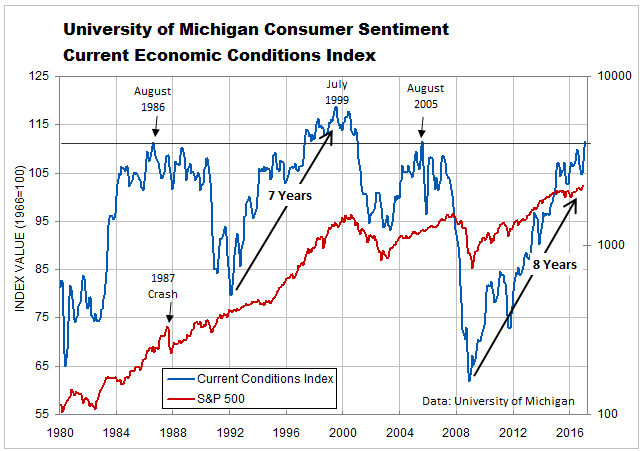 The Current Conditions Index today has reached the level of 111. It has done so three other times in the past. Once was very briefly in 1986. That was a 25 year record at that time. One year later the stock market peaked. It crashed in 1987.  It’s hard to tell from this chart, but that crash lopped off 30% of stock market value in a couple of months. But yes, the times they were a changing, and confidence stayed high while the stock market recovered.

The Index next went over the 111 level in 1997.  However, that time it kept going, not peaking until 1999.  It took 7 years to go from low to high.  The peak in the indicator at that time led the high of the technology bubble by about 9 months, although the broader markets hung around the highs for another 5 months. The next 2 1/2 years were rough for investors. 1999 was a good time to get out and go to the sidelines.

The next time the Index reached 111 was in August 2005. That happened to coincide almost exactly with the volume peak in the housing bubble. Within a few months, volume dried up. Prices kept rising for another year however. But when people saw the sale signs starting to pile up in their neighborhoods, they began to worry. Sentiment became a little unstable and then made lower highs in April 2006 and February 2007. The first lower peak coincided roughly with the price peak in the housing bubble.

The next peak marked the beginning of the crash. Stock prices made a final high a couple of months later. Stock investors are always the last to get the news. Unless you count employers. They usually take  their cues from the stock market, so they’re often even later in making adjustments. That’s just one reason why I give little weight to employment data when analyzing stock price levels. But I digress.

So here we are again in 2017 and the Current Conditions Index is back to the rarified air of the 111 level after rising for 8 years. That’s the longest sustained rise in history, virtually all of which occurred during the hated, much maligned Obama Administration. Now that everything is once again right with the world with Republicans in control of both the Congress and the White House, and soon the Supreme Court as well, sentiment reflects that. I guess sentiment would go to 200 now, if that were possible.

Or maybe not. Maybe this is again one of those times where it’s as good as it gets. The euphoria surrounding the clown now in the White House and the clowns in Congress, seems somehow, slightly off. Maybe like the last few times, sentiment has reached this rarified air, the market can continue higher for a year or two.

Unlike the last couple of big upswings, the market has had the tailwind of massive central bank rigging pushing prices higher. It’s not that they weren’t “helpful” in the past. it’s just that this time, the level of intervention has been far more open and aggressive.

Note on the logarithmic scale of the graph of the S&P 500 how labored the bull market has been even with that intervention. The enormous swing in consumer confidence seems out of whack in comparison.

There’s just something wrong with this picture. Maybe investors and consumers think that the market can launch again like it did in 1995 when Bill Clinton was cutting deficits and taking Treasury supply off the market. Less Treasury supply meant less competition for stocks, so they zoomed higher from 1996 to 2000.

But unlike that period, Donald Trump’s proposals would be budget busters. If passed, they will send the deficit soaring and will dump immense amounts of new debt on the market to compete with stocks.  Today, with foreigners backing away from buying US debt, even a slight increase in new Treasury supply is likely to harm the stock market. Low yielding stocks will have trouble competing with rising yields in Treasuries.

So I’m not willing to bet here that this apparent confidence extreme will give us the same luxury of a 1 or 2 year lead time as it has in the past. Sure, maybe we can hang on and wring another couple of percent out of this bubble. But maybe not. At the very least, on the first sign that this sentiment uptrend has broken, I’d want to be out. Completely. Now might not be a bad time to start.