Here’s What They Didn’t Tell You About Car Sales

While the Wall Street, press release repeating, mainstream media “journalist” apparatchiks were ballyhooing the strong auto and light truck sales in July, what they didn’t tell you is this. Sales are down 25% from the 2005 peak on the basis of sales per capita. Cars and light trucks sold at an annualized rate of 56 per thousand of US population in July. That compares with 75 per thousand in July 2005. 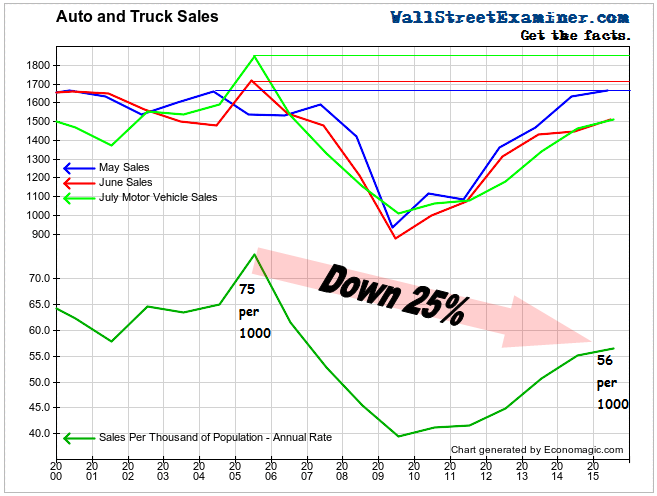 You might eruditely note that July 2005 was at the peak of the housing bubble cash out equity refi boom and you would be right. But the current auto sales market has had the benefit of a stock market bubble, where it’s far easier to get cash out to buy a car than by refinancing your house. Why has it done so poorly in comparison. The current sales rate of 56 per thousand is even less than the sales rate in the pits of the 2001-02 recession, when the sales rate fell to 58 per thousand. This market has risen to 56 per thousand. And it took 5 1/2 years to get there. 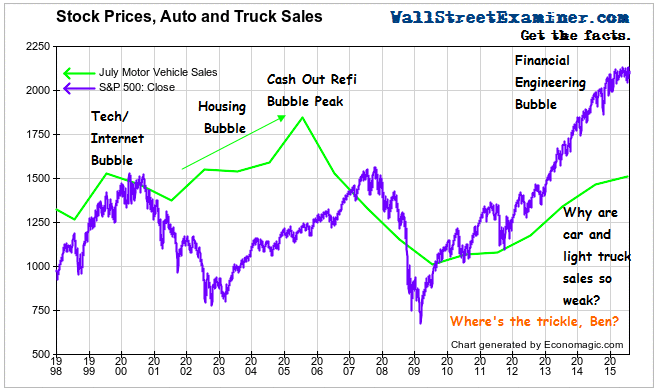 So I’m wondering what all the cheering is about. Here again is more evidence that the US middle class standard of living is eroding. Fewer and fewer middle income earning households can afford the usual accoutrements of a middle class lifestyle. Ben Bernanke said in November 2010 that ZIRP and QE would cause stock prices to rise, and that, not in so many words, that wealth would boost confidence, trickle down to the masses, and the economy would grow, grow, grow! What happened.

This illuminates the problem that trickle down doesn’t work. The trickle pools at the top. It gets hoarded by the financial class who use it to speculate and buy back stock, rather than invest in their businesses and their workforce. So the middle class erodes.

The problem is that the upper income strata alone can’t support a growing economy indefinitely. While motor vehicle sales are still growing, the pace of growth has slowed dramatically over the past 3 years. The annual growth rate of sales per thousand of population has fallen from +12.8% in July 2013, to +8.5% in July last year, to just +2.4% today. That’s virtually stall speed, as most people who want, need, and can afford a new car have already bought one.

The massive stimulus of ZIRP and a stock market bubble have barely gotten June and July total sales back to levels of 11 or 12 or even 13 years ago when the economy was just coming out of recession. And I have to wonder if the fact that May total sales did manage to soar all the way back to peak housing bubble and internet bubble levels after 66 months of massive stimulus wasn’t a kind of bell ringer to warn us that auto sales had reached peak bubble this time too.

The post Here’s What They Didn’t Tell You About Car Sales appeared first on The Wall Street Examiner. Follow the money! See and understand the liquidity flowing from the Fed, Treasury, and other major central banks and primary dealers as they impact markets in the Wall Street Examiner Professional Edition.