trumpeted the Wall Street Journal on Friday. It added that,

“Industrial production, a measure of output in the manufacturing, utilities and mining sectors, rose a seasonally adjusted 0.6% in July from June, the Federal Reserve said Friday. It was the largest gain since November and the second straight increase for the measure after starting the year with five monthly decreases…

Economists surveyed by The Wall Street Journal had expected a 0.4% increase in industrial production last month.”

So, in Wall Street parlance, it was a “beat,” because the headline abstraction was stronger than what Wall Street economists had guessed it would be.

That guessing game, and the Big Media (BM) reporting of it is aimed at the seasonally manipulated figure that attempts to present an abstract impressionist view of the trend. It may or may not do a good job of that. We have no way of knowing unless we look at the actual, unmanipulated data, which neither the Wall Street Journal nor any other BM outlet bothers to do. In order for us to know whether the BM reports have any basis in reality, we need to know what the reality was–what the actual number was. Luckily for us, the government does report the actual data, although you would never know that if you only read or watch the BM.

In analyzing actual data, we need to know how the performance of the current month compares with this month in prior years, and also how the trend is performing. We can do that by looking at the annual growth rate to see if it is slowing, accelerating, or running at about the same rate.

July is always a down month for the industrial production index, which measures the volume of output of US mines, factories, and utilities as compared with the output of a base year, which in the case of the BEA data is 2012. The index is expressed as a percentage of base year unit output. Because it measures volume, it’s a pure measure of economic growth which does not need to be adjusted for inflation.

July is always a down month. Over the past 10 years the average drop in July was -2.2, with a range of -0.6 to -3.8. The decline this year was -1.6, which is better than the average and better than the -1.8 last year in July. In these terms this looked like a pretty good performance for July.

But in terms of the trend, with a year to year gain of +1.7% it’s only marginally better than the last 2 months. That compares with +1.6% in May and +1.5% in June. The growth rate has been weakening since last November when it was +4.7%.

I won’t quibble with the people who say that Fed policy was responsible for driving growth. When industrial production, stock prices, and the size of the Fed’s balance sheet are plotted on an unscaled chart, it does appear that there’s some directional correlation. 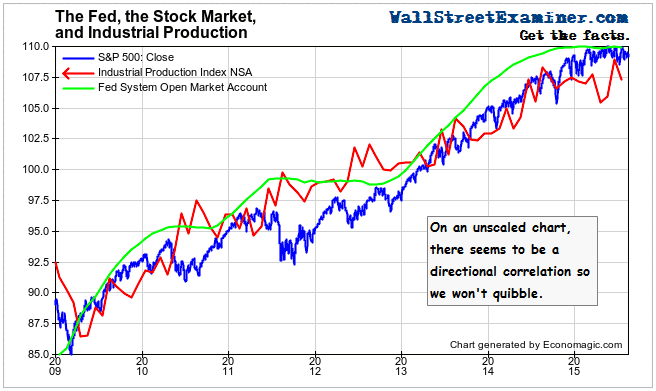 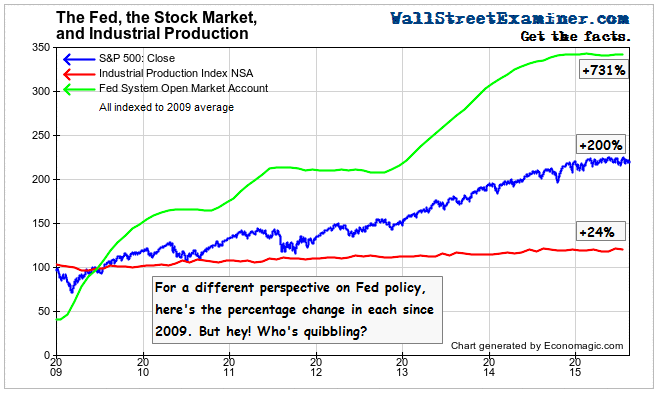 Here’s something else we should keep in mind. From 2007 to 2014 there was an oil and gas production boom (or bubble, if you will) that played a big part in boosting that production. Was the Fed responsible for that, or was it a little technological breakthrough called fracking? No doubt the Fed was frick to the oil industry’s frack, but I suspect that the fracking would have happened without the fricking Fed. However, we’ll let the fricking Fed’s fricking cheerleaders give the Fed all the credit it deserves.

One thing is clear. That oil and gas boom contributed mightily to the growth of industrial production. 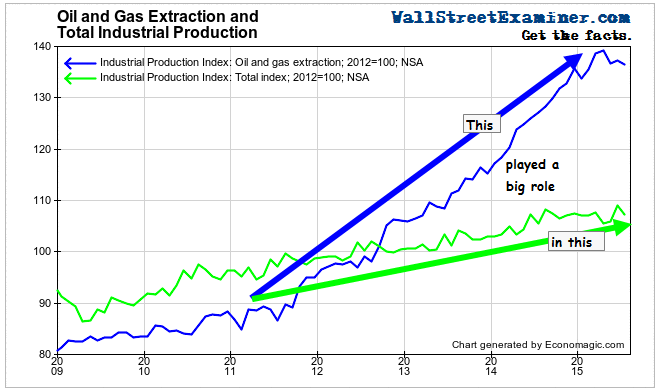 In fact, as oil and gas extraction was exploding between 2009 and 2014, its component weight in the total industrial production index went from 6% to nearly 14%. Today it’s back to near 8%.

Here’s what the industrial production index ex oil and gas extraction looks like. 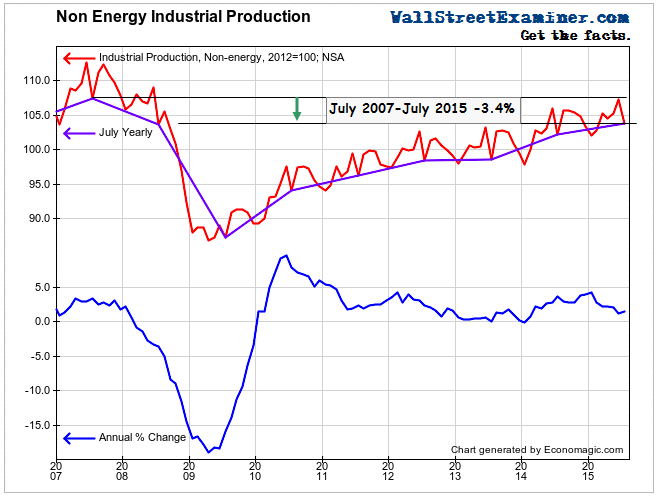 Economists told us unequivocally last year that the collapse in energy prices would be a positive for the US economy. Not being an economist, and armed only with common sense and the absence of a bias imposed by economic mythology, I doubted that. To me, the transfer of retail spending from the gas pump at the MiniMart to the cash register at the WalMart would produce no net gain for the US economy. And I knew that the increase in $15,000 per year WalMart jobs could not make up for the loss of $85,000 a year jobs in the oil and gas industry. I also felt that slowing energy production would have ripple effects throughout related businesses and the US economy.

The economic priesthood was wrong again. ZIRP has not been boosting growth. Lower energy prices are not boosting growth. Whatever credit can be given to Fed balance sheet expansion and ZIRP for economic growth including the role they may have played in adding stimulus to the energy boom, one thing should be clear to everybody who isn’t blinded by devotion to conventional economic religion by now. That is that ZIRP has worn out whatever limited usefulness it may have had.

After the bubbles comes their unwinding and the accompanying financial chaos. The bubbles left behind in the wake of delusional central bank policies have either ended or are in the process of ending. They leave only a hollowed economy and fragile finance markets, more vulnerable than ever to the inevitable bubble devolution.

That’s what you need to know.

The post Here’s What You Need to Know About Industrial Production That Big Media Didn’t Tell You appeared first on The Wall Street Examiner. Follow the money! See and understand the liquidity flowing from the Fed, Treasury, and other major central banks and primary dealers as they impact markets in the Wall Street Examiner Professional Edition.