The Daily Data Dive: Here’s Why The Housing “Recovery” Is Not All That

“Pace of U.S. New Home Sales Slows in May” was the Wall Street Journal’s headline on the Census Bureau’s report released last week. But the body of the article had an entirely different tone, exemplified by “Broadly, other data show the housing market as a bright spot in an otherwise choppy economy.” Apparently everything is just peachy in the US housing market. We took a big picture look at that assumption last week and found it wanting.

The story gets even less positive when we take a deeper dive into the Census Bureau’s new home sales data. The bottom line is that the new home construction industry has seen no growth beyond the historical migratory pattern of US retirees moving toward warmer climes, and even that has been less than robust. Another trend that sticks out is the one toward the housing industry increasingly walking away from serving middle income households and below.

The Commerce Department calculated nominal median household income in 2014 at $53,657. To bring that to 2016, I adjusted that figure upward by 4%, to approximately $55,800. At standard mortgage qualifying ratios and current interest rates, the median household could afford a mortgage of approximately $190,000. Most buyers in that income range would have only a small down payment, if any, so most could comfortably afford to pay no more than $200,000.

Sales of new houses of less than $200,000 totaled an estimated 9,000 units in May, tying 2013 for the record low. The super low mortgage rates subsidized by the Fed have not helped the typical middle income family afford a new house because builders are no longer building houses they can afford. 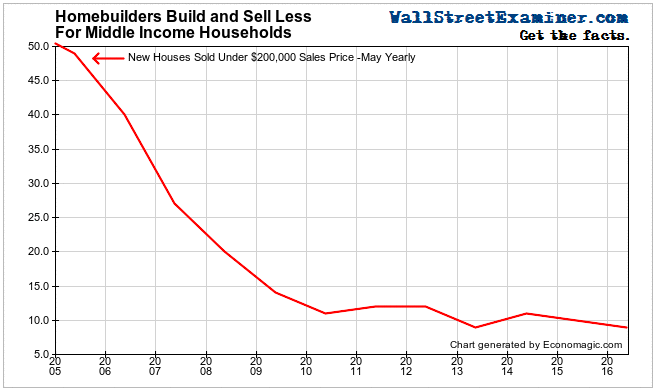 Driven by profit, naturally, builders have found a sweet spot in the $200,000-$399,000 range where they now sell the most houses. That range would be affordable for households earning between $56,000 and $98,000 per year at standard qualifying ratios and current mortgage rates, and assuming a 10% down payment. Obviously there are millions of families in that income strata. Builders appear able to profitably sell a lot of houses in that price range. But are they really selling “a lot” of houses?

The answer is yes when compared to the housing market crash bottom in 2010, but “not really” in terms of the longer term perspective. Sales in the $200,000-399,000 range for May are up 190% from May of 2010. That sounds like a massive boom until you consider recent history. Sales in this price range are down nearly 40% from bubble peak sales in May of 2005. 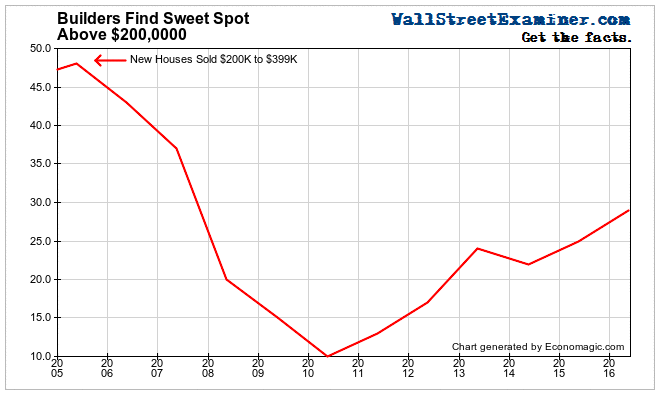 Considering that population has increased and that nominal household incomes have been rising, the recent gains are even less impressive. In the big picture, the recovery looks more like what market technicians would call a “dead cat bounce.” Expanding the time horizon back to 2002 when the Commerce Department first began to collect this data, and adjusting for population growth since then, we see that sales haven’t even reached the level of the bottom of the 2002 recession. 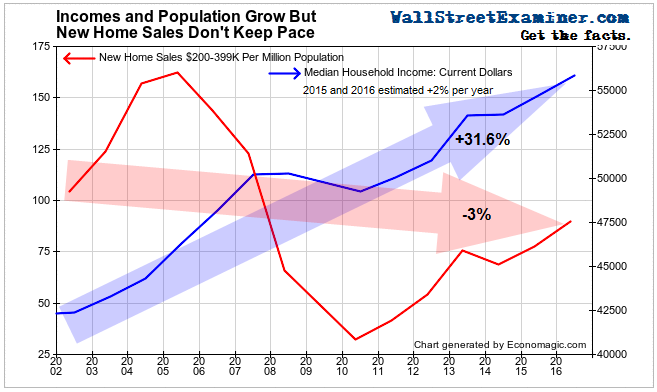 Median household incomes have risen by nearly 32% since 2002, which was a recession year, and yet new home sales in the $200,000 to $399,000 price range are no better than the level reached then. Mortgage rates have fallen from 6.8% then to below 4% now, which dropped mortgage payments in this price range by $600-$700 per month, so it’s clear that some things are amiss in the US economy that are suppressing home sales and holding back growth generally.

Those somethings are debt, inflation, job insecurity, medical costs, and higher education costs, among other influences. Those forces are eating away at the ability of an increasing number of US households to afford the purchase of a home. We can lay the first three of those forces directly on the doorstep of the Fed, which promotes easy credit and financial engineering schemes which sap the lifeblood out of the US economy.

We must question whether the growth that we have had since the 2010 bottom is really systemic growth, or is something else going on that looks like “growth” but really isn’t. Breaking all new home sales down geographically, it starts to look like “something else.”  That something else is the Sunbelt migration of retirees, with new home sales in the South outstripping all other regions combined. 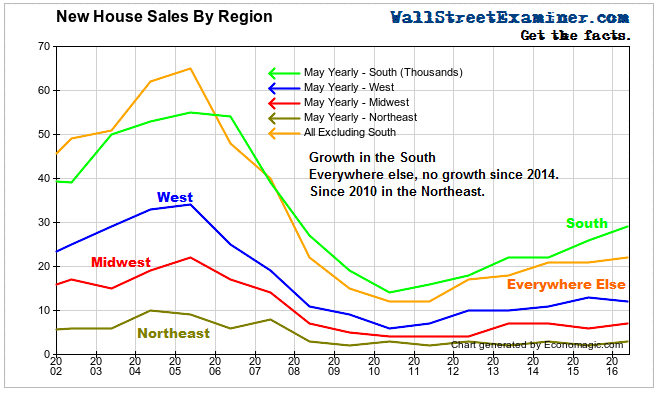 Prior to 2006 there were still more new homes sold in the rest of the US than in the South. In 2006, which was when the housing bubble began to deflate, sales in the South began to outstrip the rest of the country combined. That gap has widened since 2014. Since then, the South has risen again by almost 32% while the rest of the country has only been up by less than 5%. That gain was due to slight upticks from moribund, rock bottom levels in the Northeast and Midwest in the last year. Even the West had a contraction in the past year.

There’s no sales data on a state by state basis, but we do know from census bureau data that the 3 fastest growing states from 2014 to 2015 were Texas, Florida, and California. Both Texas and Florida are in the Census Bureau’s South Region. Those 3 states accounted for 48% of the total population growth between 2014. The rest of the states were also-rans but the 5 of the next 10 fastest growers were also in the South, with the other 5 in the West.

Population estimates by state are not yet available for this year. We can look at BLS data as a proxy. It shows that jobs growth in Texas has slowed dramatically in 2016, while it continues to boom in California and Florida.

Much of the past growth in Texas was tied to the oil boom which has since turned to a bust. California has a diversified economy, but Florida’s economy is still joined at the hip with retiree migration. Florida’s jobs grew by 245,000 in May. California jobs increased by 152,000, and Texas had only 2,000 more jobs, which statistically speaking is zero. Home sales in Texas are likely to become a drag on the South region in the months ahead. Asking 2 states to carry the load of housing growth for the entire US is asking a lot. The downtick in the West over the past year shows that even a strong California can’t carry the West to a gain. Gains in the South will now depend on Florida.

So is the growth in new home sales part of a trend of systemic growth, or is it mostly about retirees moving South? Sales in the South rose in the past year while the West had a downtick and the Midwest and Northeast have been flat since 2013. This appears to be more about the age old demographic trend of folks moving toward the sun when they hit retirement age. In spite of this trend, South region sales are still more than 25% below their level at the bottom of the 2002 recession. That’s not much of a recovery. WIth Texas faltering, it’s unlikely that this will improve any time soon. That doesn’t bode well for the US economy as a whole.

The sales gains since 2010 have had the benefit of central bank driven, falling and super low mortgage rates. Either the Fed or the ECB and the BoJ have been constantly buying massive amounts of fixed income securities since 2009. Their buying has pushed long term interest rates down to heretofore unimaginable levels. Even with this huge tailwind, the housing market has barely recovered.

This suggests that the Fed will never allow interest rates to rise. So what’s the endgame? It’s difficult to imagine one that has a positive outcome. It’s also not clear how long the Wall Street establishment and its mainstream media house organs can keep up the illusion of a healthy housing market if constantly fewer households are able to purchase a new house.