The Fed reported that industrial production rose 0.8% in January.

As with all government data that was a seasonally adjusted (SA) fictional number. Statisticians use statistical sleight of hand in an attempt to extract the trend from the actual data. Often the resulting number misses the mark. Sometimes it misrepresents the trend completely. Government statisticians subsequently revise the number for the current period over ensuing months and years to fit the seasonally adjusted data for this period to the curve of the actual data.

As a technician, I find it simpler and more accurate to plot the actual data on a chart and draw a straight line or two around the highs and lows of the line on the graph to clearly view the trend. We’ll get to that, but first let’s look at how the mainstream media reported the news.

The Wall Street Journal’s headlines were the usual foaming at the mouth, typical of whenever there’s a government data release that appears bullish.

The increase was the biggest since November 2014

They explained the headline thusly:

U.S. industrial output rose at the fastest pace in more than two years in December as activity surged at utilities and manufacturers inched ahead, the latest sign of steady but unspectacular economic growth.

Industrial production—a measure of output at factories, mines and utilities—jumped 0.8% from a month earlier, the Federal Reserve said Wednesday, the biggest increase since November 2014. Economists surveyed by The Wall Street Journal expected a 0.7% increase.

Amazingly, they did report the critical factor causing the gain, but they didn’t connect the dots to show just how important it was.

Wednesday’s report showed output by utilities, largely a reflection of the weather, rose 6.6% last month, the strongest gain since December 1989. The move was “largely because of a return to more normal temperatures following unseasonably warm weather in November,” the Fed said.

What they failed to say was that electric and gas utilities production–yes, because of the weather–was the sole reason for the apparent gain in total industrial production (IP). Without that weather driven increase, IP would have been flat on a year to year basis, hardly a “sign of steady but unspectacular economic growth.”

The Journal reported, “Overall industrial production has gained 0.5% over the past 12 months amid small gains for manufacturing, setbacks for miners and a big rise in the utility sector.” The reported overall gain was correct, (whoopee 0.5%!) but again they neglected to point out that were it not for the rebound in utilities production, the gain in total IP would have been zero.  Furthermore, total IP is still down 2.2% from the 2014 peak, hardly a sign of a growing economy. 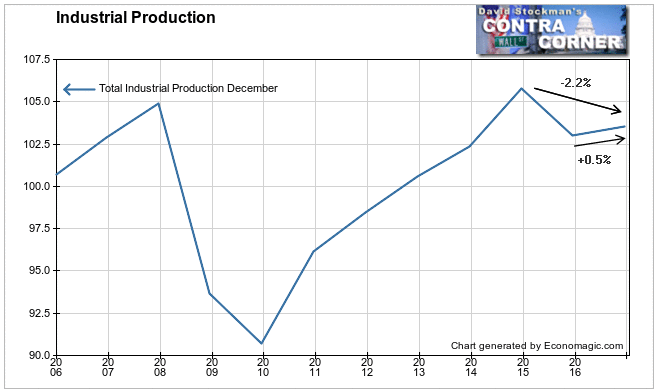 On an actual, not seasonally adjusted (NSA) basis, December saw a rise of 0.6% from November. That was the best December reading since 2011. December saw gains of 0.9%, 1.0%, and 1.5% in the initial years of the recovery from 2009 to 2011.  While this December had a bump, it was still within a longer term trend of lower growth rates. 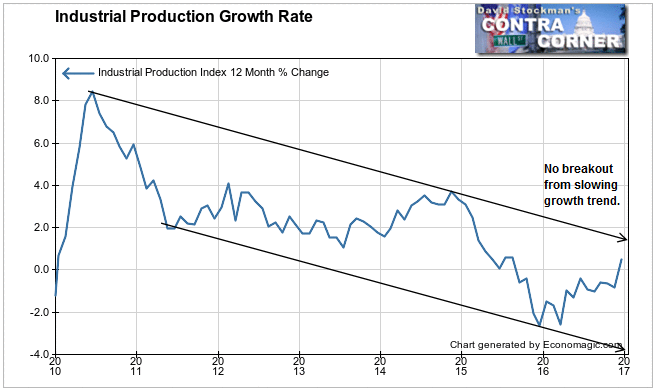 What could possibly have been the cause? Look! Up in the sky! Is it a bird? Is it a plane? No! It’s Supertrump! A visitor from another planet who can leap tall buildings in a single bound!

Alas, it was something slightly more mundane. Usually I laugh when pundits blame the weather for unexpected results in things like retail sales or nonfarm payrolls. The cause and effect relationship there is weak at best. But weather is a real driver of gas and electric utilities production. We obviously use more heat when December weather is colder and less when it’s warmer. December 2015 was the warmest December on record in the US. Electric and Gas Utilities Production fell sharply in December 2015. This December was back to normal, much colder than the year before. Not only that, but remember that November this year was crazy warm, particularly in the heavily populated Northeast. There’s no mystery here as to why utility production rose so sharply. It wasn’t economic growth.  It was the weather. 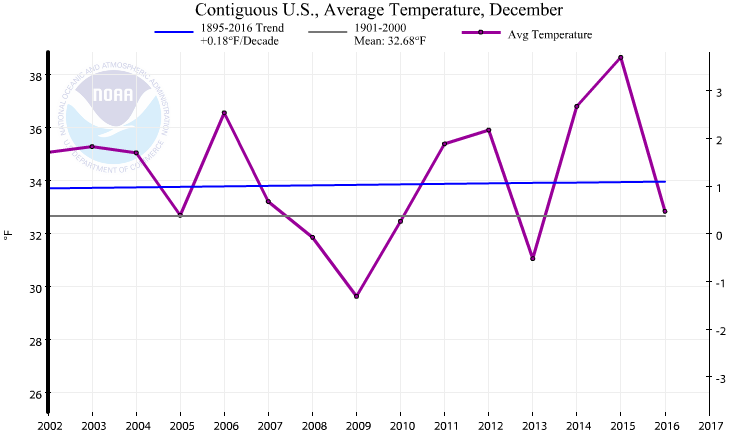 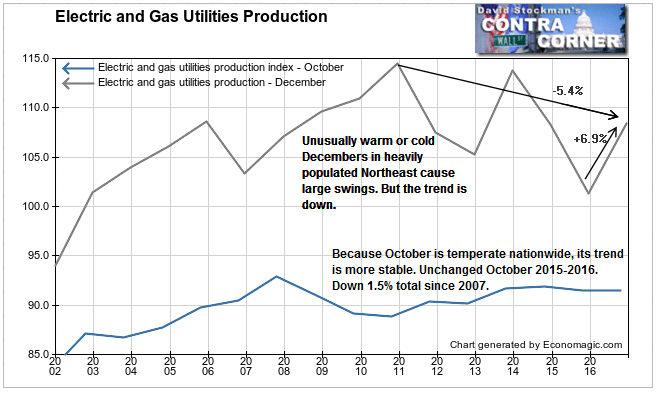 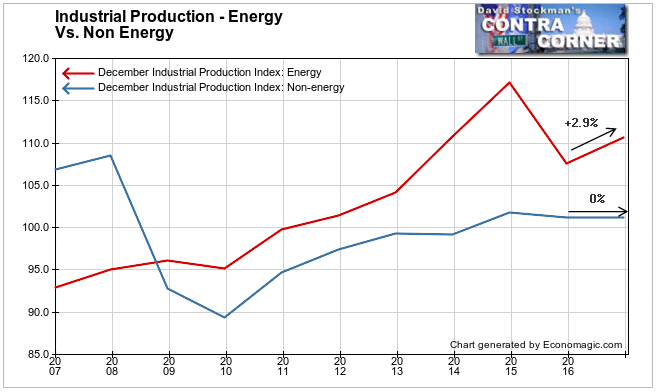 In fact, oil and gas extraction were negative year to year, so the entire gain in the Energy IP index was due to utilities. Non Energy IP was absolutely flat year to year. Where’s the beef in that? 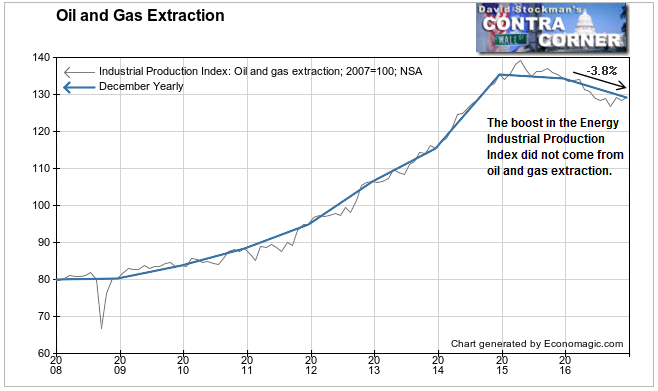 So here we have a case where we really can blame the weather for an anomaly in the data. It was enough to turn what was really a bad month into something that looked good. The economic priesthood will see  this as bullish for stocks, and Fed policymakers will continue to see a slowly growing economy with rising employment. That’s all the excuse the Fed needs to continue tightening.

In reality, the US economy remains weak. It may even be in outright contraction.  Tightening policy in a weak economy is not a recipe for a strong stock market. At some point the bulk of traders and investors will recognize the false narrative. The big dealers who run the show probably already have, and are likely to be  positioning on the short side of the stock market. We should be looking for opportunities to join them.