“Sales of previously owned homes rose in February, a sign that the housing market is healing…” That’s how the Wall Street Journal reported today as it pointed to a 1.2% increase in the seasonally adjusted (SA)  nonsense National Association of Realtors (NAR) existing home sales (EHS) number. The reported figure is an  annualized number, multiplying the monthly SA error by 12. The report also featured a 4.7% year to year increase which was just plain wrong because it compared 2 SA annualized wrong numbers. The NAR also reported the “good news” that prices rose 7.5% year to year. It’s really good because it’s not inflation, it’s “appreciation.”

The WSJ also mentioned in passing, “News Corp, owner of The Wall Street Journal, also owns Move Inc., which operates a website and mobile products for the National Association of Realtors.” Obviously they have no incentive to report the news with a positive slant, their multimillion dollar customer, the NAR, notwithstanding. Rupert Murdoch would never allow cash to influence the honest financial and political journalism, in which he so fervently believes. Thank God for American patriots like Murdoch who support free markets and the Constitution of the United States.

But I digress. It’s just that my admiration for the WSJ and a great American like Murdoch are so great, I can’t resist throwing kudos their way. But back to the topic at hand…

The NAR is kind enough to report the actual, non-seasonally finagled monthly number of existing home sales. This number is much easier to analyze because it’s actual data, not the abstract impressionist art over which financial journo art critics fawn.

The chart below shows the level of closed sales and contracts each month. The trend is clear. But WAIT! What’s this? Last month’s level is  3.3% BELOW the level of February 2013! It’s not because of any difference in mortgage rates. They are around the same level now as then. The market is apparently just less active now than then.  Rising prices have a way of excluding more potential buyers from the market. 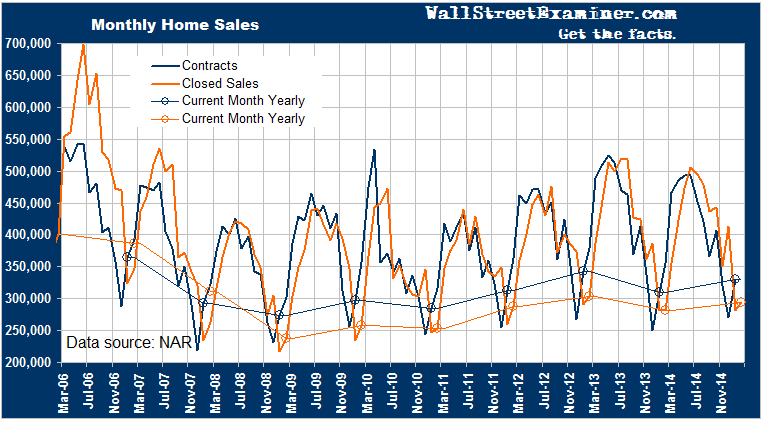 There’s also a gap between the big uptick in January contracts (NAR Pending Home Sales) and smaller gain in February closed sales (NAR Existing Home Sales – EHS). As contracts foreshadow closings in the subsequent month, this gap develops every year in February, possibly because February is a short month or possibly because more people who go to contract in January prefer to settle in March. In any case, expect a bigger jump in EHS in March as these contracts go to closings. But it would take a miracle to catch up with the March 2013 level. Do you believe in miracles?

Perhaps of greatest interest is the 7.5% year to year gain in sale prices (green line in chart below). This is almost a straight line continuation of the housing inflation trend that took off in 2012. Because actual housing prices are not counted in the CPI, you don’t need to worry about this. It’s not inflation, at least according to the BLS or conomists, and the mainstream media shills who regurgitate their idiotic crap. 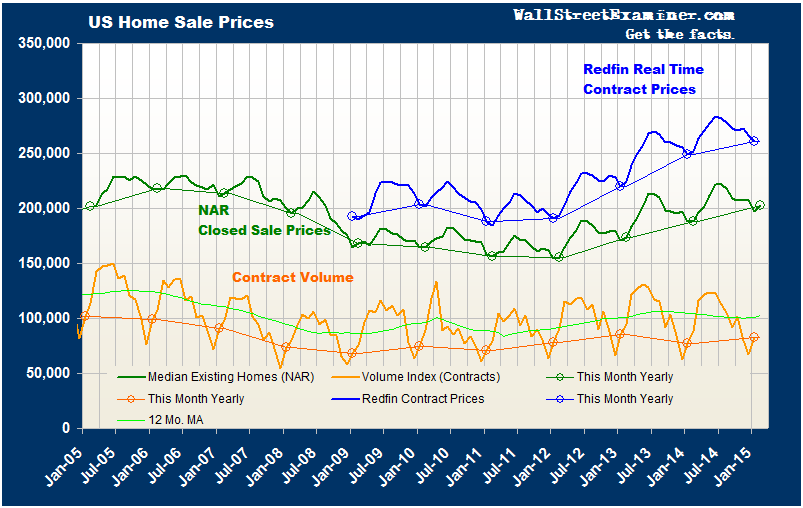 The problem is that ZIRP suppresses inventory. Owners who would ordinarily cash out at a certain point in their lives, don’t, because the opportunity cost is too high. Their house is worth more to them as an asset than cash would be, so they hold on to their properties rather than liquidate. As a result, listing inventory stays near record lows. Low inventories mean that prices will continue to “appreciate” even though demand remains modest. 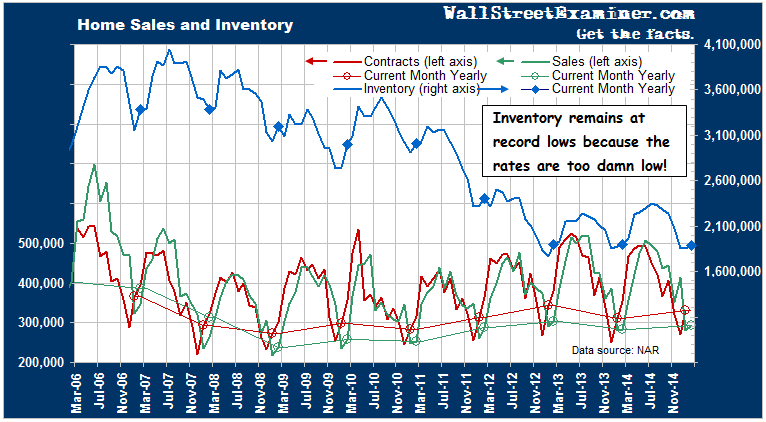 If interest rates ever do rise materially and more inventory comes on the market as a result, LTFO! Maybe that’s another reason why the mealy mouthed Yellen is pussyfooting around looking for excuses not to raise rates. It’s why we should all appreciate that the Fed supports asset “appreciation.” The Fed made our bed. Now we gotta sleep in it.

You see, fraud is good. Fraud works. Fraud clarifies, cuts through, and captures the essence of the evolutionary spirit of conomics and central banking.

And the bigger the fraud, the better, as long as they keep it going forever.