Private spending on capital goods is a measure of business confidence in the economy. If business people believe the economy will grow, they invest more in plant and equipment. If they are not optimistic, they pull in their horns. This week’s Commerce Department report on Durable Goods orders contains a nugget or two that help us to see how business people are behaving in that regard.

The picture isn’t good. Apparently business people have been growing less confident in the growth potential of the US economy for the past 16 years. That belief, and the reduction in investment that follows from that belief, runs the risk of being a self fulfilling prophecy. This isn’t just a long term phenomenon. Business investment in capital goods has been flat since 2011, and has been declining for the past 2 years. Meanwhile, over the 5 years that growth in business capital spending has stalled, stock prices went to the moon. The disconnect matters. 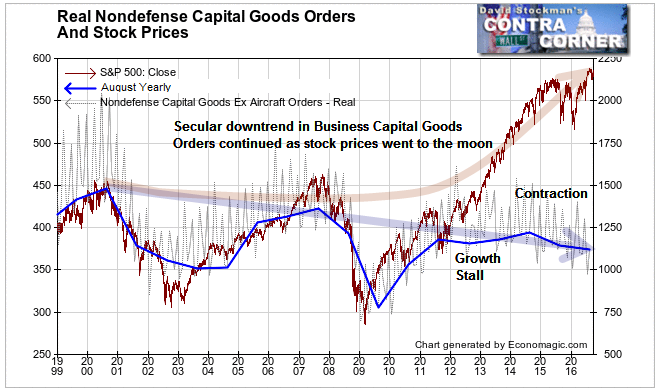 Capital goods have a limited life. Most need replacement within 10 years. If such replacement is delayed, as was the case during the 2008-09 crash and depression, a strong rebound is inevitable.   Replacement can only be delayed for so long, until pent up demand reaches the point where it begins to actualize.

This is inherent in the natural business cycle. Such rebounds do not require 0% interest rates to occur. Economists and central bankers may argue that ZIRP was needed to trigger such a turn in 2009, but the turn would have come whether rates were 0% or 5%. They always did so in the past, and would have done so again in 2009. The recovery that began in 2002 was a case in point. 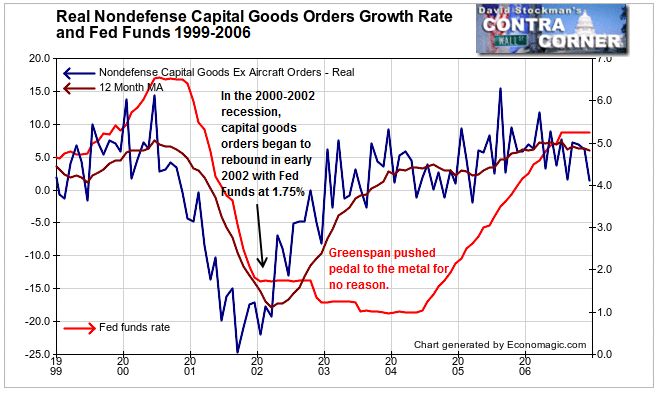 Even assuming ZIRP was needed as a trigger, after a few months it would no longer have been. In fact, 0% interest rates have had no effect since that initial rebound. The growth phase slowed in 2012, settled into a trend of replacement only, with zero growth, and then began to steadily contract in late 2014, a trend that remains in force today. 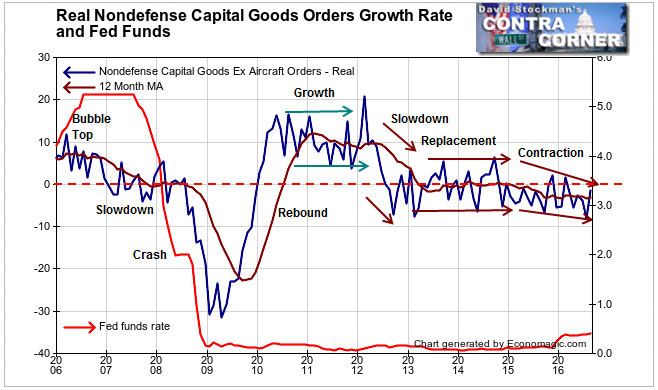 It appears that since 2011 we have gone through an entire business cycle with rates pinned at zero for no reason. The Fed has put us in a box. It can no longer even pretend to enhance a rebound by lowering rates.

Capital goods aren’t the only aspect of business investment. In addition to equipment, there’s also physical plant, that is, the buildings that house the business, whether commercial, industrial, retail, or service. To get an idea whether investment in buildings changed the picture any, I created a combined index of non defense capital goods plus private investment in commercial and industrial property. I converted that index to real terms using the PPI for construction. 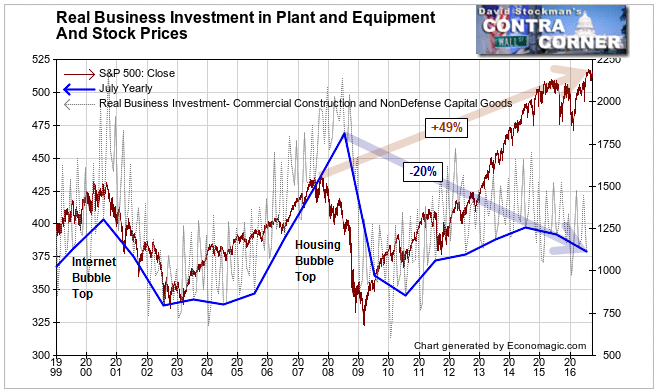 There should be a connection between business investment and Commercial and Industrial Loans. Businesses typically borrow the funds for purchases of equipment or to fund construction of physical plant. From 1999 through 2014, such borrowing moved roughly concurrently with business investment. Not only the timing, but the relative directions were similar. But in 2012 the relative directions of the curves of the two series began to diverge as growth in business investment slowed while C&I Loans soared. In 2014-15, the normal relationship became completely unhinged. Businesses pulled in their horns in making real investments, but they continued to increase their borrowing exponentially.

Business borrowing had always tracked real business investment until 2014. Then businesses stopped investing in plant and equipment. But they continued borrowing at a breakneck pace. It was as if the borrowed funds were disappearing into a black hole. But in spite of there apparently being no tangible assets to back the new borrowing, banks have been all too happy to take the business. The credit bubble has been expanding at a breathtaking pace as a result.

At one point in early 2015 C&I lending was growing at a  13% annual rate. That has only slowed to a 9.5% growth rate today while real business investment has been shrinking.

Where’s it going? We should all know the answer to that question by now. Driven by ZIRP and massive amounts of excess cash in the system, corporations are borrowing to buy back their own stocks. CEOs, CFOs, and their fellow executives conspire to issue massive stock option grants to themselves. Then the have their companies borrow the funds for free to buy the stock issued under those option grants. They shrink the shares outstanding and drive their stock prices higher in the process. As they raid their companies, everybody’s happy because their stock prices go higher. Corporate boards and regulatory bodies do nothing to stop the looting because the scam looks like a win win for everybody. 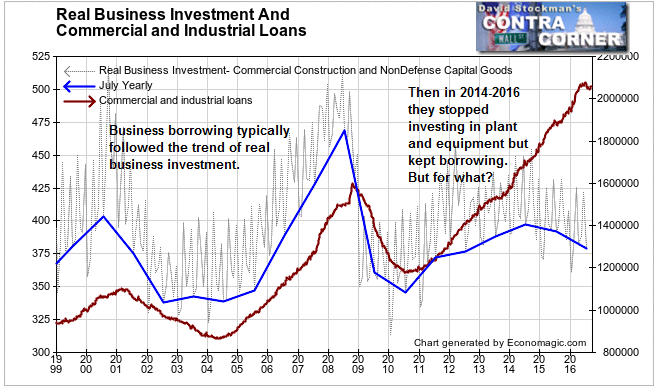 But it’s not. It’s just another massive bubble, a financial engineering bubble. It is a bubble driven by the cold calculations of the criminal masterminds in the C-suites of America’s corporations. It is a bubble enabled and funded by the mass insanity of central bankers and clueless investors around the world. And it is a bubble egged on by the cheerleaders on Wall Street and their financial media handmaidens. 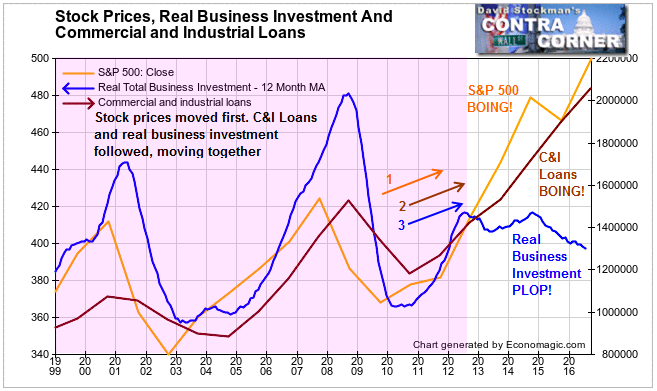 So party on, Garth! Party on! But you might want to consider tiptoeing out the back door before they lock the exits.