Hey Fed! Get A Grip On Your Inflation Reality Gap With July PPI

One of the best measures of consumption goods inflation has now been above the Fed’s 2% target for 19 consecutive months.

The BLS Producer Price Index for Finished Consumer Goods Excluding Food and Energy rose at an annual rate of +2.9% in July. The inflation rate of the final cost of consumer goods to retailers has risen faster than the Fed’s target rate of 2% since January 2014 and the rate has generally been accelerating throughout that time. This is a fair gauge of inflation because, unlike the core CPI and the Fed’s favored measure, the Core PCE, this measure isn’t manipulated to exclude or suppress the prices of everything that is rising in price. 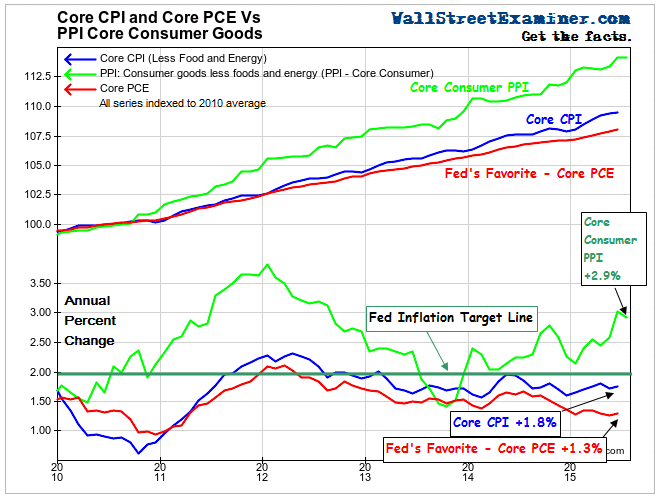 The BLS suppresses its inflation gauges first and foremost by excluding asset prices, where most monetary inflation has been expressed for the past 6 years. Conventional economics theory does not consider rising asset prices to be inflation. Economists call rising asset prices “appreciation” and then conveniently ignore asset inflation and the disastrous consequences of asset inflation. Instead, conventional economics focuses on the inflation of consumption goods, favoring measures that do not accurately measure even consumer price inflation. The CPI was never intended to measure inflation per se. It was intended to index government benefits and therefore is incentivized to keep the number as low as possible.

Everybody is well aware that the BLS uses “hedonics” and “substitution”. The former arbitrarily adjusts rising prices downward on the subjective basis that their performance quality has improved, while the latter inserts more weight for hamburger and less for steak when the price of steak rises. But the BLS’s biggest suppression technique is to overweight the housing component of CPI, and then refuse to measure it accurately.

Housing accounts for 31% of CPI, but instead of using the input of actual house prices or market rents, the BLS uses a made up number called Owner’s Equivalent Rent (OER), which it plugs in at around the rate of CPI. This perfectly circular logic keeps the CPI trundling along at less than 2%. In actuality house prices are inflating at a national average of around 6%, and market rents are rising 4-5% on average, nationally depending on the gauge, but much faster in many cities.

The BLS did include house prices in CPI until 1982, but it became too expensive, so they removed that component from the measure and substituted OER.

BLS also underweights items like health care and education costs which are inflating far faster than the officials who make the rules for these indices want to see. So those items are suppressed. The Fed’s favored PCE from the BEA uses even more suppression techniques, keeping its rate of increase at well below 1.5% this year.

WIth China devaluing its currency, pundits have concluded that US consumer prices will fall even farther below the Fed’s inflation targets. However, the landed input prices of imported goods are but a fraction of the finished consumer product prices. Transporters, distributors, and retailers add layer after layer of additional costs and margins. My bet would be that the wholesale prices of finished consumer goods won’t come down much, and if they do come down at all, retailers won’t be passing cost cuts along to consumers any time soon. In those rare times when costs fall, retailers typically use that to pad their margins rather than cut prices.

As long as the Fed and its Keynesian sycophant economist cheering section choose to only pay attention to inflation gauges that ignore inflation, the Fed might never see its target reached. But the Finished Consumer Goods PPI ex food and energy, a fair measure of consumer prices, has been above the Fed’s target and accelerating since early 2014. The Fed is not only behind the curve, it has driven right through it. Maybe a dim awareness of that deep in the recesses of the delusional central banker mind will keep the Fed on track for an attempt at an interest rate increase this year.

Meanwhile, the question is how long the suppression techniques applied to CPI and PCE will continue to work. Eventually these measures should close at least part of the inflation “reality gap” as the OER factor begins to slowly heat up in delayed recognition of what’s going on in the real world. There was no sign of that in the June CPI. The July CPI will be posted next Wednesday. Won’t it be fun if this is the month when the government fudge numbers finally begin to close the “reality gap.” Just imagine how the markets might react if the headline numbers exceed 2%. Woo.

The post Hey Fed! Get A Grip On Your Inflation Reality Gap With July PPI appeared first on The Wall Street Examiner. Follow the money! See and understand the liquidity flowing from the Fed, Treasury, and other major central banks and primary dealers as they impact markets in the Wall Street Examiner Professional Edition.