The world passed a historic milestone in the past week when according to Fitch negative-yielding government debt rose above $10 trillion for the first time, which as the FT adds envelops an increasingly large part of the financial markets “after being fuelled by central bank stimulus and a voracious investor appetite for sovereign paper.” It also means that almost a third of all global government debt now has a negative yield. The amount of sovereign debt trading with a sub-zero yield climbed 5% in May from a month earlier to $10.4 trillion, pushed higher – or lower in yield as the case may be – by rising bond prices in Italy, Japan, Germany and France.

Japan and Italy fuelled the increase in negative-yielding debt in May, with three-year bonds issued by the latter sliding below the zero mark.

The ascent of the negative yield, which first affected only the shortest maturing notes from highly rated sovereigns, has encompassed seven-year German Bunds and 10-year Japanese government bonds as both the European Central Bank and Bank of Japan have cut benchmark interest rates and launched bond-buying programmes.

The source of this historical capital misallocation is clear: global central banks who are desperate to push all yield-seeking investors, and key among them pension funds, into risky assets in hope of preserving asset price inflation. “Central bank actions are certainly a part of it, but the global search for yield, the desire to find high-quality securities is part of what is going on here,” said Robert Grossman, an analyst with Fitch.” He added that regulations requiring banks to increase capital buffers were intensifying the flight into these securities. Portfolio managers, pension funds and insurers have struggled with negative-yielding notes, which when held to maturity will lose an investor money. Fund managers have nonetheless dived in, as central bank buying increases prices on the debt.

It’s not just government bond though: Corporate bonds with a negative yield have climbed to $380 billion, according to Tradeweb. “You have central banks which have gone through the looking glass and gone through . . . zero that many people thought was unbreakable,” said Sameer Samana, a strategist with Wells Fargo Investment Institute. “Both [the ECB and BoJ] are telling you there are limits to what they can do in taking short-term rates into negative territory. The spread [of negative rates] further out on the curve is probably behind us.”

Perhaps: that is precisely the basis behind Bill Gross’ assessment that the 30 year bond market in bonds is over – there is no longer space for yields to drop. On the other hand, the convexity from long bond duration is now so high that even modest incremental drops in yields result in substantial pick up in bond prices, with absolute return offsetting negative yields. Ultimately it will all be up to central banks.

What this means it that even as the Fed hikes, other central banks will be forced to offset the Fed’s tightening of monetary conditions, lower rates even more and push even more investors into the only “safe” asset class that provides some return  – US paper. As such, it will be ironic if the divergence in rate policy between the US and the rest of the world is what causes the yield curve to invert, because as of this moment it will only take about three rate hikes for the short end to hit ~1% while the long end continues to grind ever lower, and as we reported yesterday, the 2s30s is now the flattest it has been in 9 years. 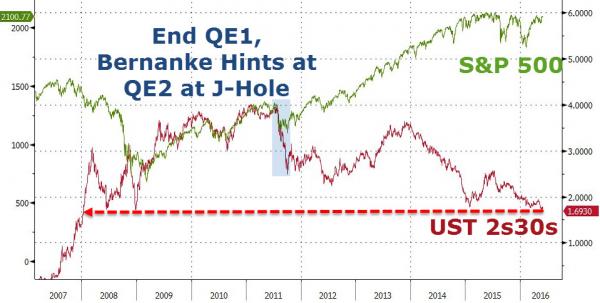