How About A Three-Front War—– Where “Rebels” Will Need Tutors To Get “Vetted” By Clueless “Screeners” Sent By Samantha Power! 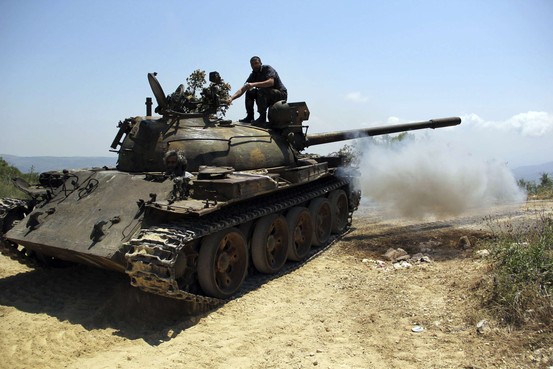 In the old days the preposterous story now running on the WSJ would be readily recognizable as the work of some policy insider smoking out a stupid idea.  But not in today’s whacky world of the Obama White House. These people actually mean to dive right back into the Syrian nightmare less than a year after Vladimir Putin pulled their chestnuts from the fire—-and surely for the last time.

Yes, Obama is going to authorize a sharp increase in military training and supply to the “moderate” opposition. Accordingly, this will enable Washington to open a third front in the Syrian conflagration somewhere between the brutish forces of the Assad regime on the one side, and the blood-thirsty al Qaeda-dominated, America-hating jihadist rebel forces, on the other.

Among the many challenges here is the fact that the added new enemy on the ground in Syria—–the jihadist radicals— dominates the opposition forces and has been organized, equipped and supplied by our erstwhile allies in the region led by Saudi Arabia, Qatar and Turkey.  Of course, the first two are no longer on speaking terms, and the octogenarian King of Saudi Arabia has actually fired the architect of the entire allied policy—the endlessly corrupt, scheming and mendacious, Prince Bandar. Meanwhile, Turkey is led by a mad-man which shows every sign of loosing his grip on power, if not rationality.

Only someone who lunches at the UN Plaza could possibly come up with a plan this stupid. Presumably, at least, the moderate oppositionist to be vetted won’t be that hard to find—-since most of the so-called Free Syrian Army is hiding out in places not located within the known borders of Syria.  So the tutors who will be needed in order to insure that newly designated “moderate” fighters are successfully “screened” by soon to arrive Washington vetters will likely not require hazardous duty pay.

That’s more than can be said for any one unfortunate enough to pass muster and end up in the cross-fire.

Indeed, the real victim of the planned cross-fire is likely to be the long-suffering Syrian people and their immediate neighbors. As the article also notes, success is nearly at hand  on the Syrian chemical weapons front with 90% of Assad’s stockpile already removed. But as even the Pentagon’s multitude of leakers was quick to point out, this latest lunatic foray of the R2P crowd—-Rice, Power and apparently the President himself— could likely snatch defeat from the jaws of victory.

Pentagon leaders had cautioned against proceeding with a military training program before the Syrian regime removes what remains of its chemical-weapons arsenal.

After all, chemical weapons are considered horrific for a reason.

From The Wall Street Journal

WASHINGTON—President Barack Obama is close to authorizing a mission led by the U.S. military to train moderate Syrian rebels to fight the regime of Bashar al-Assad and al Qaeda-linked groups, a move that would expand Washington’s role in the conflict, U.S. officials said.

A new military training program, if implemented, would supplement a small train-and-equip program led by the Central Intelligence Agency which Mr. Obama authorized a year ago.

In a commencement address at the United States Military Academy at West Point on Wednesday, Mr. Obama will signal backing for the new training effort by saying he intends to increase support to the armed Syrian opposition, including by providing them with training. Mr. Obama isn’t expected to provide details about how, or where, that training would be accomplished.

“The president will make clear his intention to expand our support to the moderate Syrian operation and increase our support to Syria’s neighbors, who are dealing with the terrorist threats emanating from the situation Assad has created in Syria,” a senior administration official said.

Syrian opposition leaders say the program would be a step in the right direction but voiced skepticism that training alone could turn the tide. Opposition leaders say the U.S. also needs to give moderate fighters access to more powerful weapons, including antiaircraft missile launchers, so they can take out Mr. Assad’s helicopters and attack planes.

Defense officials said it also remains unclear which countries in the region would agree to host such a mission and what criteria would be used to screen rebels to prevent Islamists aligned with al Qaeda from taking part. “The devil’s in the details,” a senior U.S. military official said. “A lot of conditions have to be met.”

The move toward deeper U.S. involvement reflects a growing realization within the White House that more needs to be done to build up the capabilities of a proxy force inside Syria capable of challenging al Qaeda. Washington increasingly fears al Qaeda’s network of foreign fighters in Syria and Iraq will become capable of threatening U.S. allies in the region, including Jordan.

The move also comes in response to mounting pressure on the White House from Middle Eastern allies who say Mr. Obama’s reluctance to support moderate fighters has allowed al Qaeda-linked groups to now dominate the opposition.

U.S. officials counter that Turkey and Gulf states fueled the al Qaeda threat by turning a blind eye to the influx of foreign fighters and by funneling their support to disparate groups on the battlefield, splintering the opposition.

Washington’s Gulf allies were particularly critical of Mr. Obama’s decision last year to call off planned airstrikes against Assad regime targets in exchange for a deal to remove his chemical arsenal. Nearly all of Mr. Assad’s declared stockpile of chemical weapons has been removed from the country, and a senior U.S. diplomat said the rest should be shipped out soon.

The U.S. ambassador to the United Nations, Samantha Power, and Secretary of State John Kerry have been the leading advocates within the administration of creating the military-led training program. They have argued that more U.S. support is needed to weaken Mr. Assad and his allies, and to challenge al Qaeda.

Many Pentagon officers voiced skepticism of the proposed training mission. In recent private meetings, Defense Secretary Chuck Hagel has questioned the feasibility of vetting a sufficient number of rebels to make a difference, according to officials…..

The Western-backed Free Syrian Army has been fighting a two-front war, against Mr. Assad and his allies on one side, and against al Qaeda and its allies on the other, but commanders say they have received scant support from the U.S.