Dow Jones’s Marketwatch, inexplicably, does a better job of being “fair and balanced” in reporting financial news than its sister in crime, the Wall Street Journal, or their evil stepmom, Fox Business. The great humanitarian seeker of truth and paragon of journalistic virtue, Rupert Murdoch, controls all of them. So it’s surprising to find occasional points of light in that evil empire. Marketwatch’s Washington Bureau Chief Steve Goldstein is one of them, and one of a few financial journos who at least makes an effort to seek and report the facts, rather than hewing strictly to Wall Street’s company line. I had a conversation with Goldstein on Twitter on Tuesday.

Goldstein had tweeted, “How much good data is needed for Treasury bulls to capitulate? (Lots, probably, but 10-yr up 7 bps today).”

I inferred that he was referring to the idea that good economic data should push Treasury yields higher. It’s a broadly accepted misconception that there’s a cause/effect relationship between economic data and bond yields. I sent him a Tweet alluding to the real drivers of Treasury prices, supply and demand. “Maybe, but there’s a temporary shortage of cash now as Treasury issues $87B in new paper 8/28-9/4, including $32B today.”

He responded, “That’s surely not issue (no pun intended) at the long end.”

Me in a series of tweets: Sure it is. Absolutely positively. The cash must be raised to pay the bill. This is enormous supply in one week.

But it’s a short term effect. Couple days at most. Then the market snaps back to whatever trend it’s on.

Treasury supply is one of THE most important, and widely ignored, short term market drivers for both bonds and stocks.

It directly impacts the Primary Dealers in their market making functions, and other buyers, across the spectrum of markets.

Goldstein was open enough and curious enough to ask me if I had data. So I sent him my latest Treasury and Fed reports, along with the emailed comments reproduced below, which briefly illustrate a couple of key points in how I view markets. The Fed and US Treasury are the major players in driving price trends in the markets along with two other mammoth central banks.

Goldstein then asked “What’s the correlation between S&P 500 and Treasury issuance, and how does that compare to QE?” This question really gets to the heart of what drives the markets, and what’s wrong with them.  Below is my quickly penned, somewhat disjointed response.

That’s a great question with an answer that requires more than a one liner.  Here are a few thoughts off the top of my head, which probably don’t directly answer the question, but do give an overview.  Generally, as Treasury issuance declines there’s less competition for stocks from a supply/demand perspective.  In theory its bullish for stocks (See Clinton era) but the unprecedented nature of QE from the 3 major central banks since 2009 has so tilted the playing field that almost nothing else matters. Treasury supply is the biggest driver of the increase in the total supply of financial assets, but $6.2 trillion in central bank money printing since 2009 renders it almost moot. 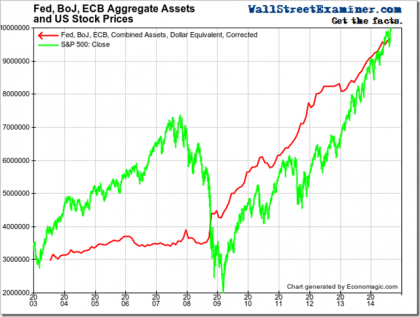 The correlations between QE of the 3 major central banks and both stocks and Treasuries are high, with Fed and BoJ correlating most highly with US stock prices.  Briefly discussed here  and here (videos).

The ECB typically correlates more closely with Treasury yields. There are reasons for all of these. 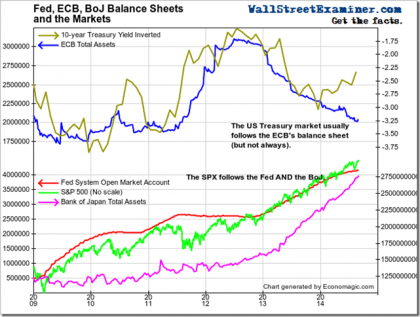 The ECB is different. It does not buy assets directly and does not operate via Primary Dealer network. Its operations are virtually always lending operations and are voluntary except when the financial system is in crisis and banks would collapse without the funding. At the same time, the ECB correspondents are the same large banks that operate in US markets, including many Primary Dealers. 4 Primary Dealers are European banks and most large US banks operate in the Euro system, so those flows can and do go directly to fund a UST carry trade when crisis conditions are extant.

The Fed has more or less calibrated the amount of QE each month to the amount of T supply. Since there are always other buyers of Treasuries, this creates the excess liquidity that Bernanke expected to boost stock prices. The only problem was that his trickle down theory doesn’t hold water. It pooled at the top.

As Treasury supply declines, the Fed needs to do less QE. At the same time, the BoJ is still pumping into world liquidity pool and ECB is threatening to. Those are the wild cards that could keep markets levitated and Treasury yields suppressed as the Fed cuts its purchases to near zero. The Fed will keep its balance sheet flat, but will still be buying around $15B per month in MBS reinvestment purchases, which will still flow into Primary Dealer accounts.

There are many, many moving parts in this. I also track FCB purchases of Treasuries, Primary Dealer weekly purchases, banks etc. etc. etc. Different things are moving different markets at different times. Careful observation of a wide variety of central banking, government, fiscal, and banking trends is essential to catching the first signs of trend change.

In terms of careful observation, I apply technical analysis to economic data. It’s essential to recognizing trends and turning points.  No fancy econometric models, which are garbage, anyway.

Finally, I sent him this. 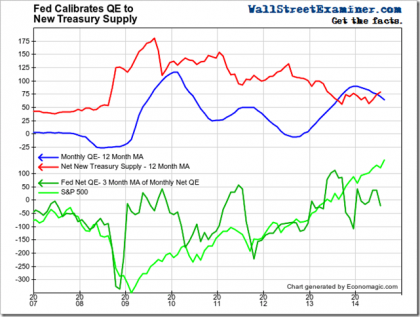