How “Mr. Dig Dig” Buried Wuhan In Debt: Local Government Financing Vehicles Are At The Heart Of China’s Ponzi

By LINGLING WEI and BOB DAVIS at The Wall Street Journal

WUHAN, China—A little over a year ago, a Chinese credit agency downgraded a government-owned financing company in this dusty industrial city. Default—nearly unheard-of in China on government bonds—was a possibility, it said.

But during discussions with lenders, city officials made sure Wuhan Urban Construction Investment & Development Corp. could keep borrowing, officials with knowledge of the matter say. The city during those discussions said it backed the finance firm, essentially guaranteeing the debt, and helped the company restructure its assets to entice investors to lend more.

Borrowing by firms like Wuhan Urban is a big reason China’s debt load is expanding. The International Monetary Fund says China’s debt is growing more rapidly than debt in Japan, South Korea and the U.S. did before they tumbled into deep recessions. Local-government borrowing is responsible for one-fourth of the buildup in China’s overall domestic debt since 2008.

Beijing in early December took a step to rein in rampant borrowing by local-government firms.China’s clearing agency for bonds surprised the market on Dec. 8 with new rules to prohibit investors from using low-grade debt to borrow cash. The order contributed to a selloff in mainland-Chinese securities ranging from government bonds to stocks, as investors sold liquid assets—including bonds from local-government financing companies—to raise cash. China’s markets have since rebounded but remained volatile.

The price of a 1 billion yuan Wuhan Urban bond tumbled as much as 2% after that move while investors pushed up the bond’s yield to compensate for greater risks, according to bond traders. Prices of the bond remained flat so far this month.

“When it comes to raising funds for the purpose of developing the city, we leave no stone unturned,” Wuhan Urban said in a July report. Press officials at the company and the Wuhan government decline to comment. The mayor didn’t respond to inquiries.

Even before its latest step, Beijing had put forward plans to slow local-borrowing growth. But China’s local governments have a surprising ability to resist policies. Another central-government priority—reducing excess production in steel, cement and other industries—has foundered due to local opposition.

“The guys running local government financing operations won’t roll over and die,” says Fraser Howie, co-author of “Red Capitalism,” a study of China’s financial system. “These companies take on a life of their own.”

Officials in China’s Finance Ministry declined to comment other than to refer to its recent decree asking local governments to audit their debt and to report results to the Ministry this month. The central government has said publicly that local-debt problems are manageable.

Since the mid-1990s, after some local governments went on borrowing binges to build hotels and golf courses, the central government has banned city halls from selling bonds or borrowing directly from banks. Instead, localities borrow indirectly through so-called local-government-financing vehicles. 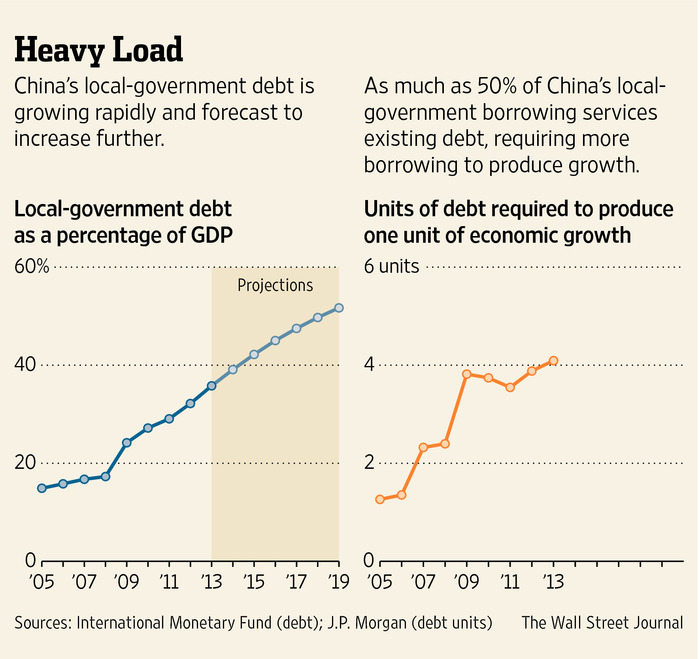 These entities raise money for local governments to fund roads, subways, airports, housing sites and other projects. Local governments implicitly guarantee the debt, helping the financing firms borrow no matter whether projects make sense. PRC Macro Advisors, a market-analysis firm in Hong Kong, estimates about half of new debt issued by the financing vehicles goes to roll over existing debt.

Roughly 8,000 local-government-financing firms across China are responsible for the rapid development of cities but also the glut of housing, industrial parks and other projects economists and officials say threaten China’s economic health. “If you’re building projects that can’t cover their cost, you’re spending money on keeping them going,” says Mr. Howie. “Some hospital somewhere isn’t being built; some small company isn’t getting money.”

In Bozhou, an eastern city of 470,000 people, the government’s main financing company, Bozhou Construction Investment Group, raised 1.8 billion yuan from bond sales in May to help renovate shantytowns and build roads and bridges.

The money isn’t sufficient to fund Bozhou’s dreams of becoming a major tourist center. The first of the new construction, a commercial area where city hall is located, is ringed by empty roads and buildings. The city figures it needs 5.2 billion yuan more to complete the district and other projects.

Bozhou, like many cities, is helping dress up its financing company so it can borrow more. In June, it merged Bozhou Construction with two other financing firms and renamed it Jian’an Holding Co. “The goal is to combine the fire power of the companies so that the rebranded company can borrow more from the capital markets,” says a Bozhou official with knowledge of the restructuring efforts.

A Bozhou-city press official referred questions to Jian’an Holdings, where a press official says the firm is “in transition,” declining to comment further.

Early in 2014, China’s premier and central-bank officials made clear that Beijing might allow some defaults, to chasten lenders and reduce credit growth. But as China’s economic growth fell below Beijing’s 7.5% target, willingness to allow defaults evaporated, say Chinese officials and economists.

“It’s the Japan syndrome,” says Fred Hu, chairman of Primavera Capital, a Beijing private-equity firm. “You keep pushing off problems. That creates a crisis, but a slow-motion crisis.”

In Wuhan, population eight million, city officials tout plans to spend 800 billion yuan between 2012 and 2016 to make the city a computer back office for the financial sector and to strengthen its position as a transportation hub.

Among projects under development: six subway lines, three bridges across the Yangtze and a new airport. Most of Wuhan’s ongoing and planned projects are funded by debt raised by Wuhan Urban. A 2013 report by China’s Finance Ministry criticized Wuhan for its debt run-up. 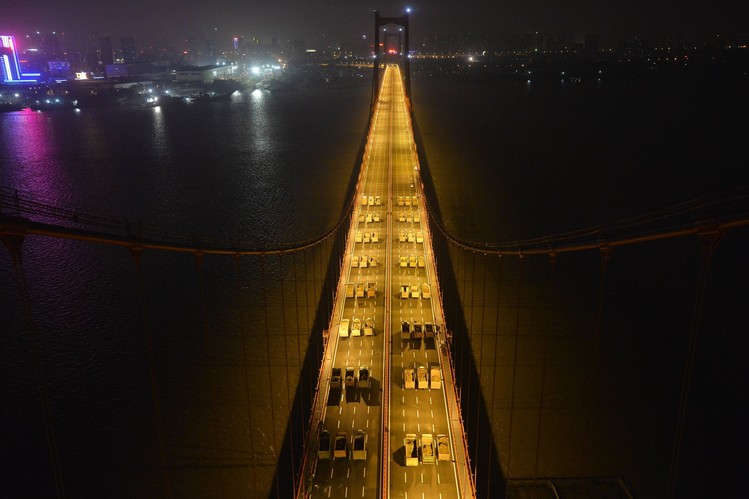 ENLARGE
Wuhan, China, where trucks test a newly built bridge over the Yangtze river, has used a local-government financing firm to borrow money the city is using to strengthen its position as a transportation and computing hub. Published Credit: Reuters PHOTO:REUTERS

According to the report, reviewed by The Wall Street Journal, the city heavily relies on land-sales revenues to repay debt. That is a dicey prospect, given rising public anger over land requisitions and a housing glut that is causing developers to cut back. “The city government faces very big risks associated with debt repayment due to the uncertain nature of land sales,” the report said.

So the city government gave Wuhan Urban a makeover. It injected funds into one of the company’s listed units through an equity swap, helping the unit get regulatory approval in May to issue up to 1 billion yuan in bonds. China Credit restored the company’s previous credit rating.

“Overall, we believe there is a high likelihood that the city government will step in should the company run into any debt-repayment crisis,” says China Credit analyst Huo Zhihui.

Ding Bokang, chairman of Zenith Group, a Chinese investment bank that consults local governments on debt, says he is skeptical of such restructurings. “It’s just a way for local governments to keep borrowing.”

—Wynne Wang contributed to this article.