How Red Capitalists Keep Stock Prices From Crashing—–940 Firms Suspend Trading In Their Own Shares!

Central banks globally have blown the biggest bubble ever in the wake of the 2008 crash. We have only just begun to see the carnage that is coming.

That carnage started in China and it’s going to spread.

The two pertinent questions now are “How fast?” and “Where next?”

I don’t have the answer to those questions. Nor does anyone else. What I do know is attempts to stop bubbles from bursting don’t work. Indeed, they only make matters worse.

Bloomberg has an interesting graph of China’s Market and Policy Timeline. 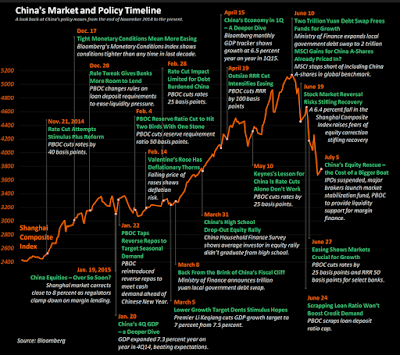 In an absurd attempt to maintain GDP Growth estimates that no one in their right mind believes possible, here are some key actions that China took.

Hundreds of Chinese companies have halted trading in their shares as Beijing struggles to insulate the economy from the country’s steepest equity decline in more than two decades.

Another 173 firms listed in Shanghai and Shenzhen announced trading suspensions after the market closed on Tuesday, bringing the total to around 940, or more than a third of all listed firms on the two exchanges.

Beijing has taken steps to keep stocks on China’s two main indices afloat, including direct purchases of large-cap companies, a halt to initial public offerings and a cut to trading fees. But so far its efforts have failed to staunch concerns.

Haitong Securities said late on Monday it would allocate Rmb15bn ($2.4bn) to tracker funds to help “maintain stable development” of the equity market. That followed a vow by 21 securities brokerages at the weekend to use their own capital to buy shares.

On the absurd theory that if you don’t talk about it, the problem does not exist, China’s sensors stepped into the act.

“One local reporter, who did not want to be named, said the government had banned local media from using the terms ‘equity disaster’ and ‘rescue the market’ in their reports on the stock market.”

In spite of this plunge, he Shenzhen index is still up about 36 per cent for the year.

Margin speculation and loose money to spur growth is what’s behind the bubble, but that does not stop idiot (no milder word will suffice) regulators from trying to stimulate margin.

The rout in China’s frothy stock markets since mid-June has been painful, to say the least. Between its peak on June 12 and July 2, the Shanghai Composite Index, which includes China’s largest companies, dropped 28%, wiping out $2.4 trillion in paper wealth.

Over the weekend, the People’s Bank of China announced a plan to inject funds into a state-owned entity that lends to brokerage firms. The country’s 21 brokerage firms also pledged 120 billion yuan to invest in stocks when the Shanghai Composite Index is below 4,500 (it closed at 3687 on July 2). Besides financing the bubble with new money, the Chinese government has suspended IPOs, cut trading fees, and relaxed requirements on margin loans (for example, Chinese retail investors can now use their apartments as collateral).

Unsurprisingly, the performance of the stock market has been made a barometer of the popularity of the current regime. The head of China Security Regulatory Commission not too long ago called the soaring market “a reform bull market,” suggesting that investors were giving a vote of confidence in the leadership’s promised reform programs.

Beijing has used a similar recipe for shoring up its debt-laden local governments. After the bond market rejected Beijing’s plan to float the debt issued by local governments earlier this year, Chinese leaders simply ordered state-owned banks to buy such debt, adding assets of dubious quality to their balance sheet.

Even after its recent plunge, Chinese stock prices are overvalued. The price-earnings (P/E) ratio of the Shanghai Composite Index is 23, compared with 12 for the Hong Kong’s Hang Shen Index, on which many of the same Chinese firms are listed. The Shenzhen Composite Index, which has lost a third of its value, has an average P/E ratio of 50. (However, a hefty portion of the reported earnings of Chinese firms is “investment income,” paper gains from their overvalued stock portfolios.) Efforts to support the market at high valuations are expensive and unlikely sustainable.

Beijing is trying to save the stock market bubble while three other bubbles have yet to deflate: real estate, local government debt, and manufacturing overcapacity. It’s possible that these bubbles will feed into each other, amplifying distortions and raising the final bill to clean up the mess.

Effort to Prevent Losses Must Fail

Resistance is futile. Regardless of efforts taken, loss prevention must fail.

The explanation is simple: The losses have already occurred, they simply have not been fully realized.

The same applies to Chinese GDP, purportedly growing at 7-10% for decades. High growth in emerging markets for a few years is reasonable, but not decades on end.

Building entire cities where no one lives, malls where no one shops, trains that no one uses all add to GDP because of the ridiculous definition that says all government spending adds to GDP.

Factor in malinvestment, future write-downs, pollution cleanup costs, etc., and the Chinese economy is hardly growing at all. Coupled with loose money, those are the conditions in which bubbles form.

Courtesy of the Fed and central bankers in general, a global equity day-of-reckoning is coming, and very few even see it.

In spite of all the messages you hear that “stocks are cheap”, the fact remains stocks are not cheap.

Central banks have still not admitted their role in the Great Financial Crisis, and they have done it again.

It’s too late to stop the carnage because the bubbles have already been blown. The open questions are as I stated at the top: “How Fast?” and “Where Next?”

No one has those answers, but huge pain is coming.