The “recovery” news in Spain keeps piling up. Via translation from El Economista, Government has already taken 37% of the total ‘pensions piggy bank’. If extractions continue at the current rate, the fund would be exhausted in 4 years.

The Government of Mariano Rajoy has released 24.65 billion euros of the Social Security Reserve Fund in less than two years. Such amount represents nearly 37% of the total 66.815 billion fund accumulation. That figure marks the highest cumulative piggy bank draw-down in history, following its commissioning in 2000 and after eleven years in which successive governments did not need to dip into it.

The situation changed dramatically with the height of the crisis. The current government has broken into the social security bank twelve times since 2012. The total amount withdrawn exceeds 24.6 billion euros while 54.69 billion remains.

This implies “at the current depletion rate, in a period of four years or so, the fund would be exhausted”.

Advice of the Day

I am sure glad no one sees a problem here. As we all know, problems vanish if you ignore them. It’s mind over matter. I learned that from former US secretary of treasury, Tim Geithner.

And as long as you are ignoring some problems, why not ignore all problems?

Instead, let’s focus on the dramatic improvement of Spain’s unemployment rate.

In a few years, at the current rate of progress, Spain’s unemployment rate may be back to a mere 21% or so. Isn’t that something to be proud of?

I sure would think so. But will there be anything left in the piggy bank? 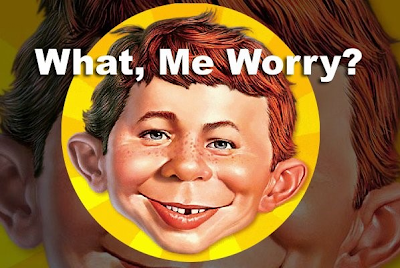 To all you naysayer pessimists who may be shocked by the above, please consider this simple question: If Social Security bankruptcy doesn’t bother the US, why should it bother Spain or any other country?

Far be it from me, Mish the eternal optimist, to be any sort of worrywart, but your answer must take into account one additional question: Who controls the printing press in the US and who controls the press in Spain?