How The Fed and Most Economists Ignore Inflation, And Why That Means Big Trouble

The headline CPI numbers are finally starting to hit or exceed the Fed’s target, coming in at a seasonally finagled rate of +0.2% for both May and June. CPI understates actual inflation, and that plays havoc with other economic data. With the Fed focused on bad data, it has had the excuse to continue ZIRP in a futile attempt to increase consumer prices.

The BLS suppresses CPI by understating housing expense, using a ginned down measure called Owner’s Equivalent Rent (OER) instead of actual market rent or, heaven forbid, actual house prices. In 2016 they have been inflating by around 5% per year, depending on the measure. The rate was even higher than that in the years between 2012 and 2015, but the affordability issue is beginning to cut into that. The result is that CPI has been understated by about 1% per year in recent years.

They can’t keep suppressing the impact of housing forever. Eventually rising housing costs “leak” into other costs. Given this suppression and lag we might guess that CPI will begin to accelerate and far outstrip the Fed’s 2% target rate “for a considerable period.” The Fed will need to play catch up on raising the Fed Funds rate as the CPI heats up. So let’s dig a little deeper and see just how much inflation the Fed missed by both ignoring housing inflation. This chart illustrates. 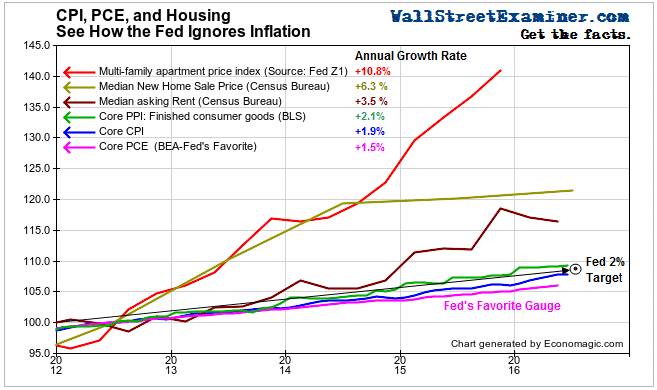 The Fed first announced its 2% “inflation” target in early 2012. The chart depicts the level of various housing price measures where the average level in 2012 is indexed at 100.  The Fed wasn’t really measuring inflation. It was watching the PCE. That’s a number that the BEA manufactures to deflate GDP. It’s even more suppressed than BLS’s CPI as you can see on the chart. Both are measures of arbitrary baskets of consumption goods. Asset prices, such as housing, are either excluded or suppressed. The rationale is that your house isn’t a consumption good, it’s an asset. Assets don’t inflate, they “appreciate.”

What the difference is between inflation and “appreciation” only central bankers and economists can appreciate. I like to call a spade a spade. Assets inflate just like consumption goods. The idea that asset prices should be excluded from any measure of inflation is an artifact of the CPI’s original purpose. The purpose was to index government contracts, salaries, and benefits to the “cost of living,” so that payees would receive reasonable adjustments for rising costs. In 1982 the government was forced to eliminate housing costs from that measure because rapidly inflating house prices were causing the Federal Government’s expenditures to increase faster than revenues. So they simply stopped counting housing prices and substituted OER, a phony measure of rent which almost always understates actual housing inflation.

A problem arises with using understated measures of inflation to calculate real GDP growth. For example, if the nominal value of the production of new housing is deflated by the PCE at 1.5%, that will grossly overstate its real value as a contribution to GDP. Housing inflation, even conservatively, has been running at 3.5% since 2012. Multifamily apartment prices have been running away even faster. The result is substantial overstatement of real housing value in GDP every year. The same issue applies to a lesser or greater extent to most components of real GDP. When the BEA tells us that real GDP growth is 2-3%, using a PCE of 1.5%, it probably overstates growth by at least 0.5% and possibly more.

The rationale for ZIRP was at best questionable. By failing to take into account, deliberately or not, the asset inflation that QE and ZIRP caused, the Fed kept the policy in place for far too long. As a result, we once again face the age old problem of the Fed being behind the curve.  As the Fed plays catch up, it will raise interest rates in an economy that it is much weaker than it appears based on government statistics.

As CPI begins to catch up with real inflation, the years ahead shape up as something similar to the late 1960s through 1970s. That was the era where the US had high inflation, rising interest rates, and slow economic growth interspersed with severe recessions, or what came to be known as “stagflation.” It was an era where Americans had lost faith in government, just like today. It was a terrible environment for investors, in both stocks and bonds.

Source: The Wall Street Examiner. Liquidity moves markets! Click here to learn how you can follow the money.