The actual, not seasonally adjusted number of contracts for the sales of existing homes rose by 33% in March versus the February level. This is a better than the prior 8 year average gain for the month of March of 27%. However, it leaves the total number of contracts still 7% below last year’s March level. 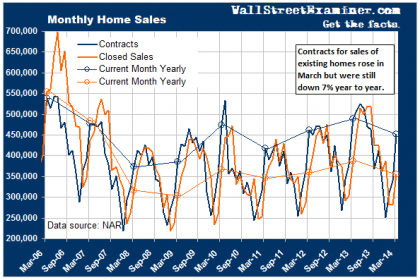 Earlier the NAR reported March listing inventory at 1.99 million units in March. That’s up from 1.93 million in March 2013, but still extremely tight historically. Over the past decade, prior to 2012, March inventory was never below 3 million units. The fact that few owners are willing to put homes on the market causes prices to rise, even with historically depressed levels of demand. 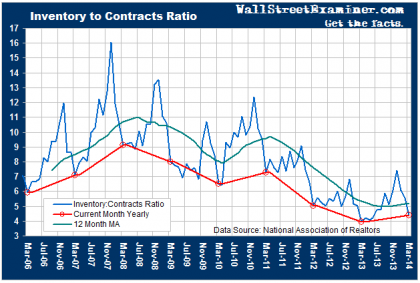 The result is that prices of skyrocketing even with weak demand as illustrated by real time contract data on existing and new home sales. Online realty Redfin.com releases a monthly report on current contract sale prices for the 19 large metropolitan areas in which they have offices. These are the premier markets in the US, therefore the data represents the trend of stronger markets. The data is widely scattered between eastern and western US. It showed prices gaining 9.9% year over year in March. 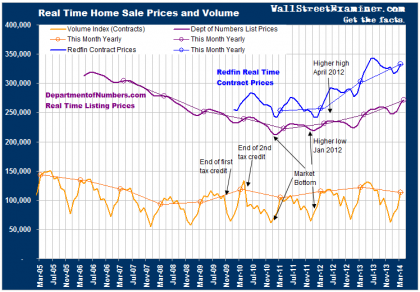 Last week the Commerce Department released its survey data on new home sales. This is based on current contract data, therefore it is also a good, near real time indicator of the trend. New home sales are down more than 70% from peak bubble levels and remain near the lows recorded at the bottom of the crash in 2009-2011. 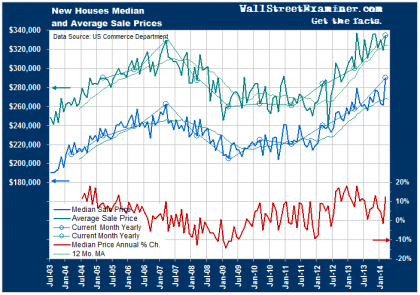 The US housing market’s raging inflation without recovery of demand epitomizes the extreme distortions caused by the Fed’s policies of QE and ZIRP.