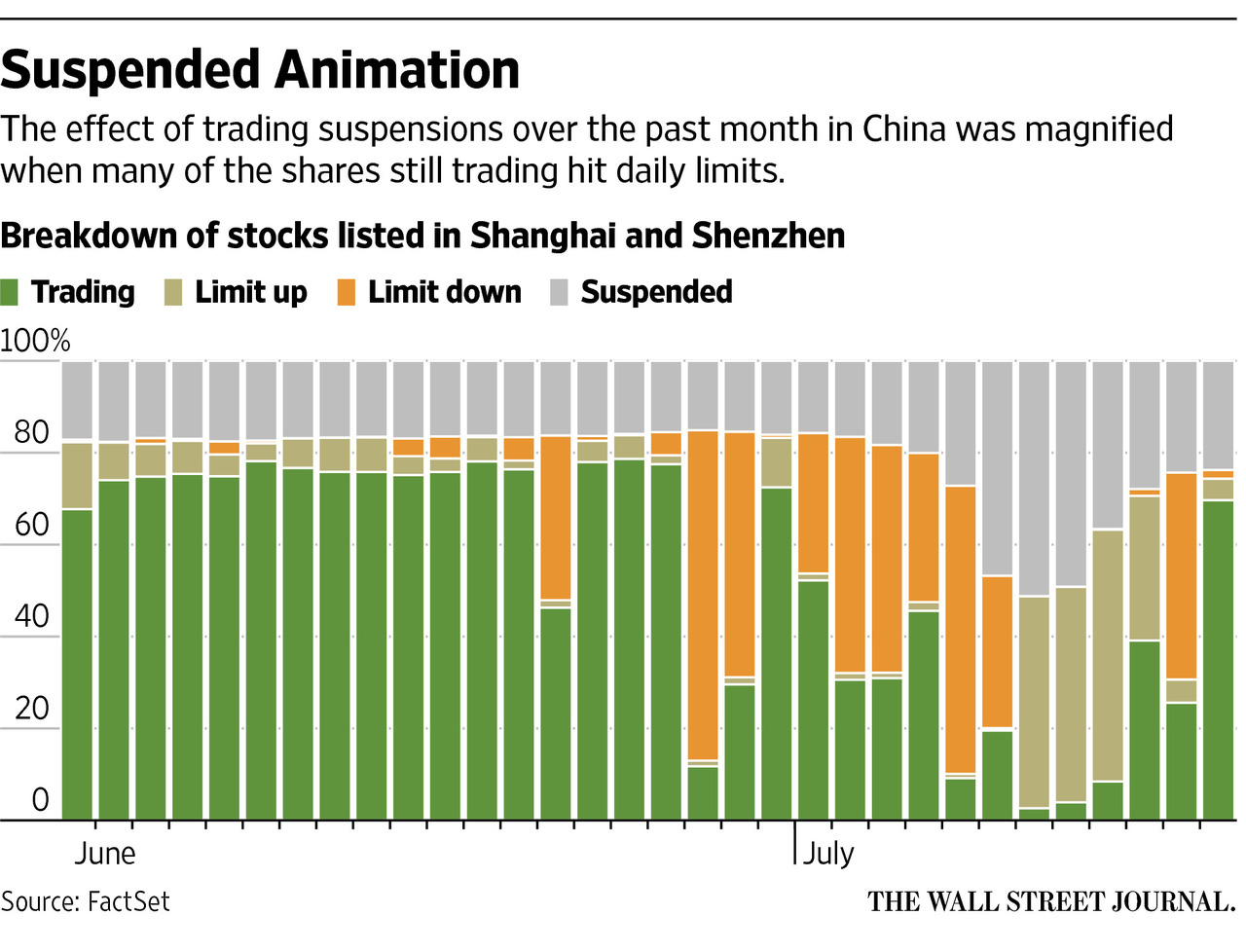 China may have the world’s second-biggest stock market after the U.S., but at one point during a roller-coaster ride for investors this month only 93 of 2,879 listed companies were freely tradable—about the same number as trade in Oman.

On July 9, a day after the market hit bottom, just 3.2% of Chinese-listed companies could be traded normally, according to an analysis by The Wall Street Journal using FactSet data. The rest of the shares on the Shenzhen and Shanghai stock exchanges either were suspended or hit their daily limit. China’s market rules prevent share prices from moving freely once they rise or fall by 10%.

The findings are supported by an independent analysis by Gottex Fund Management, done at the behest of the Journal.

The daily-limit rule affected thousands of companies as the Shanghai market slid 32% in less than four weeks through the July 8 bottom, then rebounded 15% since then, while the smaller Shenzhen market slid 40% and then rebounded 20.2%—crossing the 20% threshold that defines a bull market on Tuesday.

Most markets, including the New York Stock Exchange, employ “circuit breakers” to prevent wild swings in share prices over a short period, which can happen as a result of rapid-fire trading algorithms or human error. But in China, the limit rule was impeding trading of many companies at the same time investors were locked out of hundreds more that used an exchange rule allowing them to apply for trading halts ahead of major news that might cause a drastic price fluctuation.

At the height of suspensions, 51% had taken themselves off the market, according to the Journal’s analysis. An additional 46% were halted because of limit rules.

As the selloff started to turn on July 9, trading volume declined sharply in Shenzhen, after trading in the majority of stocks had been halted. However, in the larger Shanghai market, shares still were trading at the same frenzied pace seen before the selling started. Investors were chasing an ever-dwindling pool of securities, which only got worse as more stocks hit limit up.

Fund managers, many of whom base their portfolios off Chinese stock indexes, were frustrated by the limited trading, which left them struggling to rebalance their holdings to account for the selloff and subsequent rally. Some complained that China’s exchanges acquiesced too easily to company suspension requests and then slowed the pace of resumption to avoid a sudden influx of shares. Others said they were frustrated by the lack of transparency.

“In my experience, this was the most brazen act of a government to interfere in its equity markets,” said Timothy Atwill, head of investment strategy at Parametric, a unit of asset manager Eaton Vance Corp.

Peter Liao, a portfolio manager at New York-based Van Eck Global, said most of his orders weren’t executed because the stock had risen or fallen by the limit. Van Eck Global, which manages two exchange-traded funds in China valued at a combined $150 million, is one of a handful of U.S.-based firms with holdings in small and midsize Chinese companies.

The timing of the voluntary trading halts—in the midst of the selloff—was perceived by some investors as far too convenient for the companies, letting them avoid further hemorrhaging.

The reasons companies gave for suspending their own stocks ranged from a “major event discussion” to “asset restructuring.” Since the selloff ended, many companies have resumed trading. On Tuesday, trading was suspended in 547 companies, close to the 474 suspended when Chinese markets hit their previous highs on June 12, according to FactSet data.

The Journal called 40 companies that had suspended their own shares during market turmoil. Six responded, and all said the decision was unrelated to the turbulence.

Haining China Leather Market Co., one of the Shenzhen-listed companies held by Van Eck Global, suspended trading on July 9, at which point its share price was down 52% from the previous month. The company cited a proposed acquisition as the reason for requesting the suspension. It was “pure coincidence” that it came during the market plunge, company secretary Sun Yumin said, although he said a minority of investors had called to ask the company to request a suspension because of price volatility.

Van Eck Global’s Mr. Liao said Chinese companies can “tick a box” in making the request, choosing from among 10 to 15 reasons for suspending their shares.

As the market began to turn around on the back of government money unleashed to prop up stocks, the problem of trading limits compounded the share suspensions. On July 13, three trading days after the market bottomed, as many as 54% of stocks hit daily trading limits.

While shares that have hit their limits still can change hands at the price they last reached, it isn’t always easy to find someone to take the other side of the transaction. The prospective buyer of a stock that fell 10%, for example, would be tempted to wait in anticipation of a lower price the next day.

The evaporation of tradable stocks caught investors more off-guard than the price slump. Jonathan Krane, founder and chief executive officer at New York-based KraneShares, which manages an exchange-traded fund that includes small and midsize Chinese-listed companies, had to scramble to keep his portfolio running. Mr. Krane said he was concerned about running afoul of U.S. rules that require funds to have a certain amount of liquid stocks every day. Fortunately, the number of suspensions and share halts declined over the next few days. “If this had been prolonged, there would have been issues,” he said.

Although both KraneShares and Van Eck Global said they remained upbeat about the Chinese market, others said they were spooked by the moves, with the suspensions proving particularly unpopular.

Investors who had put money into Chinese companies via Stock Connect, a link that allows investors in Hong Kong and Shanghai to invest in each other’s markets, withdrew funds for 11 of the past 12 trading days, pulling a net 39.8 billion yuan ($6.41 billion) out of Shanghai.

Columbia Threadneedle Investments, which manages $506 billion in assets, said it is reviewing its exposure to Chinese-listed companies, or A-shares, in light of the government’s intervention. “What do you invest in a market that’s not clearing properly?” said Colin Moore, Columbia Threadneedle’s global chief investment officer.

For Parametric, Mr. Atwill said the suspensions and halts sapped the firm’s desire to continue testing Stock Connect, which opened in November. Instead, it will refocus its interest on Hong Kong-listed H-shares, he said. Beijing had hoped the trading link would attract more institutional investors to mainland markets.

As for Haining China Leather, it resumed trading last week after being suspended three days. It said it had failed to reach an agreement on the price of its proposed acquisition, without giving further details. Its shares immediately hit the upper trading limit. On Monday, they closed 29% above the suspension price.

Source: China’s Market Plunge: Where Only 3% of Firms Could Trade – WSJ