If It Owns a Well or a Mine, It’s Probably in Trouble

By Clifford Kraus & Ian Austen at The New York Times

The pain among energy and mining producers worsened again on Tuesday, as one of the industry’s largest players cut its work force by nearly two-thirds and Chinese trade data amplified concerns about the country’s appetite for commodities.

The full extent of the shakeout will depend on whether commodities prices have further to fall. And the outlook is shaky, with a swirl of forces battering the markets.

The world’s biggest buyer of commodities, China, has pulled back sharply during its economic slowdown. But the world is dealing with gluts in oil, gas, copper and even some grains.

“The world of commodities has been turned upside down,” said Daniel Yergin, the energy historian and vice chairman of IHS, a consultant firm. “Instead of tight supply and strong demand, we have tepid demand and oversupply and overcapacity for commodity production. It’s the end of an era that is not going to come back soon.”

The pressure on prices has been significant.

Prices for iron ore, the crucial steelmaking ingredient, have fallen by about 40 percent this year. The Brent crude oil benchmark is now hovering around $40 a barrel, down from more than a $110 since the summer of 2014.

Companies are caught in the downdraft.

A number of commodity-related businesses have either declared bankruptcy or fallen behind in their debt payments. Even more common are the cutbacks. Nearly 1,200 oil rigs, or two-thirds of the American total, have been decommissioned since late last year. More than 250,000 workers in the oil and gas industry worldwide have been laid off, with more than a third coming in the United States.

The international mining company Anglo American is pulling back broadly, with a goal to reduce the company’s size by 60 percent. Along with the layoffs announced on Tuesday, the company is suspending its dividend, halving its business units, as well as unloading mines and smelters.

The situation has darkened in recent months.

In July, the company outlined plans to cut 53,000 jobs after reporting a loss of $3 billion for the first half of the year. Now, Anglo American plans to reduce its current work force of 135,000, to 50,000 employees.

“Quite frankly we didn’t expect the commodity price rout to be so dramatic and in all likelihood the next six months are going to be even tougher,” Mark Cutifani, the company’s chief executive, said at an investors’ conference on Tuesday. “We have pulled costs out of the business, but we need to do more because prices continue to deteriorate.”

Between 2000 and last year, companies invested hundreds of billions of dollars to expand their production capacity to satisfy China in a period of rapid economic expansion. Much of the corporate growth was fueled by debt.

But the situation has proved unsustainable as demand has waned. Chinese copper imports are down nearly 3 percent from last year, while imports of steel products are down by more than 12 percent. The country’s crude oil and iron ore imports are still up, but by rates that are slowing from previous years.

After recovering from the financial crisis, commodities prices have fallen sharply since last year. 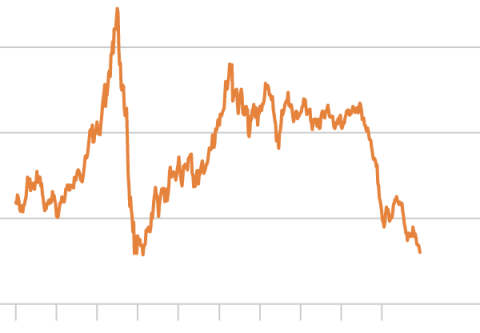 The economy’s slowing growth rate is adding to the uncertainty. China reported on Tuesday that exports, the country’s engine of growth, slipped 6.8 percent in November, compared with the same month a year ago. Imports were also weak, although the rate of decline was lower than in the previous month.

The weakening Chinese demand is hurting prices while production is overwhelming markets.

Many international oil projects have been canceled and production should fall more rapidly next year. But it probably won’t be quickly enough to stabilize prices. That is because companies are getting more production out of their investments as efficiency has improved. And some need to keep producing to keep up with their debt payments.

The commodity fallout has been global.

The Swiss company Glencore is scrambling to reduce its $30 billion debt by a third before the end of 2016 by slashing its copper-mining operations in Zambia and the Democratic Republic of Congo and selling much of its agricultural business. Kinder Morgan, the North American pipeline company, cut its dividend on Tuesday afternoon, prompting a sell-off in the stock after hours.

There have already been about 40 Chapter 11 bankruptcy filings by North American oil and gas producers this year, accounting for roughly $15 billion in secured and unsecured debt. And energy experts predict more bankruptcies in 2016 if oil prices remain below $40 a barrel, or even below $50 a barrel.

When one company topples, it reverberates broadly.

On Monday, Energy & Exploration Partners, a Fort Worth oil and gas driller, filed for Chapter 11 protection. In the bankruptcy, it listed debt of more than $1 billion owed to several service companies, including units of Schlumberger and Baker Hughes.

For some players, the mess creates opportunity. Scott Sheffield, chief executive of Pioneer Natural Resources, a major Texas oil company, predicts a wave of consolidations and corporate shake-ups because of financial strain from the commodity price collapse.

“There is about $150 billion of private equity out there looking for deals in the U.S.,” he said.

Others are facing a period of prolonged problems.

Some energy experts are even beginning to express concerns that sovereign wealth funds of Saudi Arabia and other wealthy Persian Gulf and oil-producing countries will redeem their money from investment firms in the coming year to shore up their balance sheets. If they do, the moves could initiate more instability in global equity and debt markets.

Since he became chief executive in 2013, Mr. Cutifani said, not a single month has passed during which any of the products that Anglo American mines has risen in price. When he took the job, Mr. Cutifani signaled that the free-spending ways of the commodity price supercycle had ended by selling the corporate jet.

Now, everything is getting a second look. Anglo American will close its London head office and share space in the city with the headquarters of De Beers, its diamond mining unit. Over all, Anglo American plans to reduce operating costs over the coming year by $1.1 billion and cut capital spending by an additional $1 billion in the same period.

The company intends to focus operation in three areas: the diamond operations of De Beers; industrial metals like copper; and bulk commodities like coal. Details about the job cuts will not be announced until February, but it appears that they will probably focus on the firm’s bulk commodities operations.

Mr. Cutifani said that Anglo American would simply shut money-losing mines rather than sell them at heavily discounted prices, although he did not entirely rule out asset sales. The nickel, coal and iron ore mines, he said, will have to show that they can reduce costs sufficiently to generate cash.

“If not, they won’t be in the portfolio, it’s as simple as that,” he said. “In this sort of environment, nothing can be considered business as usual.”

Source: If It Owns a Well or a Mine, It’s Probably in Trouble – The New York Times