By LOUISE RADNOFSKY at The Wall Street Journal

WASHINGTON—Growth in national health spending, which had dropped to historic lows in recent years, has snapped back and is set to continue at a faster pace over the next decade, federal actuaries said Tuesday.

The return to bigger growth is a result of expanded insurance coverage under the 2010 health law, a revived economy and crunchtime as Medicare’s baby-boom beneficiaries enter their 70s.

American spending on all health care grew 5.5% in 2014 from the previous year and will grow 5.3% this year, according to a report from actuaries at the Centers for Medicare and Medicaid Servicespublished in the journal Health Affairs. In the years through 2024, spending growth is expected to average 5.8%, peaking at 6.3% in 2020.

The jump comes after five consecutive years of average spending growth of less than 4% annually—a rate touted by theObama administration as the lowest since the government began tracking health spending in the 1960s and a sign that the health law’s Medicare provisions were helping rein in health costs.

But the sharper increase had been foreseen last year by the actuaries at the Centers for Medicare and Medicaid Services, who warned of a 5.6% increase in 2014, 4.9% growth in 2015, and average 5.7% growth through 2024. The actuaries again Tuesday pointed to the stronger economy and aging population as the main factors in shaping Medicare’s future spending.

Prescription-drug spending, long a target of warnings from the insurance industry, drew particular attention from the actuaries, who pointed to a big rise in spending growth there as costly new specialty drugs such as Sovaldi, for hepatitis C, came on the market in 2014. Spending growth on pharmaceutical products jumped by 12.6% in 2014, up from 2.5% in 2013.

The report noted that growth is still slower than in the three decades before the economic downturn. Spending might have accelerated further but for the fact that consumers are paying a greater share of their medical bills and reining in their use of services, the actuaries said. One in three Americans said they or a family member delayed medical care because of costs in 2014, according to a report late last year by survey company Gallup.

The consequences are also significant for Washington and state governments, which by 2024 will be responsible for paying around 47% of the nation’s health bills, up from 43% in 2013.

In all, health care will comprise about a fifth of the U.S. economy by 2024, and the growth rate will exceed the expected average growth in gross domestic product by 1.1 percentage points. 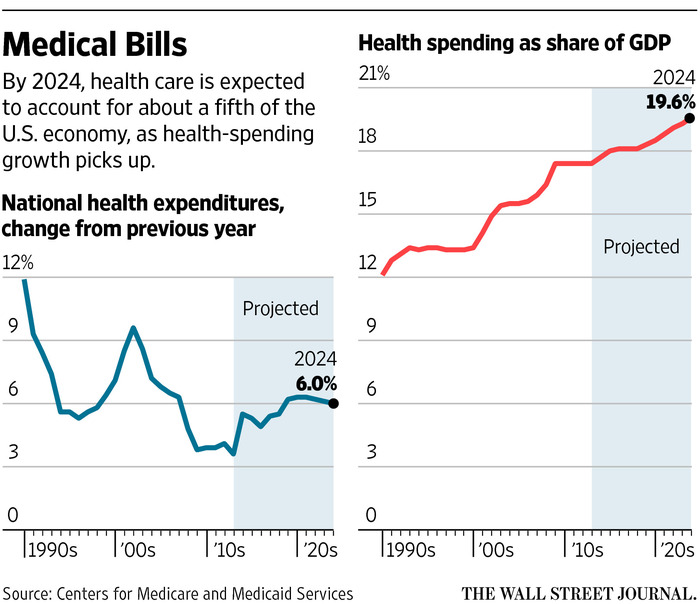 The actuaries pointed to the rising numbers of people who have health coverage under the Affordable Care Act, projecting that around 8.4 million fewer Americans were uninsured in 2014 than in 2013 and noting their increased use of medical services.

Medicaid, the federal-state program for low-income Americans, was expanded under the health law in most of the country. The report projected 78.1 million people will be enrolled by 2024, continuing to outstrip Medicare, the federal insurance program for people 65 and older, which will have 70.3 million enrollees. Those Medicare beneficiaries will become increasingly expensive, however, as they age and seek more care, from hospitals in particular.

Their costs could trigger action from the Independent Payment Advisory Board, created by the health law.

The 15-member board—derided as a “death panel” during the debate over the law—doesn’t currently exist, as the White House hasn’t nominated anyone for it, and Republicans have explicitly refused to make recommendations. The board is meant to recommend spending cuts if Medicare’s cost growth exceeds certain targets, which actuaries say could occur around 2017 under these projections, requiring action in 2018 and implementation in 2019.

If the board is convened, it would be barred from suggesting specific changes to Medicare such as rationing care, increasing taxes, changing Medicare benefits or eligibility, or increasing beneficiary premiums and cost-sharing requirements.