By LOUISE RADNOFSKY at The Wall Street Journal

Major insurers in some states are proposing hefty rate boosts for plans sold under the federal health law, setting the stage for an intense debate this summer over the law’s impact.

In New Mexico, market leader Health Care Service Corp. is asking for an average jump of 51.6% in premiums for 2016. The biggest insurer in Tennessee, BlueCross BlueShield of Tennessee, has requested an average 36.3% increase. In Maryland, market leader CareFirst BlueCross BlueShield wants to raise rates 30.4% across its products. Moda Health, the largest insurer on the Oregon health exchange, seeks an average boost of around 25%.

All of them cite high medical costs incurred by people newly enrolled under the Affordable Care Act.

Under that law, insurers file proposed rates to their local regulator and, in most cases, to the federal government. Some states have begun making the filings public, as they prepare to review the requests in coming weeks. The federal government is due to release its rate filings in early June.

Insurance regulators in many states can force carriers to scale back requests they can’t justify. The Obama administration can ask insurers seeking increases of 10% or more to explain themselves, but cannot force them to cut rates. Rates will become final by the fall.

Consumer groups are demanding federal and state officials put premiums requests under the microscope this year.

What has been your experience with the Obama health law? What do you think of the costs and coverage? Are you happy with your premiums? Share your story here.

“We are really wanting to see very vigorous scrutiny,” said Cheryl Fish-Parcham, director of the private insurance program at Families USA, a group that advocates for the health law. Her group wants regulators and the public to debate insurers’ assumptions about rates and look for ways they could save money.

Insurers say their proposed rates reflect the revenue they need to pay claims, now that they have had time to analyze their experience with the law’s requirement that they offer the same rates to everyone—regardless of medical history.

Health-cost growth has slowed to historic lows in recent years, a fact consumer groups are expected to bring up during rate-review debates. Insurers say they face significant pent-up demand for health care from the newly enrolled, including for expensive drugs.

“This year, health plans have a full year of claims data to understand the health needs of the [health insurance] exchange population, and these enrollees are generally older and often managing multiple chronic conditions,” said Clare Krusing, a spokeswoman for America’s Health Insurance Plans, an industry group. “Premiums reflect the rising cost of providing care to individuals and families, and the explosion in prescription and specialty drug prices is a significant factor.” 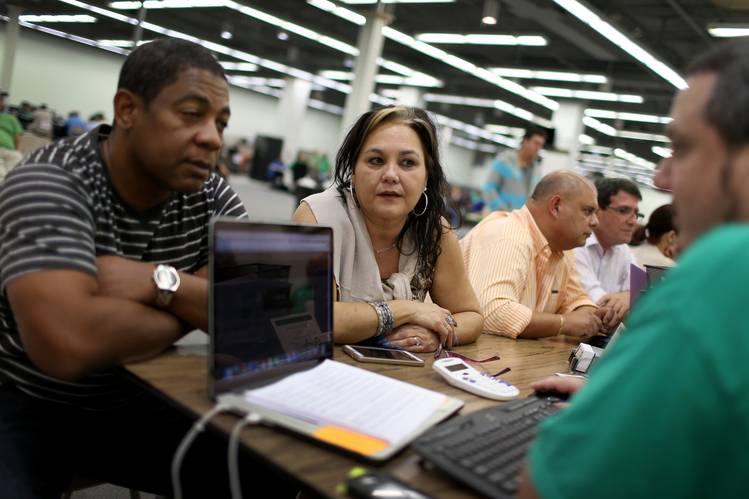 Customers discuss plans available under the Affordable Care Act with an agent from Sunshine Life and Health Advisors at the Mall of the Americas in Miami in December.PHOTO: JOE RAEDLE/GETTY IMAGES

David Axene, a fellow at the Society of Actuaries, said some insurers were trying to catch up with the impact of drugs such as Sovaldi, a pricey pill that is first in a new generation of hepatitis C therapies.

Mr. Axene, who helps many health plans set rates but didn’t work with the big plans in Maryland, New Mexico, Oregon or Tennessee, said insurers knew they would have to have “extreme evidence” to support their requests for the year ahead. “Somebody sincerely believed that they needed it,” he said.

In some of the dozen states where The Wall Street Journal reviewed filings that are public, the biggest insurers are seeking significant but less eye-popping increases. Anthem Inc., in Virginia, wants an average increase of 13.2%. Blue Care Network, part of Blue Cross Blue Shield of Michigan, applied for a 10% average increase.

In Washington state and Vermont, the market leaders have sought relatively modest average increases, akin to those proposed last year, of 9.6% and 8.4%, respectively. In Indiana and Connecticut, the leading plans want 3.8% and 2% boosts. So far, Maine is the only state where the market leader proposed keeping rates generally flat.

The 2010 health law made sweeping changes to the way medical insurance is sold to consumers who don’t get coverage through jobs or a government program such as Medicare. The federal government subsidizes premiums for some consumers, based on income, and the validity of those subsidies in most of the country is the subject of a lawsuit the Supreme Court is expected to decide in late June.

The filings from insurers are based on the assumption that those subsidies remain in place.

Insurance premiums have become a top issue for consumers and politicians as they evaluate how well the law is working. Obama administration officials weathered a storm as some younger, healthier consumers saw their premiums jump when the law rolled out, but were also able to point to modest premiums overall as insurers focused on other ways to keep costs down, such as narrow provider networks.

For 2015 insurance plans, when insurers had only a little information about the health of their new customers, big insurers tended to make increases of less than 10%, while smaller insurers tried offering lower rates to build market share.

BlueCross BlueShield of Tennessee, CareFirst in Maryland and Moda in Oregon all said high medical claims from plans they sold over insurance exchanges spurred their rate-increase requests.

The Tennessee insurer said it lost $141 million from exchange-sold plans, stemming largely from a small number of sick enrollees. “Our filing is planned to allow us to operate on at least a break-even basis for these plans, meaning that the rate would cover only medical services and expenses—with no profit margin for 2016,” said spokeswoman Mary Danielson. The plan’s lowest monthly premium for a midrange, or “silver,” plan for a 40-year-old nonsmoker in Nashville would rise to $287 in 2016 from $220.

Tennessee Insurance Commissioner Julie Mix McPeak said she would be “surprised if we settled on 36.3%” as requested for the Blue plans’ average rate increase, but a significant boost might be allowed. She said data her team examined reflected big medical-claim costs.

In Maryland, “premiums cannot be excessive but they cannot be too little,” said Insurance Commissioner Al Redmer. His predecessor rejected a similar 30% request from CareFirst last year, but allowed a 16% increase.

Moda Health said that with more than 100,000 individual members, it had the best data “on the care actually being received by these Oregonians. Our proposed rates reflect that.”

Under Moda’s proposal, a 40-year-old nonsmoker in Salem would pay $296 a month in 2016 for a silver plan, up from $245 a month this year. “It is a balance,” said Oregon Insurance Commissioner Laura Cali of her rate-review process.

Greg Thompson, a spokesman for Health Care Service Corp., the carrier seeking a 51.6% increase in New Mexico, said the proposed rates reflected high medical costs, and, like everyone else’s, were based on actuarial science. “There’s really no incentive for us to overprice,” he said.

New Mexico Insurance Commissioner John Franchini said insurers can revise their requests before June. He also has the power to reject rates.