Now that the Fed has gone and done what all the Fedheads had said that they would do, the question is what they really did.

Did they tighten credit?

Did they reduce the size of the Fed’s balance sheet?

Did they decrease the growth rate of the money supply?

Did they raise interest rates?

That last one may surprise you. But raising interest rates means raising banks costs of funds so that the banks will charge their customers higher rates. Even if you assume that that was the case with this move, in the early and mid stages of a credit tightening cycle such increases do nothing to reduce lending or curb speculative fervor. In fact, in an inflationary environment, raising rates normally even leads to increased lending, increased speculation, and increased inflation! All things that the Fed purportedly wants to curb.

If you don’t believe me, I can tell you that I’m old enough to have lived through just such a period as a young adult starting my career on Wall Street in the 1970s. More recently it happened in the Fed’s last tightening cycle from 2004 to 2006.  Greenspan raised the Fed Funds target from 1% to 5%. Annual CPI rose from 1.6% to a peak of 4.6% in September 2005, and stayed at 3.5% or higher until the end of the rate increase cycle.

The increase in lending rates was supposed to slow credit growth. What happened? It grew faster.  Loan growth was already red hot at near 7% at the beginning of the rate increases. By the end of 2005, loan growth was skyrocketing at an annual rate of more than 13%. We were in the midst of the greatest credit bubble in history. Finally, the S&P 500 was around 1125 at the beginning of the rate increase cycle in 2004. It rose to over 13oo in the middle of 2006, about a 16% increase.

So much for interest rate increases tightening credit, slowing speculation, or reducing inflation. In fact just the opposite occurred over that 2 year period.  We all remember the late Great Housing Bubble (not to be confused with the current great housing bubble- lower case). According to the FHFA, house prices inflated by an average 17% nationally during those 2 years.  And FHFA’s methodology suppresses the rate of increase. The hot bubble markets went up 25-30% per year!

In fact, rates never became punitive during the Great Housing Bubble, like they did under Paul Volcker in the early 1980s. In 2006, home prices were still rising at a rate well above the Fed Funds rate. The Bubble died of too much bad credit. The financial system crashed because it had fraudulently lent too much money under false pretenses. Once it became clear that too much bad debt had been created, the financial system collapsed. It wasn’t because of high interest rates.

So the idea that the Fed raising rates will reign in speculation, curtail lending and keep inflation in check is patently absurd. Raising rates without actually tightening credit, could do the exact opposite just as it has in the past. No two cycles are exactly alike, but if past is prologue, this rate cycle will cause an increase in the amount of speculative borrowing. It will increase speculation in housing and stocks. It will drive CPI higher at a faster rate than before.

I have shown in past posts how the CPI suppresses and understates the actual cost of living. It doesn’t even pretend to measure asset inflation. It excludes the actual rate of increase in house prices and replaces it with a phony measure called Owner’s Equivalent Rent (OER) that reflects only about 1/3 to 1/2 of the inflation rate of housing. Then it gives that a 41% weighting in Core CPI.

But the method used to construct OER assures that while it will always lag, it starts to reflect the increases that already happened within 18 months to 2 years. Thereafter OER will continue to rise at an increasing rate as it plays catch-up with reality. So you can bet that the recent larger increases in CPI are only the beginning. CPI increases are bound to accelerate in the next few months and years as they catch up with actual increases in living costs of around 4%.

Meanwhile, CPI has already been above the Fed’s 2% target since late in 2015. The Fed’s favorite measure of “not inflation” the Core PCE, continues to remain submerged well below 2%, although the headline number of +0.3% month to month in January was a warning shot that it too will start to catch up. The PPI for core finished consumer goods, which represent wholesale prices of consumer goods to retailers, have remained above 2% since 2014. To believe that CPI is less than that is to believe that retailers don’t pass on their cost increases. In fact, they usually do cost plus.

Our Flyover CPI, developed by David Stockman to represent the real cost of living to typical middle class households in the the US is now skyrocketing at a rate above 4%.  The Flyover CPI includes actual US average housing inflation and gives slightly greater weight to energy and medical costs than does the government’s CPI-U. The Flyover measure also includes Energy and Food, which the core CPI and PCE do not. So Flyover CPI took a big hit from the 2014-15 collapse in energy prices. But it came roaring back since then. This is the best measure of just how far behind the curve the Fed really is. 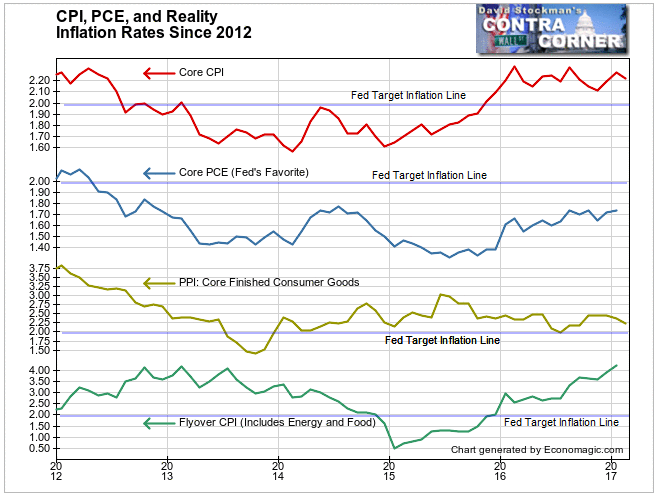 In reality the Fed hasn’t tightened at all. It has merely increased the Interest on Excess Reserves that it pays the banks. In other words, the Fed hasn’t been raising bank costs at all since it began this rate cycle. Au contraire. The Fed has been increasing the interest it pays on excess reserves (IOER). That’s the subsidy it pays to the banks for the couple trillion in reserve deposits that are at the Fed.

The Fed isn’t tightening. It’s easing. Official inflation measures will rise faster. Speculative lending won’t be curtailed, and unfortunately, the stock market blowoff may prove more persistent. Eventually that will only lead to a bigger more intractable collapse. Timing is the issue.

Gold traders today recognized the probability of this being the outcome of the Fed’s idiotic interest rate games. They drove the price of gold up by $21 on Wednesday.

I think they have it right.

Lee’s work combines in depth monetary and liquidity analysis with technical analysis of market price movements. He first reported in 2002 that Fed actions were driving US stock prices. He has tracked and reported on that relationship for his subscribers ever since. He has been reporting on gold prices and precious metals stock prices since 2000. He called the secular trend gold bottom in 2001. Follow Lee’s weekly market timing reports on gold, and trading recommendations on mining stocks and ETFs, in the Wall Street Examiner Pro Trader Precious Metals Updates. Try the service risk free for 90 days.