The stock market broke, but initial claims are still at record levels. This is how it has historically works as bubbles start to deflate. Employers are the last to get the news. But the very fact of their record long term ebullience was warning enough, as I have repeatedly chronicled here over the past year. For now, though they still haven’t gotten the message, and that means that things are likely to get much worse until the real cuts come and hit deep.

Actual initial unemployment claims counted by the 50 states totaled 230,493 last week, which is another record low for this calendar week. It continues a nearly uninterrupted string of record lows that began in September 2013. We have been able to see and track this trend because we focus on the trend of the actual data instead of the seasonally manipulated headline number expectations game favored by Wall Street and its Big Media subsidiaries. Facts tend to be more useful than the economic establishment’s favored fictitious numbers.

The Department of Labor (DoL) reports the unmanipulated numbers that state unemployment offices actually count and report each week. This week it said, “The advance number of actual initial claims under state programs, unadjusted, totaled 230,493 in the week ending August 29, an increase of 3,844 (or 1.7 percent) from the previous week. The seasonal factors had expected a decrease of 5,409 (or -2.4 percent) from the previous week. There were 249,780 initial claims in the comparable week in 2014. ” Below is a 10 year chart of the actual data.

You can see for yourself from the chart just how extraordinarily low the recent numbers have been.

When using actual data we want to see if there’s any evidence of trend change. Thus we look at how the current week compares with this week in prior years and whether there’s any sign of change in the trend. The actual change for the current week was an increase of 3,400 (rounded). This week of August is a swing week, sometimes with an increase in claims and sometimes with a decrease. The 10 year average for the week was a decrease of +1,300, but excluding 2008 when the economy was tanking the average would have been slightly positive. This year was unremarkable in that context but showed a hint of weakness versus 2014 (+800) and was significantly worse then 2013 (-10,200), which was the best performance of the past 10 years.

Week to week changes are noisy. The trend is what is important and it remains on track. Actual claims were 7.7% lower than the same week a year ago. Since 2010 the annual change rate has mostly fluctuated between -5% and -15%. This week’s data was within that range. There’s no sign yet of a significant uptick in the trend of firings and layoffs.

This data is consistent with the real time withholding tax data, which was very strong in the nonfarm payrolls survey week earlier in August. Both series suggest a robust August jobs number that should be stronger than the current Wall Street economists’ consensus guess of 217-223,000. We can never know if the seasonal adjustment problem will result in a reasonably reliable headline print on the BLS first guess release. That number will subsequently be revised 7 times over 5 years as they try to hone in on what really happened. The initial print should come in above expectations and if it does, the market will probably react adversely, as it assumes that the Fed will make its first perfunctory attempt at a little tightening. If the headline number doesn’t “beat” I would give the number crunchers and the market about an hour to figure that out and start reacting to the reevaluation. 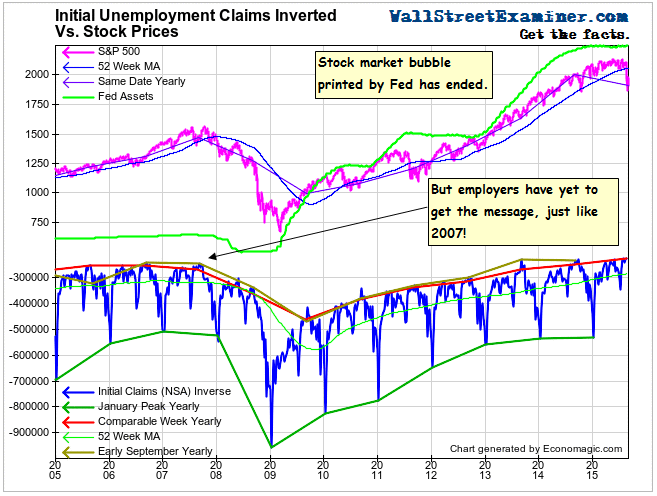 Population has been growing and the size of the workforce has as well, although not as fast as population. To get a better idea of how the claims data is performing over time, I normalize it based on the size of monthly nonfarm payrolls. Here’s where we can see just how extraordinary the current levels are. There were 1,626 claims per million of nonfarm payroll employees in the current week. This was a record low for the last week of August, well below the 2007 previous record of 1,890.

The 2007 extreme occurred after stocks had peaked, but just before they broke down and just before the carnage of mass layoffs that was to begin a couple of months later. Employers were still clueless that the end of the housing bubble would have devastating effects. If they were clueless then, they are in an advanced state of delirium and delusion now.

“However, it is absolutely normal for employers to completely miss the signs of impending doom.

“In recent weeks, Big Media (BM) and others have noted the fact that claims were recently lower than the record low of 1973. What they failed to mention was that that low came well after the Dow reached an all time high in January of that year. The devastating 1973-74 bear market, which cut the value of stocks by 50%, was in its early stages. This was an early example of employers being late to the funeral.

“As a result of the fact that employers apparently tend to take their cues from stock prices, we cannot depend on the next downturn in the claims data to give us advance warning of a decline in stock prices, although there should at least be concurrent confirmation. However, history shows that the fact that claims are at record lows is warning enough! In this case, the warning has lasted far longer than ever before.

I track the daily real time Federal Withholding Tax data in the Wall Street Examiner Pro Trader- Federal Revenues report. The year to year growth rate in withholding taxes in real time was running at a whopping +6.6% in nominal terms as of August 28. That’s equivalent to around 4.5% adjusted for wage inflation.

I will be updating that data in the next Pro Trader Federal Revenues report to be posted later today.