Inside Europe’s Next Crisis: Why Everyone Is Finally Panicking About Italian Banks

Back in May 2013, we wrote an article titled “Europe’s EUR 500 Billion Ticking NPL Time Bomb” in which we laid out very simply what the biggest danger facing European banks was: non-performing, or bad, loans. 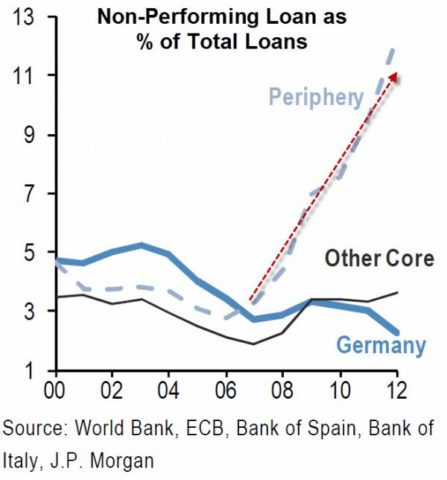 We further said, that “Europe’s non-performing loan problem is such an issue that there is increasing bluster that the ECB may take this garbage on to its balance sheet since policymakers realize that bad debts and non-performing loans (NPLs) reduce the capacity of banks to lend, hindering the monetary policy transmission mechanism. Bad debts consume capital and make banks more risk averse, especially with respect to lending to higher risk borrowers such as SMEs. With Italy (NPLs 13.4%) now following the same dismal trajectory of Spain’s bad debts, the situation is rapidly escalating (at an average of around 2.5% increase per year).

The conclusion was likewise simple:

“The bottom line is that at its core, it is all simply a bad-debt problem, and the more the bad debt, the greater the ultimate liability impairments become, including deposits. As we answered at the time – the real question in Europe is: how much impairment capacity is there in the various European nations before deposits have to be haircut? With Periphery non-performing loans totaling EUR 720bn across the whole of the Euro area in 2012 and EUR 500bn of which were with Peripheral banks.”

Now, three years later, the bomb appears to be on the verge of going off (or may have already quietly exploded), and nowhere is it more clear than in an exhaustive article written by the WSJ in which it focuses on Italy’s insolvent banking system, and blames – what else – the hundreds of billions in NPLs on bank books as the culprit behind Europe’s latest upcoming crisis.

To be sure, nothing new here, although it is a good recap of the Catch 22 Italy finds itself in: from the WSJ’s “Bad Debt Piled in Italian Banks Looms as Next Crisis”

Britain’s vote to leave the EU has produced dire predictions for the U.K. economy. The damage to the rest of Europe could be more immediate and potentially more serious. Nowhere is the risk concentrated more heavily than in the Italian banking sector. In Italy, 17% of banks’ loans are sour. That is nearly 10 times the level in the U.S., where, even at the worst of the 2008-09 financial crisis, it was only 5%. Among publicly traded banks in the eurozone, Italian lenders account for nearly half of total bad loans.

Years of lax lending standards left Italian banks ill-prepared when an economic slump sent bankruptcies soaring a few years ago. At one major bank, Banca Monte dei Paschi di Siena SpA, bad loans were so thick it assigned a team of 700 to deal with them and created a new unit to house them. Several weeks ago, the bank put the bad-credit unit up for sale, hoping a foreign partner would speed the liquidation process.

The U.K. vote to exit the European Union has compounded the strains on Europe’s banks in general and Italy’s in particular. It imperils the Monte dei Paschi sale, some bankers say, and creates fresh uncertainty at a time when lenders are struggling with ultralow and even negative interest rates and sluggish economic growth.

Brexit has many executives concerned that central banks will keep interest rates lower for longer than they might otherwise, in an attempt to counteract the slower growth—in the eurozone as well as Britain. European banks’ stocks slid after the vote, with those in Italy especially hurt. Shares in Monte dei Paschi are down roughly a third since the June 23 referendum. All this threatens to spark a crisis of confidence in Italian banks, analysts say. Although Italy has only one bank classified as globally significant under international banking regulations—UniCredit—some analysts say bank stresses worsened by Brexit could threaten Italy’s stability and, potentially, even that of the EU.

“Brexit could lead to a full-blown banking crisis in Italy,” said  Lorenzo Codogno, former director general at the Italian Treasury. “The risk of a eurozone meltdown is clearly there if Brexit concerns are not immediately addressed.”

A quick tangent on why in the aftermath of Brexit, Italian banks have been scrambling to get a special permission from Europe to bail-out (instead of ‘In’) local banks, as the alternative would likely spark a chaotic bank run.

When the financial crisis of late 2008 hit, Italian banks tended to roll over loans whose borrowers weren’t repaying on time, hoping an economic upswing would take care of the problem, say Italian bank executives.Italian banks’ struggles have led to the first serious test of a model the EU adopted two years ago for handling banking woes. The Italian government has sought EU permission to inject €40 billion into its banks to stabilize the system.

To do so would require bending an anti-bailout rule the bloc adopted in 2014 to force troubled banks’ stakeholders—shareholders, bondholders and some of their depositors as well—to pay a financial price before the country’s taxpayers must.

Rome argues that bending this rule would be a small price to pay for erecting a firewall against possible bank contagion stemming from Brexit. Italy’s EU partners, led by Germany, reject the idea, leaving Rome exposed to the potential for a banking crisis.

… Especially if the man who was in charge of Italy’s banks in 2008, Mario Draghi, were to be somehow identified as the key man responsible for Italy’s insolvent financial system. However, so far Merkel has been again a full-blown bailout, knowing the further “bending of Europe’s rules” would simply mean more German taxpayer money being flushed down the drain.

And while we wait for the outcome of this soap opera which as of last night has seen harsh words of frustration expressed by Italy’s PM Renzi and directed at Draghi, here are some numbers:

When the European Central Bank began supervising the eurozone’s largest banks in 2014, things got harder. The new supervisor applied tougher criteria than the Bank of Italy did for declaring loans impaired, say bankers. In April, it forced one bank to take bigger write-downs to bad loans before receiving its blessing to merge with another bank. The result is that impaired loans at Italian banks now exceed €360 billion—quadruple the 2008 level—and they continue to rise.

Banks’ attempts to unload some of the bad loans have largely flopped, with the banks and potential investors far apart on valuations. Banks have written down nonperforming loans to about 44% of their face value, but investors believe the true value is closer to 20% or 25%—implying an additional €40 billion in write-downs.

One reason for the low valuations is the enormous difficulty in unwinding a bad loan in Italy. Italy’s sclerotic courts take eight years, on average, to clear insolvency procedures. A quarter of cases take 12 years. Moreover, in many cases, the loan collateral is the family home of the owner of the business, or it is tied up in the business itself.

“There is a desperate need to make collateral liquid,” said Andrea Mignanelli, chief executive of Cerved Credit Management Group. “Right now, it gets stuck in auctions and judicial procedures that make cashing the loan very hard.”

The problem is that as of this moment, Rome finds itself in a lose-lose situation:

With investors pummeling its shares this year, UniCredit ousted its chief executive, Federico Ghizzoni. Last week, with its stock falling, it rushed to appoint a new CEO, Jean-Pierre Mustier, its former head of corporate and investment banking. In short order, Mr. Mustier must now present a convincing restructuring plan and raise as much as €9 billion to shore up investor confidence. UniCredit declined to comment. The Italian government pushed for a broad solution that would recapitalize banks and draw a line under the bad-loans crisis, when it appealed to the EU for permission to inject €40 billion into the lenders. The Italian government argues that without such a recapitalization move, Italy’s banking problems could mushroom into a broader crisis.

“There is an epidemic, and Italy is the patient that is sickest,” said Pierpaolo Baretta, an undersecretary at the Italian Economy Ministry. If “we don’t stop the epidemic, it will become everybody’s problem…The shock of Brexit has created a sense of urgency.”Italian Prime Minister Matteo Renzi pressed the issue in his meeting last week with German Chancellor Angela Merkel.

The European Commission, with strong backing from Berlin, has dismissed the push from the Italians. Some European officials privately expressed annoyance that Rome has been slow to deal with its banking problem and is paying the price in such volatile markets. Now, they say, the Italians are using Brexit to press for permission to bend the rules of a hard-fought banking regime.

Rome has criticized the EU’s new banking regime and doesn’t want to use “bail-in” rules that prescribe the order in which stakeholders must bear losses for winding down an ailing bank, in part because of the peculiarities of the Italian banking system. About €187 billion of bank bonds are in the hands of retail investors, whose holdings would be wiped out by a bank resolution under the new rules.

Last year, more than 100,000 investors in four small Italian banks that were wound up saw their investments wiped out. Some lost their life savings. The controversy exploded in December after Italian news media reported that a retiree committed suicide after losing €110,000 in savings invested in one of the banks.

Such problems carry little truck in Brussels. “Every grandmother has bought bank shares,” said one EU official. “That’s how it’s presented to us…. This work has to be done within the rules, using all the flexibility there is.”

In that case, “every grandmother” in Italy has a big problem then, but not nearly as big as Renzi, because if the bank run (ahead of bail-ins) begins, it will all be over for Europe’s most insolvent banking system.

Finally, while none of the above is actually new – we have been covering it for over 5 years – so far Europe, and Wall Street, had been successful in ignoring it. As the latest JPM “Early Look at the Market” shows, everyone’s attention is finally, and fully, on Italy. 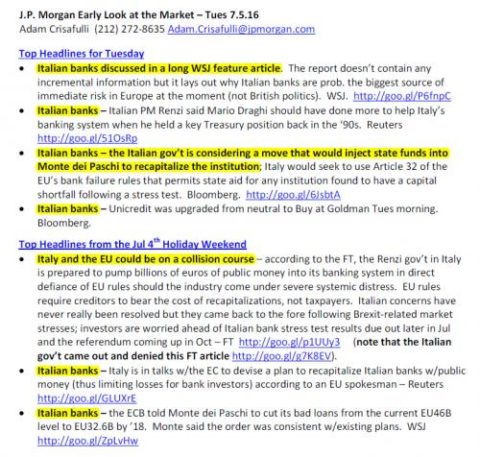 Source: A Look Inside Europe’s Next Crisis: Why Everyone Is Finally Panicking About Italian Banks