Two weeks ago, in our latest report on the Hong Kong housing market, we observed that according to the local Centaline Property Agency total Hong Kong property transactions in January were on track to register the worst month since 1991, when it started compiling monthly figures. In other words, the biggest drop in recorded history.

Centaline estimated that only 3,000 transactions will have registered with developers slowing down new launches, while only 394 units were sold in the first 27 days of January, 80.3 per cent lower than the 2,127 deals lodged in December. Meanwhile, sales of used homes fell by a fifth to 1,276 deals in January.

But while the number of transactions was crashing, prices – while down 10% from the recent all time highs… 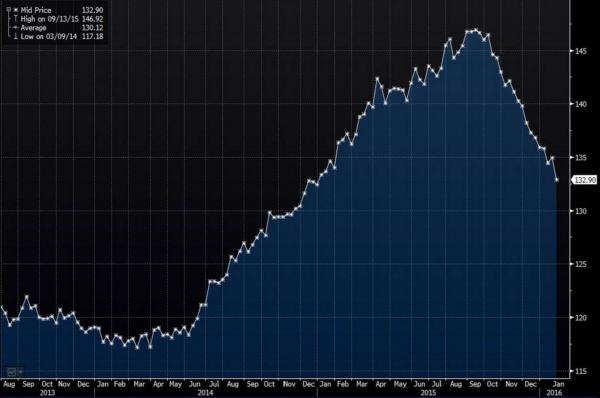 … have been relatively tame, as sellers have not been desperate enough to hit the collapsing bids, yet.

Yet one place that provides some glimpse into true price discovery was the just completed government tender, in which a parcel of land sold by the government in the New Territories went for nearly 70% less per square foot than a similar transaction in September.

In the deal that could not be postponed “because the seller waits for a better market”, the 405,756 square foot (37,696 square meter) site in Tai Po sold for HK$2.13 billion ($274 million) or HK$1,904 per square foot, in a tender that closed on Feb. 12, according to the Hong Kong Lands Department website. According to Bloomberg, the buyer was Asia Metro Investment Ltd., a subsidiary of China Overseas Land & Investment Ltd.

As we have noted previously, the Hong Kong housing bubble has already suffered a “spectacular collapse”, and all that is left now is confirmation not only in terms of transactions, but prices. We already had the former; now we have the latter. 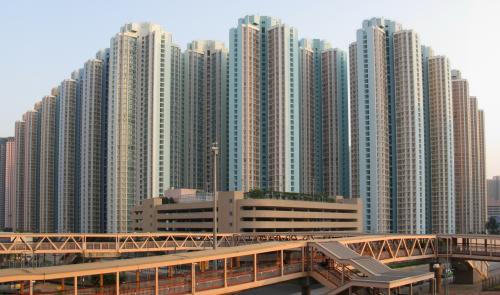 Hong Kong home prices surged 370 percent from their 2003 trough through the September peak before the correction began, spurred by a rising supply of housing and a slowdown in China. As Bloomberg notes, lower prices paid for land could eventually lead to cheaper home prices down the road, and are viewed as a leading indicator of the negative sentiment on the market.

Making matters worse is that just like in the oil market, Hong Kong is now facing a spike in supply: “adding to the downward pressure on prices was the government on Jan. 13 raising its five-year target for new housing supply to 97,100 new homes, up from a previous estimate of 77,100 units.”

It is unclear who will be the biggest victims of Hong Kong’s housing bust: recent land sales have been dominated by mainland Chinese developers. Hong Kong property companies have been less active, as they’re struggling to sell existing units in their inventories and offering discounts of more than 12 percent to entice new buyers.

Yet stunningly, even the bursting of the Hong Kong housing bubble will not be fully clear as Chinese construction companies are merely using the HK real estate market as yet another way to circumvent Chinese capital controls and park their funds offshore: according to Nicole Wong, head of property research at CLSA Ltd. said mainland companies are outbidding their Hong Kong counterparts because they expect lower margins and are also anxious to park money offshore given the devaluation of the yuan.

One can imagine where HK real estate prices would be, if it weren’t for the ingenuity of mainlanders to park hot money into one of the few remaining venues willing to accept it, and that hasn’t been blocked by Beijing.

Still, local real estate experts remain “cautiously optimistic” even in the face of a property tsunami:

Wong cautioned against drawing conclusions on the basis of two land transactions, as it’s impossible to find two sites that are identical. She estimates land prices overall have fallen about 15 percent since their peak, based on the assumption that housing prices have fallen about 10 percent and land accounts for about 60 percent of overall development costs.

Ironically, it was Hong Kong Chief Executive Leung Chun Ying who introduced a raft of measures to cool the property market since 2012 after a rally in home prices fueled complaints of a widening wealth gap. Well, can now now undo those measures. Now that prices are finally starting to fall, property analysts including Raymond Ngai of Bank of America Corp.’s Merrill Lynch unit expect the government will ease the measures and pray to reflate the bubble once more.

However, one way to be absolutely certain that the housing crash will be far worse before all is said and done, comes courtesy of Standard & Poor’s which just issued a report today projecting a 10% to 15% decline in property prices, and said that they would need to fall 30 percent before triggering a ratings downgrade on Hong Kong developers. With S&P’s track record, a 50% collapse is now virtually assured.

The ultimate winner, however, from the bursting of the HK housing bubble are local residents, for whom housing may finally become affordable once again: Hong Kong ranked as the most expensive housing market among 87 major metropolitan regions, according to the annual Demographia International Housing Affordability Survey, which used data from the third quarter of 2015. The median home in Hong Kong costs 19 times the median annual pretax household income, the highest multiple Demographia has measured, and up from 17 in last year’s report, according to the company’s website.