The TBAC is a committee of Primary Dealers tasked by the Fed to provide it with a quarterly forecast of how much Treasury debt will be needed to cover the deficit for the current and next quarters. It has persistently overestimated the strength of the US economy and government tax collections this year. Treasury supply has therefore consistently run above forecast. That may have helped to put a lid on the bull markets in bonds and stocks in recent months, but it hasn’t been sufficient to reverse the market tide.

It hasn’t stopped markets from bumping against the highs because the Fed’s friends, the ECB and BoJ, have printed much more than that, and then with NIRP have driven capital out of Europe and Japan toward the US.

And while the Fed hasn’t printed any new money lately, it continues to cash out the Primary Dealers every month with its purchases of MBS. These MBS purchases are 30-60 day forwards that settle at the end of the month.

The Fed’s usual mid month MBS purchase settlements totaled $37.5 billion in September, up slightly from $36.2 in August. The Fed announced that it will purchase another $44 billion of forwards in September-October, after buying just $31 billion in July-August. The October settlement should be in the $35-40 billion range.

The fall in mortgage rates early this summer caused an increase in refinancing by homeowners. These refi loans settled mostly in August triggering paydowns of the Fed’s holdings. The Fed replaces those by buying more MBS from Primary Dealers  in the following month. The increase in MBS paydowns  necessitated the increase in the Fed’s purchases from dealers. That gives the dealers a little more cash to play with in the market in the month of the settlements.

Against this economic backdrop, the Committee reviewed Treasury’s August 2016 Quarterly Refunding Presentation to the TBAC. During the second quarter of 2016, corporate tax revenues have been weaker than during the equivalent period last year, potentially attributable to smaller corporate profits and the extension of bonus depreciation. Fiscal year to date, Treasury net outlays were $106 billion higher than last year, mainly reflecting larger interest expenses [emphasis mine]. In addition, Medicare expenditures were higher by $27 billion, importantly due to an $11 billion increase in payments made to prescription drug plans.

Treasury projects a net marketable borrowing need of $774 billion for FY 2016. This estimate includes a $151 billion year-over-year increase in Treasury’s cash balance, which stood at $364 billion in June. In FY 2017, the Office of Management and Budget estimates that borrowing from the public will decline to $572 billion. In terms of risks to the baseline, the Treasury’s borrowing from the public could rise sizably if the Federal Reserve ceases reinvestment of maturing Treasury securities held in the SOMA portfolio. In terms of portfolio metrics, bid-to-cover ratios for TIPS and shorter-dated coupons have fallen significantly in recent months, while bills have been little changed. By contrast, longer-dated coupon bit-to-cover ratios are broadly higher.

While very unlikely that the Fed will allow a significant portion of its Treasury holdings to run off, we can’t ignore the possibility. It would add to Treasury supply and have the potential to disrupt the bond market, with spillover effects in stocks. Whether the Fed and Treasury would have the luxury to attempt it would depend on largely on the ECB and BoJ. Any increase in Treasury supply would contribute to a rise in bond yields. The problem  would be worse if the BoJ and ECB were to stop printing money. Also, if the US economy continues to run weaker than expected, Treasury offerings would increase as the budget deficit widens.

These would all normally be bearish factors over the longer haul. But in this new world where central banks target securities prices, we always need to keep an eye on the Fed. It could turn on the printing presses at any time. Traders on the short side of the market need to keep this in mind.

This report is excerpted from the Wall Street Examiner Pro Trader monthly report on the supply and demand factors driving the market for US Treasuries. Try the service for 90 days risk free.

The TBAC report had an interesting chart showing how much the Treasury would need to raise each year if the Fed elects not to roll over maturing holdings. Additional supply would total around $1.2 trillion over 7 years, peaking at $384 billion in 2019. 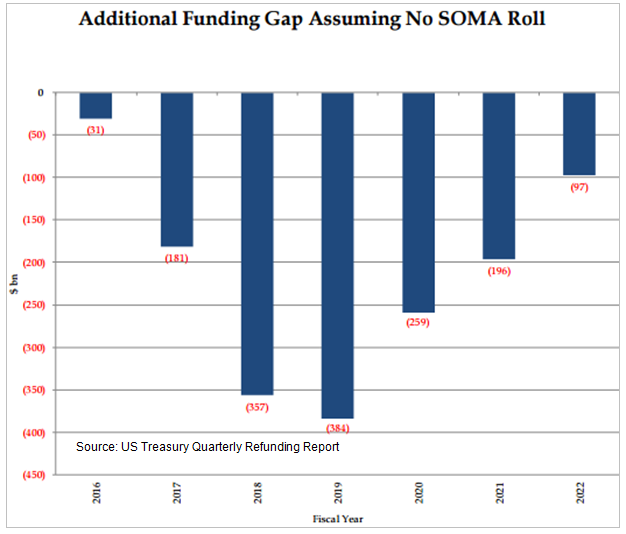 These totals would only be manageable in the unthinkable case that the BoJ and ECB were still buying $2 trillion a year in existing securities. That creates excess cash in the accounts of dealers and investors in Europe and Japan, some of which flees to the US. the Fed could theoretically reduce the size of its balance sheet if the BoJ and ECB continued to print. Liquidity anywhere is liquidity everywhere and some of that liquidity always tends to flow into the US via its markets.

However, if the BoJ and ECB end their QE programs, the Fed would not be able to “normalize” its balance sheet without a massive disruption of the Treasury market that would spill over into stocks. If the Fed did not roll over it’s enormous holdings of Treasuries, it would force the Treasury to raise that cash in the market, adding tremendous supply pressure when the funds available to absorb the additional supply would be reduced.

Meanwhile, the US Treasury has been building an enormous pile of cash on the heels of a TBAC recommendation last year that the Federal Government should raise a $500 billion rainy day fund. That fund is now up to about $350 billion. I had suggested that some of that could be used to boost spending to boost the economy or to pay down debt prior to the election to tilt the odds in favor of Clinton.

There’s little evidence so far that the government is using its cash pile to manipulate the economy or the market and boost Hillary Clinton’s election chances. However, there are still 5 weeks till the election and once again the Treasury is sitting on record cash. I would continue to be on the lookout for more Treasury spending in October. You can follow the Treasury’s cash balance in real time in the Daily Treasury Statement.

Meanwhile, the cash buildup to a new record in September has been extremely rapid and large. When the Treasury pulls cash out of the banking system and parks it in its own account at the Fed, the effect is similar to the Fed temporarily tightening.  If this Treasury cash buildup isn’t reversed, past performance suggests that the stock market should sell off over the next couple of months.  That selloff would have the potential trigger instability in world markets as traders rush to liquidate to pay down margin, either voluntarily, or in response to margin calls. 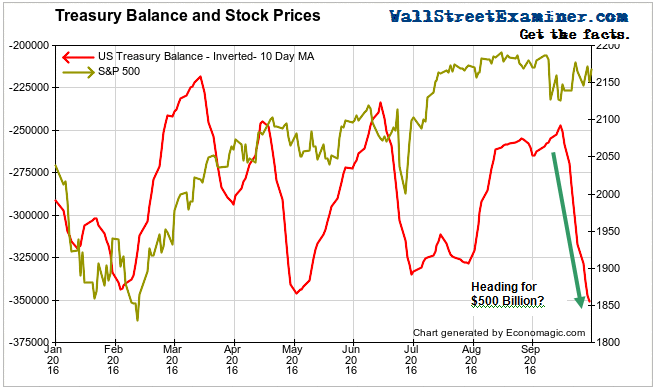 This report is excerpted from the Wall Street Examiner Pro Trader monthly report on the supply and demand factors driving the market for US Treasuries. Try the service for 90 days risk free.